And what of WOS, the station in the Missouri Capitol? That story is better known. Harry Snodgrass and the State Prison Band were not the only musicians on the air from that historic station in its earliest days. Charlie Walden has noted that the station aired a performance by three men who later became known as “The Old Tyme String Trio,” of Louie Barton, a fiddler from Jefferson City, bass player George Schrimpf, and guitar-player Noland Wrightman. Walden notes the group became the “house band.” for KOW for some time. He suggests legislators might have gone home and recruited other performers for the station’s Friday night fiddling contests.

On December 31, 1925, the station held its first fiddlers contest, broadcast live. Walden says 82 people from 27 counties competed on a broadcast that lasted “well into the morning of New Year’s Day, 1926.” Listeners were encouraged to vote by sending letters, telegrams and postcards, and by making telephone calls to the station. More than 5,500 communications were received. Almost two weeks after the event, with the counting done, the announcement was made that Thomas Jasper Massie of Nevada had won. Other contests were held for other instrumentalists, too. For instance, Lee W. Hall of Warrensburg was named “State Champion Harmonicist” in January, 1928.

The station always had a small permanent staff. The 1925-26 Official State Manual lists a new engineer, A. A. Murray, who had been a radio engineer in Kansas City, and a new announcer, C. C. Branaman, who had been a telegrapher in Green City before taking his job at WOS.

The next “Blue Book” noted the station continued to be a “farmers” radio station, was still using the original transmitter, and was still in the dome. Former Kirksville journalist and businessman Jack D. Heiny had become the station announcer, a position he would occupy until 1930. Friends called him “Cap,” because of his war experience. Walden says his voice was described as a “soft southern drawl, listened to nightly by war buddies all over the country.” The station had two engineers, H. R. Rawson and L. D. Scott. Rawson had been a radio engineer before taking the state job. But Scott had been a mechanic before joining WOS.”

“There was a time in the history of our country when the general public was not particularly interested in market reports. Marketing was not looked upon as a problem–people lived simply and produced their own foodstuffs and the most of the material for clothes,” said the state manual, “In those days the farmer did not market much of his product–and what there was to market usually consisted of a few bushels of corn or wheat, a few hogs or some poultry and eggs which were taken to a nearby town and sold to a local merchant or exchanged for some of the other necessities of life. Those days have passed.”

“We are living in a new age,” said the manual article. It went on to note, “The farmer of today desires to know the changes in the market just as soon as possible. A delay in getting these reports may mean many dollars to him, and for this reason radio market reports have become of vital importance and especially to the farmers of Missouri. The State Marketing Bureau broadcasting the market reports hourly over WOS enables the farmer to get the desired market at such a time as to be of greatest service to him in the marketing of his products.”

Before and after each broadcast, the weather forecast was given. “The importance of this information cannot be overestimated,” reported the 1927-28 Official Manual. “Thousands of farmers all over the state and adjoining states wait for the WOS weather report, inasmuch as it gives them a better insight as to the opportune time to cut down the hay, to begin the thrashing and to do many other things where the hazards of weather conditions are a problem that may determine the profits or the loss to the farmer.”

At 8:05 each Friday night, the “WOS Farmers’ Institute was broadcast, a special feature which on some other nights was known as “The WOS Farm Question Box.” Among those who regularly appeared on these shows was State Veterinarian Homer Wilson; Dairy Commissioner E. G. Bennett, Marketing Commissioner C. P. Anderson, and R. M. Elkins of the State Marketing Bureau. Among others appearing from time to time were State Forester Frederick Dunlap, State Apiarist Arthur Allen, Farmers’ Institute Lecturer Samuel M. Jordan, federal agriculture statistician E. A. Logan, and Jewell Mayes. Other programming came from The Missouri Association, a joint effort of “various chambers of commerce, educational institutions, community state and co-operative organizations.”

The manual reported, “These programs have not only been of interest to the WOS radio audience, but are helping to sell Missouri to both our home people and to the public at large. Listeners wanting to know the program schedule for the next month got it on the 20th of each preceding month on the front page of the Missouri Marketing Bulletin. “Sickness or other conditions or circumstances over which we have no control may make it necessary to make changes, but such is not often the case,” the Manual reported. But the author of the Manual’s article on WOS and the Marketing Bureau was just getting warmed up.

“To the farmer and the farmer’s family, WOS has become a vital necessity of their economic, social, spiritual and intellectual life,” the article continued, “Its greatest contribution to civilization depends not so much on what it does for the people who live in the big cities, but upon the influence that it has on the life and the action of our farm population. It will help to relieve the farmer and his family from the sense of isolation which perhaps is the greatest handicap of agricultural life.”

The author also claimed the station broadened social, spiritual, and religious activities of the listeners. It would help overcome class and sectional differences, guiding the people to a more unified life “with other elements of our citizenship.”

“It will help to make possible a system of agricultural colleges which will be open to all the thirty million Americans who now live on farms. It helps keep the boys and girls on the farm, thus preserving for agricultural development the energies of the thousands of ambitious young men and women who are drawn away each year to urban pursuits,” the article gushed. “WOS is destined to become one of the most effective elements in the business equipment of the Missouri farmer,” it went on. Oh, but there was more:

“Above and beyond its utilitarian uses, the message that WOS brings to the farmer and his family, is the message of human contact, human sympathy, and culture.”

And it concluded, “If the men and women of the farm are not to continue to drift away from the land, to herd themselves in the great cities, to swell the ranks of industrial labor and leave the farm unmanned, agricultural life must be made more attractive. The farmer deserves to share and should share in many of the educational opportunities now enjoyed only by city dwellers; his children should not be without the educational advantages which thinly populated communities cannot afford at present…”

The next state manual, for 1929-30, noted, “WOS is credited, by those who have investigated, as having been the best publicity factor that Missouri has ever had.” All of the farm organizations in the state–the Farmers Union, the Grange, the Missouri Farm Bureau, and the Missouri Farmers Association were welcome to use the station. And the marketing bureau reported, “Sundry Missouri colleges use this station from time to time.” Heiny remained as the announcer, at $50 a week. Farmington resident Fergus M. Sloan, a former radio transmission and construction engineer had become the WOS Chief engineer at the same salary. His assistant was Walter W. Wilson of Jefferson City, paid $150 a month. Remaining as the leased wire operator at WOS was E. W. Weigand, whose salary was split between the state and federal governments. He was paid $65 a month.

It was not a fulltime station. Programs were often separated by dead air. Various educational, agricultural, and entertainment programs were broadcast at 8 p.m. on Monday, Wednesday, and Friday nights. The station was on the air from 9 to 5 each daily, and then back on the air at 7 p.m. (as needed) on Wednesday and Friday nights. WOS moved to the 630 position on the radio dial as it neared the end of its first decade.

Control of the station passed from the agriculture department to the newly-created Missouri Highway Patrol on July 24, 1933 under a law passed by the legislature. The station already had been used since January for broadcasting regular and emergency bulletins for the Patrol. “Each patrol car is equipped with a radio set for the reception of these broadcasts,” reported the State Manual of 1933-34, “In addition to the time used on WOS, radio stations KFRU, at Columbia, and KGBX, at Springfield, have given the highest type of cooperation by broadcasting police bulletins on request. It was, of course, in the days before two-way radios in police cars.

Troopers listened to their radios for messages telling them they needed to stop at the nearest telephone and call headquarters for information, or that they needed to go somewhere for an accident, a robber, or the like. Former Kansas City sound equipment operator Pemberton Gordon had become the station director, with engineering help from former St. Louis sales engineer Stuart Mahanay and former Jefferson City “radiotrician” Fred Wickham as the stations’ chief operator. Ex-taxi driver Otis Jones of Jefferson City was paid $15 a month as janitor.

But the station’s days were numbered. State government underwent a reorganization in 1933 eliminated the State Board of Agriculture and its Marketing Bureau with the State Department of Agriculture. The station ws turned over to the Highway Patrol. Within two years, the patrol would have short wave radios for communication with troopers. The Federal Communications Commission had assigned the frequency of 1674 kilocycles to the Highway patrol, with the call letters of KTUK. The station would broadcast at 2,500 watts in the daytime and 1,000 watts at night. The role of WOS as a communications arm of the state, whether for agriculture or public safety ended on early in 1936, and the call letters were stricken from the FCC’s list of active stations on March 27.

But Missouri’s Capital City was not to be without a radio station for very long. In 1937, a new station went on the air. Organizers of it were well aware of the heritage of the city’s first radio station.

So they called the new station KWOS. 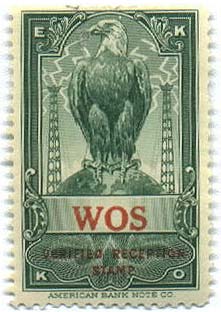 and 1930s for many early radio stations. They were sent to listeners as verification of receiving the station’s signal. Several albums were produced by the EKKO company to be used for collecting the stamps. Wayne Gilbert and Charles R. Combs, who have a website called “Antique Radio Classified,” refer to these stamps as the “rarest of radio history’s artifacts.”

They were used in the same way QSL cards are used today. More than 700 stations used the stamps to promote themselves and early radio. A listener was supposed to be able to hear the station’s call letters in order to receive a stamp. By the 1930s, the radio industry had changed so much that collecting EKKO stamps or the acknowledgement cards to which they were attached, was no longer of widespread interest.