We will begin to find out tomorrow.

Today has been the last day for me to be called the  News Director of the Missourinet, a title I have carried since November 1, 1974.  When people have asked the question I hope all of you will someday hear, I have answered, “I’m more concerned with what I WON”T do.”

No more crawling out of bed at 4:30 a.m. on winter days when it’s zero degrees, the roads are ice rinks, and the wind is full of sleet and snow—and scalpels–and know that I’m the one who has to find a way to get to the newsroom for the first newscast of the day. (I recall the day the parking lot was so icy that I crawled to the front door because I couldn’t get enough traction to step up onto the sidewalk.)

No more around-the-clock days waiting for the Senate–and for the first 15 years or so the House–to quit talking (after which reporters like those of us at the Missourinet often have two or three more hours of work to get stories ready for you to hear and read the next morning).

No more sleeping at the office for a couple of hours after wrapping up election night coverage and then starting the day-after coverage, doing newscasts until staff members who have been in places such as Kansas City and St. Louis where they’ve been covering candidate victory/concession speeches return.

No more long hours, irregular meals, and snacks that aren’t good for a reporter’s health.

No more trying to penetrate the brick walls the Nixon administration has erected between reporters and news sources who know enough about an issue to answer questions the public should hear.

But retirement is a sacrifice, too.

It means an end to being on the front lines when things happen, witnessing the seldom-smooth operations of government, and then having the pleasure of telling people what all of it means. Mark Twain was wrong. Sometimes the making of sausage is something to see.  And appreciate.

It means not being able to walk into the Capitol as one of the many people who are SOMEBODY in the grand process of government.

It means having no more opportunity than my neighbors have to walk up to one of the players in that process and ask them a pointed question my neighbors could never have a chance to ask. And get an answer.

I could go on and on.

Will I miss those things?   Not the first bunch, no.  But the second tier?  Sure.

Being a reporter is one of the greatest jobs in the world.  I’ve told a lot of journalism students that I can’t think of anything I’d rather have done with my life.  To be where important things happen and then get paid to tell people about them—that beats any other job I can think of. 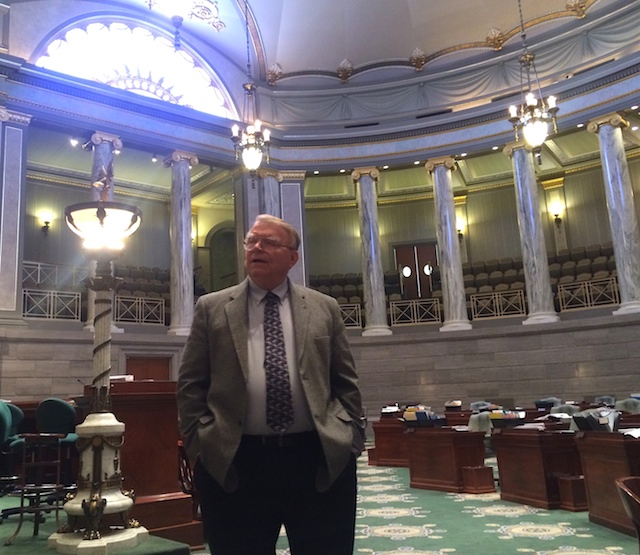 Some things will continue.  The Missourinet wants me to keep doing the “Across Our Wide Missouri” daily historical program (if no station carries the program in your area, look for it elsewhere here on our webpage).  There might still be contributions to this blog or another one–we haven’t figured that out yet.  There might be some special projects to do.  We’ll see how it goes.

Some have suggested seeking public office.  Not on your life.  If I were to put a party label on my name, I would be throwing away a career that I hope has been an annoyance to people of all political philosophies.

Managing Editor Mike Lear, a terrific reporter, is the new voice of the Missourinet.  He and a new staff still have the responsibility of telling our consumers what state government is doing for, to, and with Missourians.   They’ll be telling those stories on a growing number of different platforms, as they’re called these days, as the news media change and as the public finds new ways to stay informed (I hope the public wants to stay informed, not just managed or manipulated).   But the responsibility is unchanged and Mike is capable of leading the staff in meeting it.

And a final observation in this too-lengthy adios:

From time to time in these columns, this observer has written critically about government and the people who serve in it.  On balance we probably have been more critical than praiseworthy.  But we read something long ago from a minister who responded to a complaint that people only talk about bad teen-agers and never have nice things to say about the ones that don’t cause trouble.  True, he said, but there’s nothing praiseworthy about doing what you’re supposed to do.  It’s only when you fail to meet society’s expectations that you get the criticism you deserve.  It’s only when you exceed those expectations that you deserve praise.  That observation applies to people in all walks of life, not just to teenagers, but especially to those in political office.

Former President Theodore Roosevelt, speaking in the Sorbonne in Paris in 1910, offered the famous observation, “It is not the critic who counts; not the man who points out how the strong man stumbles, or where the doer of deeds could have done them better.  The credit belongs to the man who is actually in the arena, whose face is marred by dust and sweat and blood…”

Let us remember that politics is a human process filled with error and shortcomings and sometimes a lack of nobility or what Roosevelt called “high achievement.”  It nonetheless takes courage to seek a place among those in the arena, especially in today’s climate of anonymous campaign character assassinations. Those who win should have the courage to serve in that arena, understanding that all who seek or demand help (often with an “or else” attached) are not necessarily those who most need help and to act accordingly.

Roosevelt had a less-quotable but no less worthy observation elsewhere in the same speech.  “In the long run, success or failure will be conditioned upon the way in which the average man, the average woman, does his or her duty, first in the ordinary, every-day affairs of life, and next in those great occasional cries which call for heroic virtues.  The average citizen must be a good citizen if your republics are to succeed.  The stream will not permanently rise higher than the main source; and the main source of national power and national greatness is found in the average citizenship of the nation.  Therefore it behooves us to do our best to see that the standard of the average citizen is kept high; and the average cannot be kept high unless the standard of the leaders is very much higher.”

It’s time to be one of them, reading and hearing the things those in the Capitol Press Corps tell me so that I will be a good, not average, citizen who will expect the standard of our leaders to always be higher.