In a conference call with reporters from around the globe Monday, Governor Jay Nixon explained an executive order he issued Monday, saying, “the St. Louis County Police Department will have command and operational control over security in the City of Ferguson in areas of protest and acts of civil disobedience should such activities occur instead of the Ferguson Police Department in that jurisdiction.” 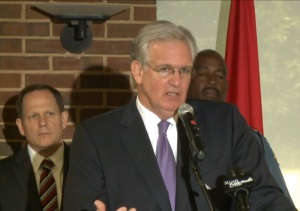 The County Police along with the Highway Patrol and the St. Louis City Police make up a unified command in charge of Nixon’s stated goals of protecting the public and allowing protesters to be heard, with the National Guard having been activated to support those agencies.

But to the issue of policing any protests that do arise, Nixon struggled when asked if, because he had put the Highway Patrol in the unified command and declared a state of emergency, the “buck stops” with him.

“Well I mean we’re um … it uh … it uh … you know … our goal here is, is to, is to, you know, keep the peace and allow folks voices to be heard, and in that balance I’m attempting … I am using the resources we have to marshal to be predictable for both those pillars,” Nixon said.

He continued, “I don’t spend a tremendous amount of time personalizing this vis-a-vis me. I’m trying to make sure that we move forward in a predictable, peaceful manner that plans for all contingencies that might occur so that people of a disparate group of opinions and actions can be heard while at the same time the property and persons of people in the St. Louis region are protected … I prefer not to be a commentator on it.”

Asked whether one agency is ultimately in charge, Nixon said, “I feel good about the … we’ve, we’ve worked hard to establish a unified command, to outline the responsibilities, and now with the additional assets provided by my order today of the Missouri National Guard, you know, we have, we’ve worked through a number of operational issues the folks have and I’ll only say that our efforts today are on top of a lot of things that have been known in the last 100 days to make sure that we’re prepared for any contingency.

Nixon’s apparent difficulty answering that question comes at a bad time and on an international stage as he works to stay ahead of unrest in Ferguson, after critics have accused him of being disengaged from the unrest there; a charge he has strongly refuted.

AUDIO:  Listen to Governor Nixon’s answer regarding the policing of protests, 2:34