Your Missourinet Naval Affairs Correspondent here again.
The visit on the USS Theodore Roosevelt obviously made a big impression on all of us. There are a few observations we want to share with you about life in this floating city before we resume the nasty business of examining Missouri politics.
The deck was quiet the morning after the night launches. We were allowed to roam pretty freely, spending a lot of our time talking to a lot of the folks who otherwise would be directing traffic coming in and flying off.
The ship was practicing with its accompanying destroyers the straight line sailing that would be used when the convoy went through, for example, the Straits of Hormuz. 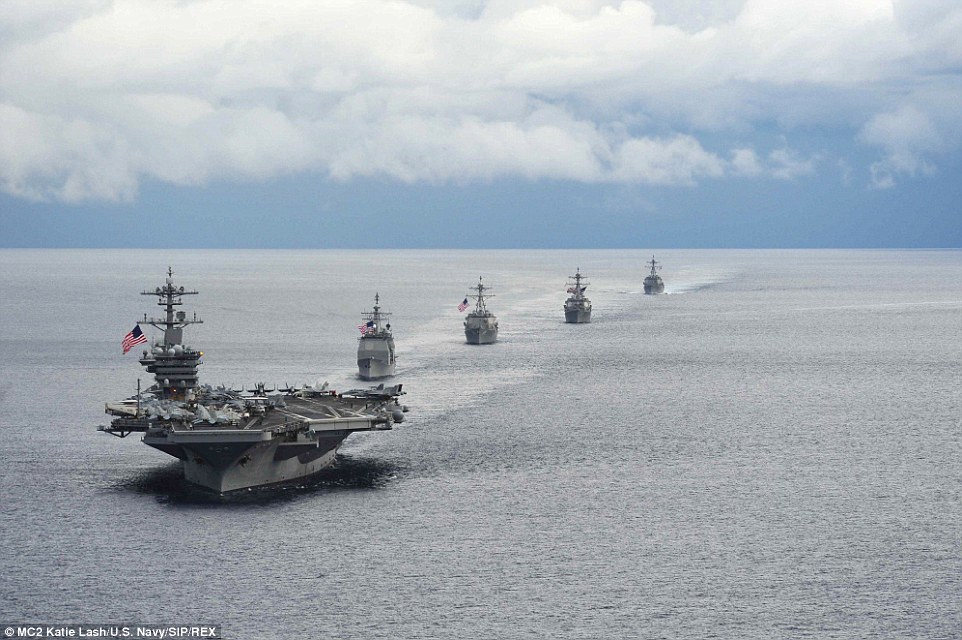 Had any of us gone down the numerous ladders we went up and down during this trip sooner than we expected, we might have wound up in the ship’s hospital. Living conditions on ships are pretty basic and utilitarian and hospital care is no different. Our guide, Captain Stephen Paulette, is the ship’s oral surgeon and chief dental officer, which is why his shirt proclaims him a “Jawdoc.” 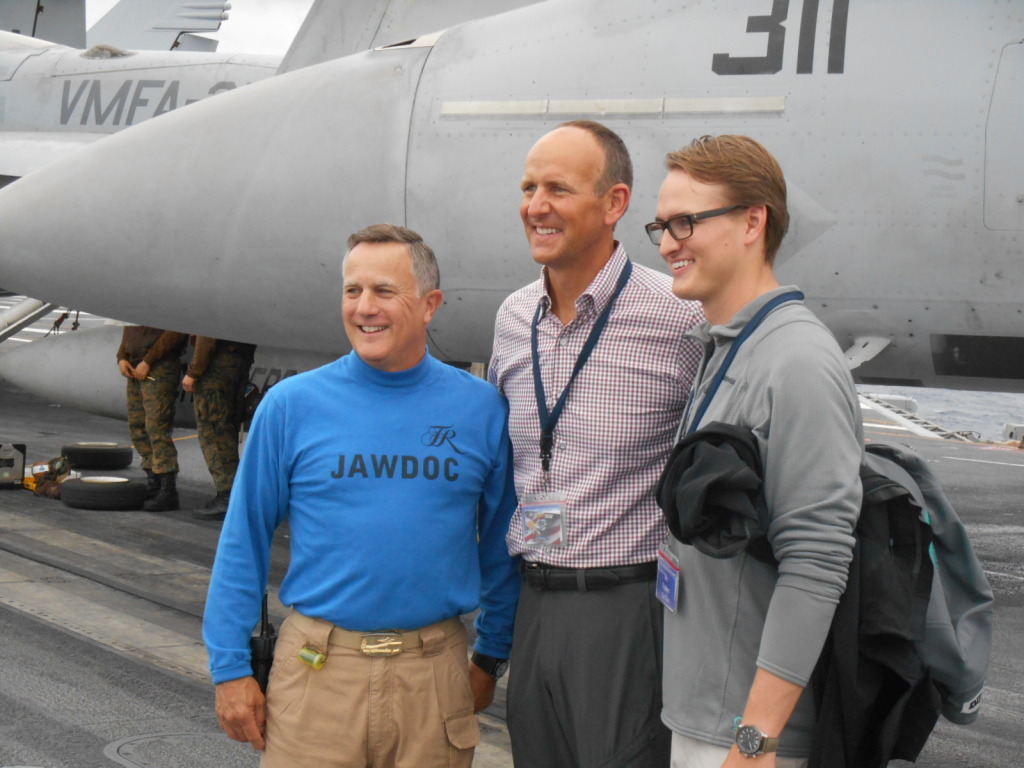 He had been in the Reserves but got tired of being called up so often, interrupting his life and his practice, that he decided just to join the regular Navy. And he says he’s having a great time.
People head to the medical section of the ship for all of the usual problems that get landlubbers into doctors’ offices and the ship is ready for just about anything, even births. Really, really, really serious stuff involves flying the ailing person to a land-based hospital. 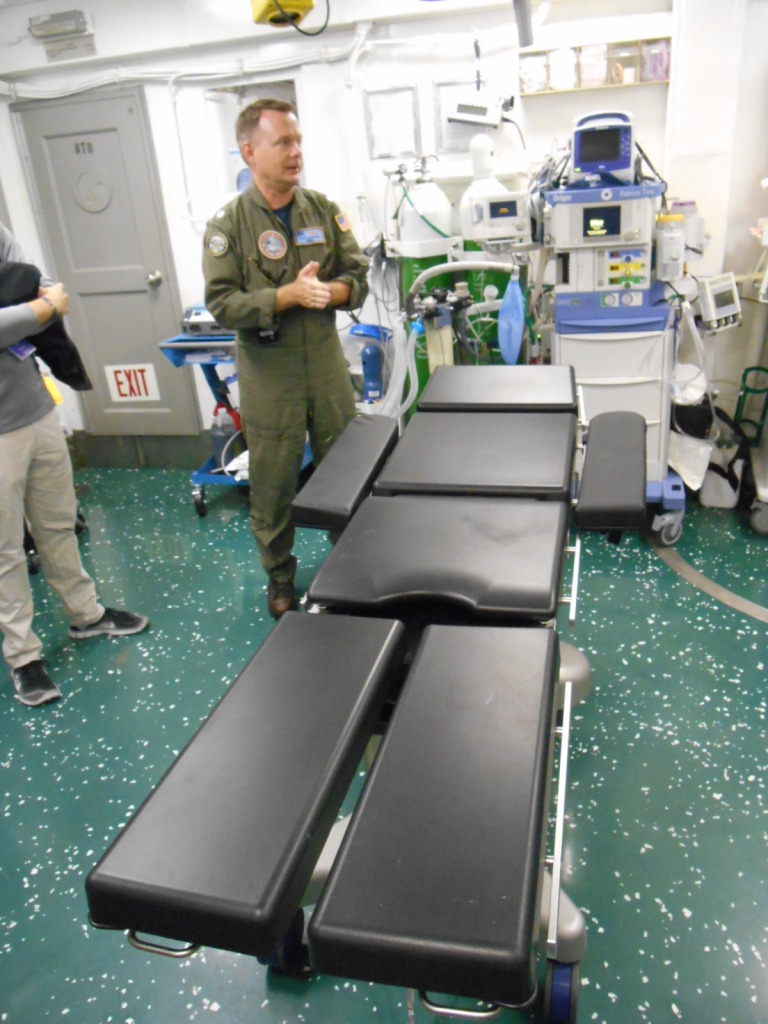 The operating room might not be as impressive as operating rooms at our local hospitals but luxuries found in stateside hospitals that are not really functional and basic aren’t to be found aboard ship. If it’s not utilitarian, it’s not necessary. So don’t expect to find nicely-carpeted and soothingly-lighted waiting rooms on an aircraft carrier. The care is excellent. Just don’t expect frills.
Lunch and a final visit with Captain Grieco in his office wrapped things up for us. 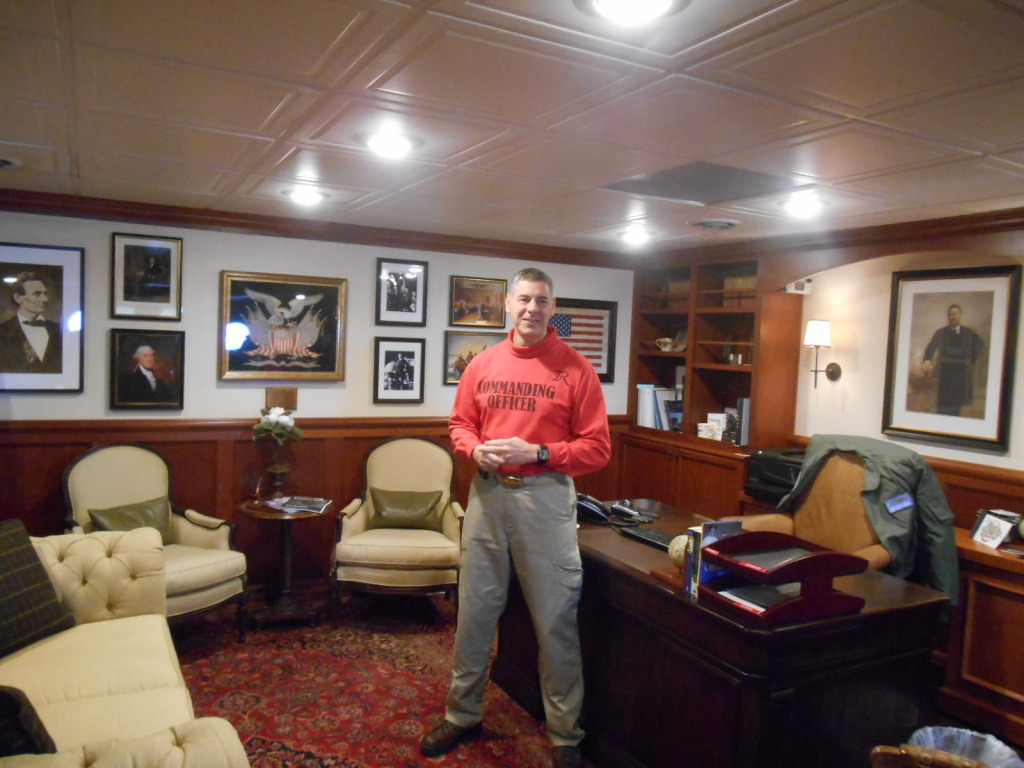 He told us the story of the night President Roosevelt slipped away from his security detail, paddled a boat across to a Navy base, and went for a submarine ride, becoming the first President to go under in a submarine. His security people were not pleased when he returned.
The carrier has a small museum of TR memorabilia, including a big stick that somebody gave him—he was given a lot of big sticks. 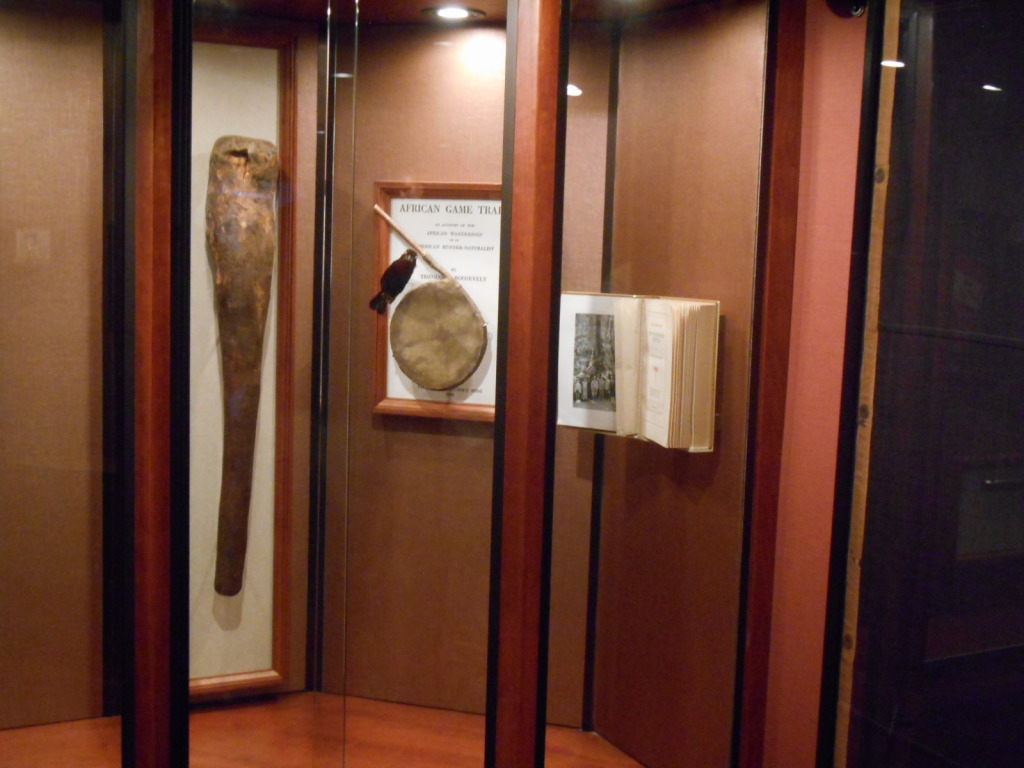 Roosevelt, incidentally, is the first President to also fly. He was campaigning in for Missouri Republicans in 1910 when Arch Hoxsey took him up in a Wright biplane in St. Louis. The Library of Congress has a video of that day.

At the end, as Roosevelt is getting off of Hoxsey’s airplane, you’ll see Missouri’ Governor Herbert Hadley briefly. Hadley was Roosevelt’s floor manager at the 1912 Republican Convention where Roosevelt’s challenge to the re-nomination of William Howard Taft was rebuffed, leading him to call for a new Progressive Party for disenchanted Republicans that became known as the “Bull Moose” Party. 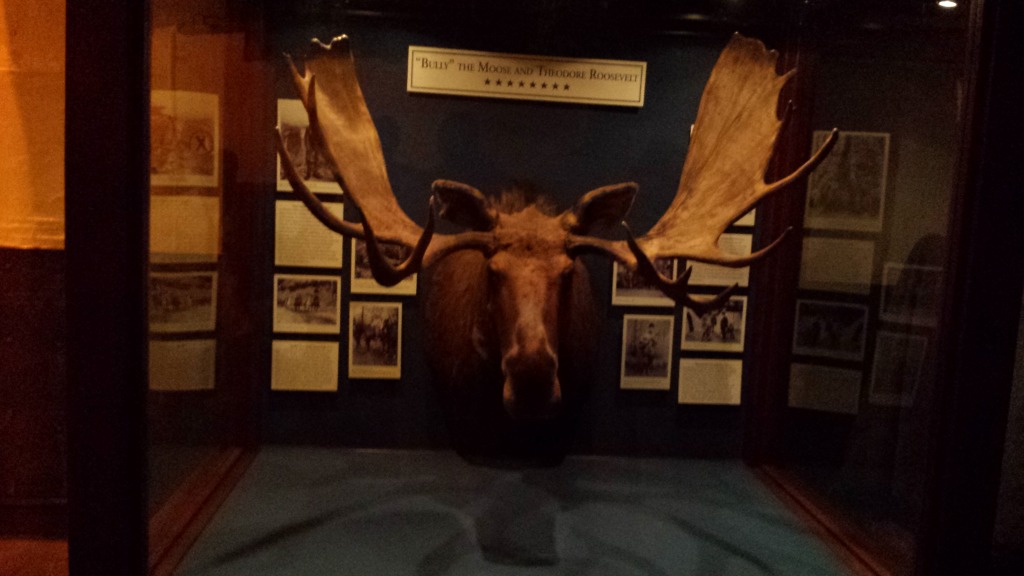 And that leads us to the big display case on the hangar deck with a moose head in it. We were told it’s a trophy moose President Roosevelt shot. But, we were told, more impressive antlers from a different moose were grafted onto it. The moose also is a symbol for the Bull Moose Party as well as being the ship’s mascot. .
The hangar deck is a fascinating place. 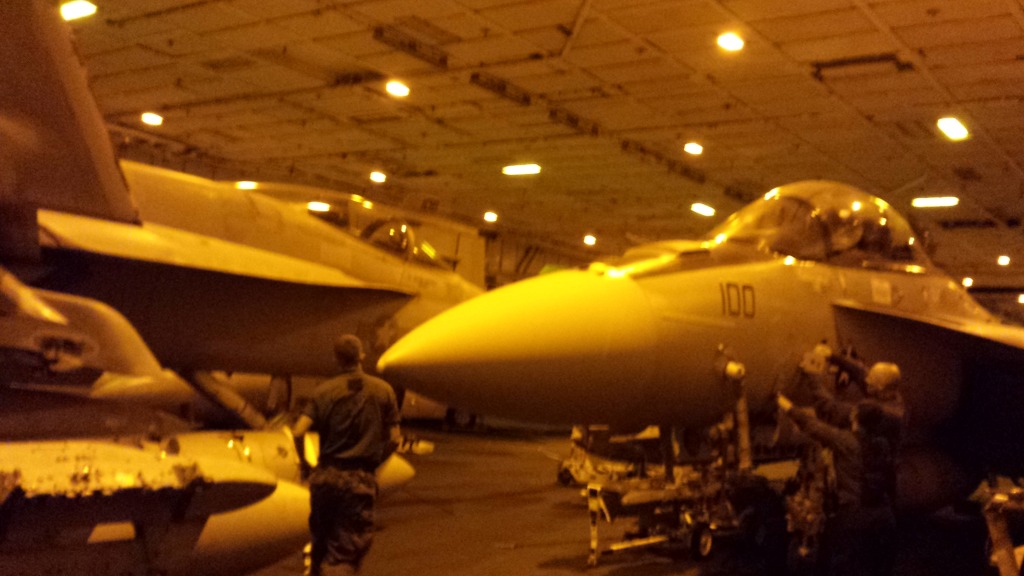 Be careful, we were told, as we walked through the dozens of planes there. Some of these wing edges are sharp. Some, in fact, were covered with bubble wrap. All of these planes were sitting quietly, waiting for the time they’d be rolled to the massive elevator and lifted to the deck to run hot and fast. But even as they sat, there was a quiet sense of power and concentrated purpose, lethal tools waiting for a job that might have to be done.
We stopped too briefly on the elevator–well away from the edge—and watched the grey Atlantic move past us.

We know it wasn’t moving past us. We know we were moving through the water. But you understand the sensation. Someone who lives along the Missouri River and understands its power could not help but be moved by the view from the elevator for that couple of minutes. And music came to mind. “The Song of the High Seas” from the legendary 1954 television documentary, “Victory at Sea.”
But we had to move on. To the engine shop. Engines for helicopters, for CODs, and–of course–for F-18s. A fighter jet has an engine problem. Easy to replace that engine. There’s one ready to go, right now. 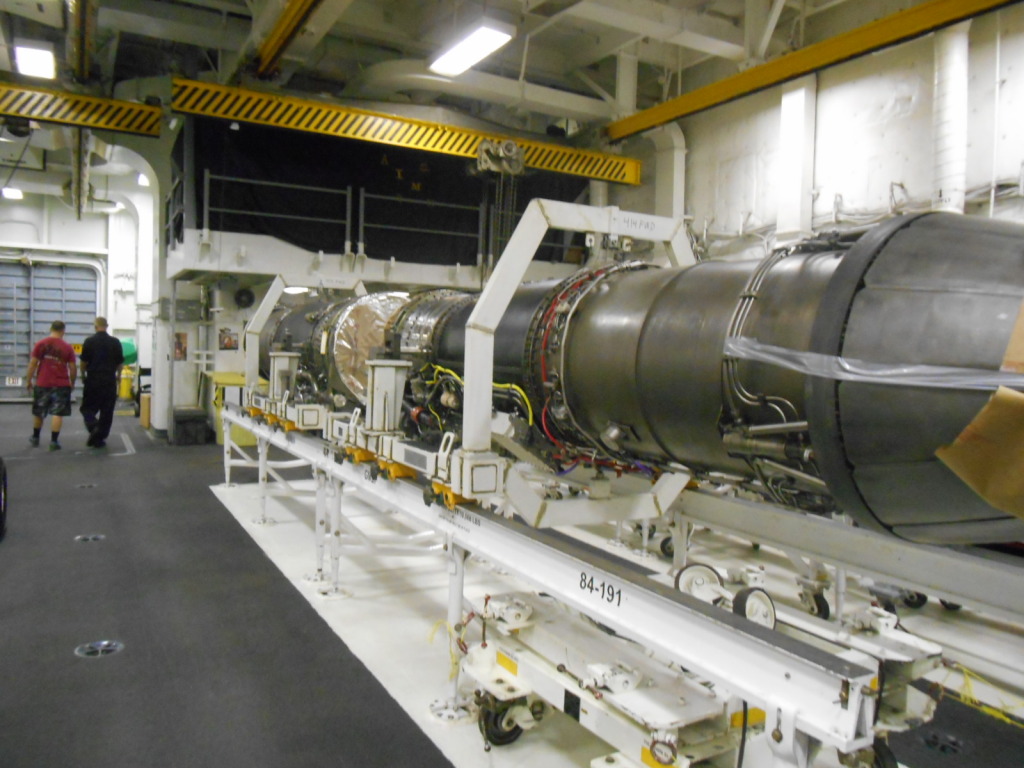 Open a door, wheel it out onto the deck, open up the belly of the F-18, undo just three bolts and drop the bad engine into a repair rack and take it to the shop for repairs while the new engine is bolted into place and within about three hours that plane is ready for launch again. This, folks, is a REAL jiffy-lube operation.
Another thing about life on the Roosevelt. Money. The crew doesn’t have any. One might imagine the problems that can arise in an enclosed community if money and cards start playing together. Crew members have debit cards. But we met one of the people who knows where the money is. And sometimes she has a lot of it. She’s a lady with a million-dollar smile. 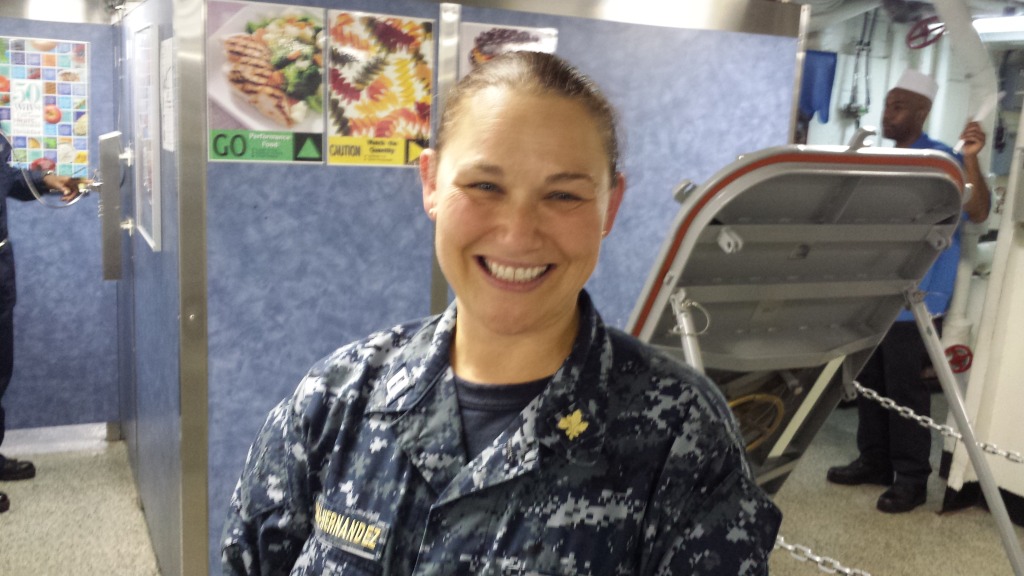 Meet Chea Hill-Hernandez, who is a Supply Officer/Disbursing Officer. She’s from Cape Girardeau. When the Roosevelt docks in a foreign port, she opens the safe, sticks a million dollars in a backpack and trots off to pay the port fees. “Trots off” is not exactly right. She does have armed escorts. We’ll do a story about her on our regular Missourinet page one of these days.
Before we wrap up, we want to tell you about one other TR item that is a point of pride on the ship. It’s on the wall of Captain Greico’s office. It’s a letter that Assistant Secretary of the Navy Theodore Roosevelt wrote to Navy Secretary John D. Long on March 25, 1898, more than five years before the Wright Brothers made their historic first flight in North Carolina. Roosevelt had just seen some pictures of “Professor Langley’s flying machine,” referring to Samuel Langley’s efforts to build a manned flying machine. He could get his models to fly but the full-scale versions failed. Perhaps Roosevelt was intrigued by the fact that Langley’s models flew after being catapulted from a boat on the Potomac River.
“It seems to me worth while [sic] for this government to try whether it will not work on a large enough scale to be of use in the event of war. For this purpose I recommend that you appoint two officers of scientific attainments and practical ability, who in conjunction with two officers appointed by the Secretary of War,. shall meet and examine into this flying machine….”

We had been living in a world unimaginably beyond anything Roosevelt, Langley, and Long could have imagined.  We had just missed witnessing tests of a technology that is the next thing in Naval Aviation.  It would have been great to watch the X-47B take off and land. 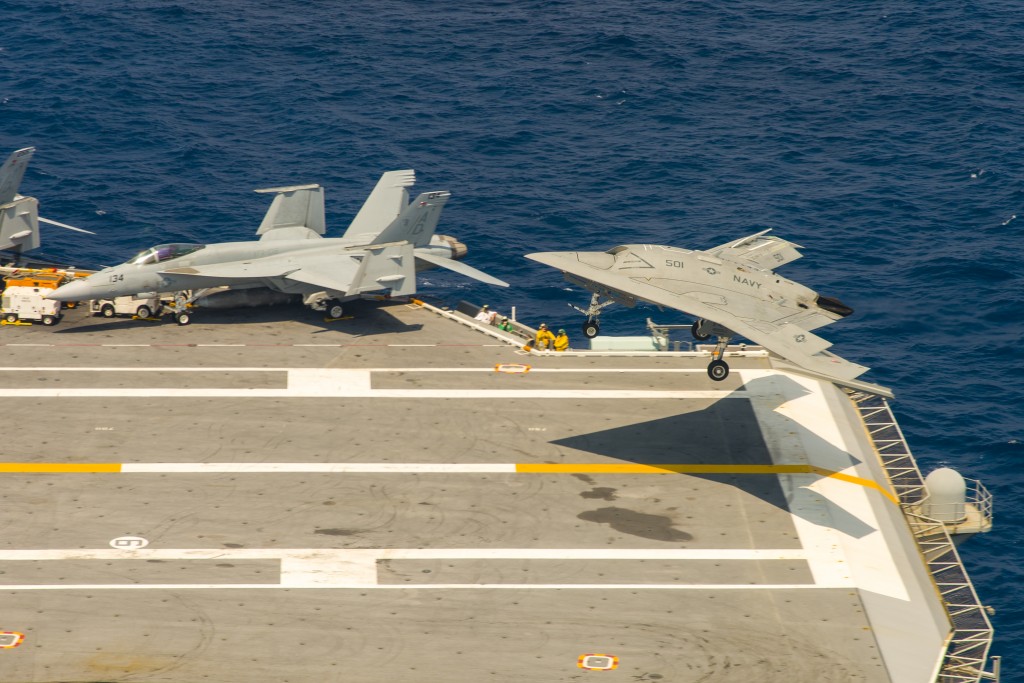 It’s a drone.  About three weeks before we dropped in on the Roosevelt the X-47B made test flights off its deck.  On August 17, An F-18 Super Hornet took off and the X-47B went right behind it.  They flew around for about ten minutes before the X-47B did a touch-and-go. After several more minutes of flying the drone landed, snagged the wire, folded its wings and was taxied to the side so the Super Hornet could land. The thing even made night launches and landings and the Roosevelt folks told us it came down within three feet of where it was supposed to land every time.
It was early afternoon when our group donned its life vests and cranials and climbed back into a flying machine that then steered its way to a catapult. Again we were seated facing the rear of the Greyhound. again we were strapped into our seats with a four-point harness. Again we knew something was about to happen.
And then BANG!! We were pitched forward, against our seat harnesses and by the time the brain registered that we were being shot off the bow of the carrier, just as the F-18s we had been watching was shot off the bow. By the time the mind absorbed what had just happened, there was the sensation of flight. It’s that fast. 0-120 knots. I turned to my seat mate, and we high-fived with smiles on our faces. What an adventure!
I flew home the next day. I wonder if any of the American Airlines passengers with me knew why I was quietly smiling when our plane lifted gently into the air from Norfolk and settled gently on the long runway at Lambert-St. Louis Airport several hours later.

(There’s a side story to this adventure that we’ll recount later about how a Missourian who’s been dead for more than half a century and a company in Sedalia saved our lives during this visit to the USS Roosevelt. But it’s time to talk about other issues for a while.)

One thought on “Arrested, then shot–IV”