A missile is headed toward our ship.

The crew of the USS Theodore Roosevelt mobilizes. Everybody has an assigned place, an assigned duty. A stopwatch is running to see how quickly they respond.

“The Big Stick,” a couple hundred miles off Norfolk in the Atlantic, is preparing for its first deployment since refueling and refurbishing, practicing all the things that happen or that can happen on and with aircraft carriers. Our party of Distinguished Visitors (that’s what they call us) continues to move through the ship in the early minutes after our arrival, passing crew members in the passageways who have quickly put on their firefighting gear and others who have put on other emergency equipment or gone to their emergency stations.

The loudspeakers speak of a missile impact, fires, flooding–even water on the deck.

There is no frantic dashing about, no shouting. There is only disciplined, orderly response, organized movement. If this were real, the people in the corridors ready to battle any condition that puts the Roosevelt in peril would be responding forcefully and in an orderly manner. Disorganization in an emergency is a recipe for cataclysm.

One of the drills run on the Roosevelt is called a “Flight Deck 50,” which simulates a fire on the flight deck with fifty casualties. That kind of thing can happen, has happened,. The USS Forrestal had the worst aircraft carrier fire since World War II in 1967. The Forrestal had more than 100 casualties.

The simulated crisis created while we were there passed. Evaluations began. We heard one voice tell one group, “It took thirteen minutes to respond. Our goal is twelve.” They’ll be better next time. They have to be. The next time could be real. And if it ever is real, 5,000 people know exactly what their responsibility is, where their battle station is, and what they must do to save the ship. Don’t call it practice. This is real. Except there is no explosion. There is no fire. No water is washing over the deck. But there’s no play-acting.

The person most concerned that the emergency responses were done promptly and properly is the Commanding Officer, Captain Daniel Grieco, a Naval Academy grad who flew 23 combat missions in Operation Desert Storm, has more than 2700 flight hours and has made (this impressed those of us who’d just made our first one) 650 arrested landings. 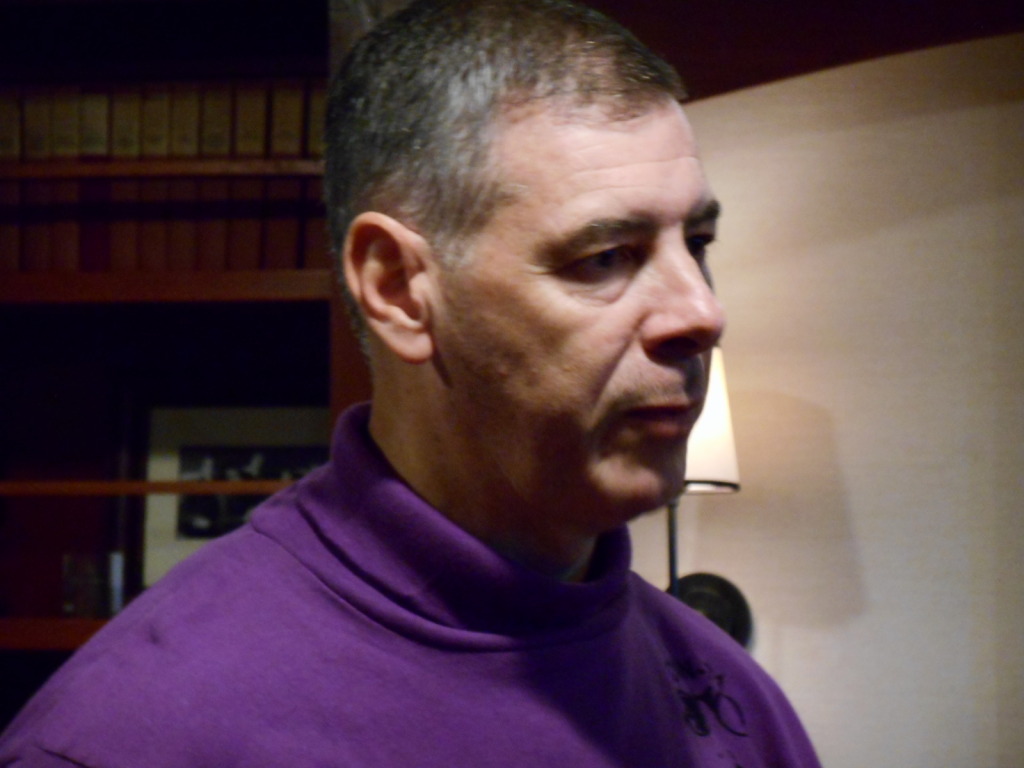 He was the first person we went to see after gettng off the COD and pulling ourselves together. But that entailed immediately getting accustomed to climbing a lot of steep metal steps. Don’t ask how many floors we went up in the island (the part of the carrier that contains the bridge and other important operational quarters) before getting to his office. It was a bunch but it set the tone for our visit. We were up and down and up and down those steep stairs throughout the visit.

The commander of an aircraft carrier has a nice office but it is without a doubt nothing compared to the office that a CEO of a company with 5,000 employees and a twenty-story building (which is how tall the island is on the carrier) would have.  It’s not a corner office with a great view. In fact, Grieco’s view is pretty restricted. 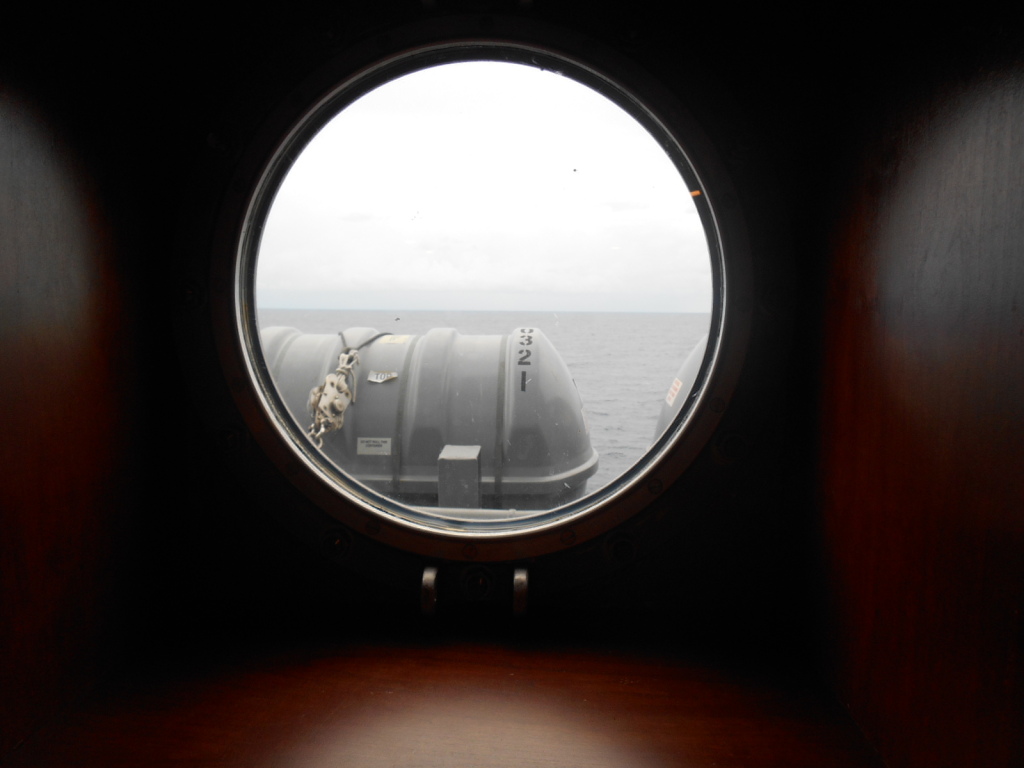 But Captain Greico is the CEO of this company, and while we were there he was leading the fine-tuning of its operation. He’s wearing a purple shirt on this day with the words “Commanding Officer” stenciled on it. Later we’ll see him in in a different color. Whatever shirt he wears, he commands all shirts of all colors.Shirt colors are the way roles are defined, especially the flight deck crew. The most glamorous color, yellow, is for the “shooters,” the plane directors, the catapult/arresting gear officers, the aircraft handling officers. These are the people who make sure landings and launches are properly done. 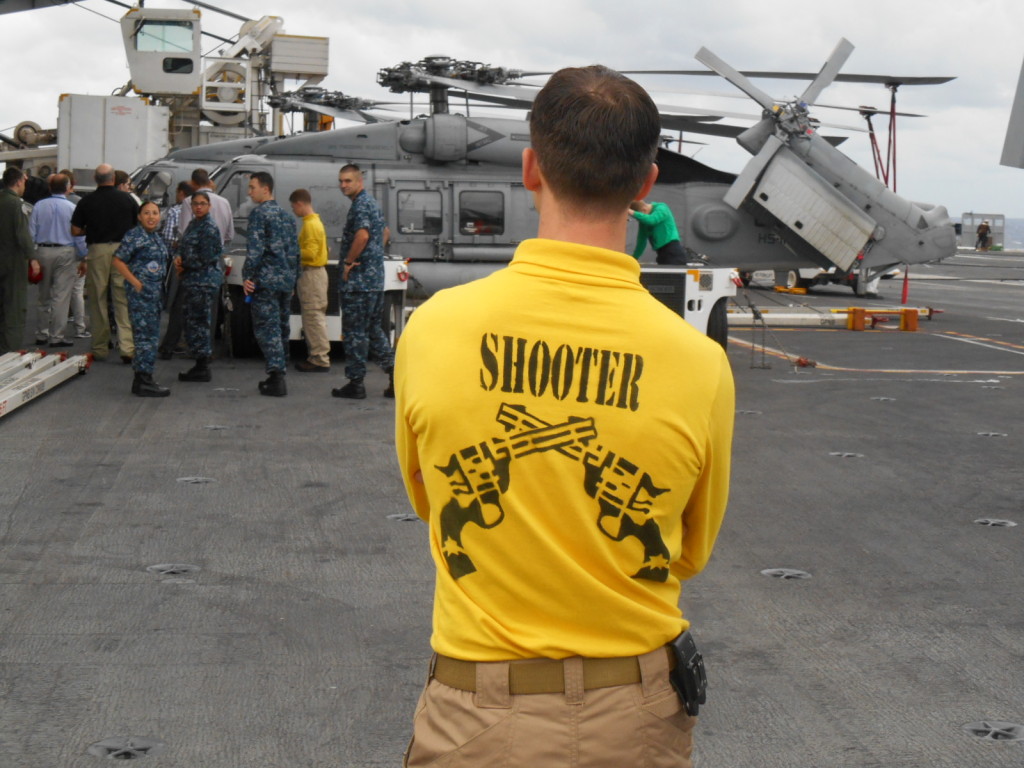 But they can’t do their jobs without people in a half-dozen other shirt colors do theirs.

If you land a plane and you need more fuel for your next flight, look for a person in a purple shirt. Unless the Commander has on his red shirt, the person you see wearing one deals with ordnance, or explosive ordnance disposal. They also are in charge of crash and salvage, but you don’t want to see them for that reason.

Some of the top Air Wing people are in brown shirts–the plane Captains and the landing Petty Officers.

That person in the green shirt might be taking pictures–that’s the photographer colors. They might also be handling cargo, doing catapult and arresting gear work, or maintenance for the air wing. They’re also hook runners, quality control people for the Air Wing, running ground support equipment, or telling helicopters where to land. 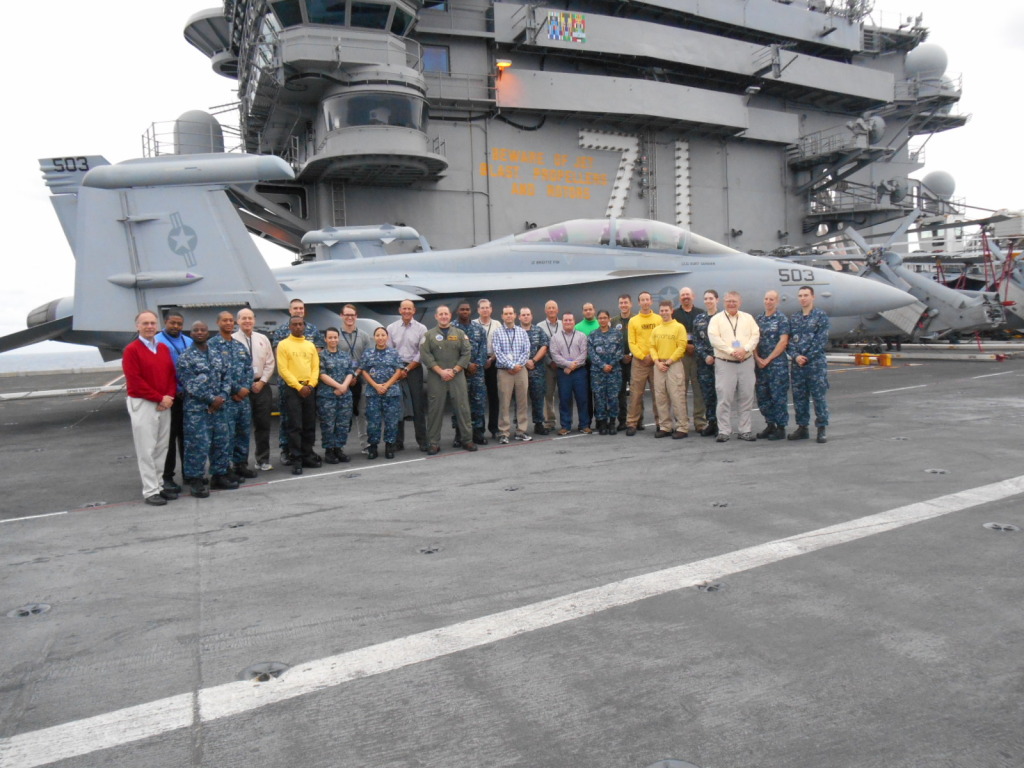 Defining roles and defining the people to fill them is critical in a climate where precision is required or the entire system is in jeopardy of possibly fatal disorganization.

We got a grasp of that precision when we climbed to the bridge and got our first look from on high at the deck. 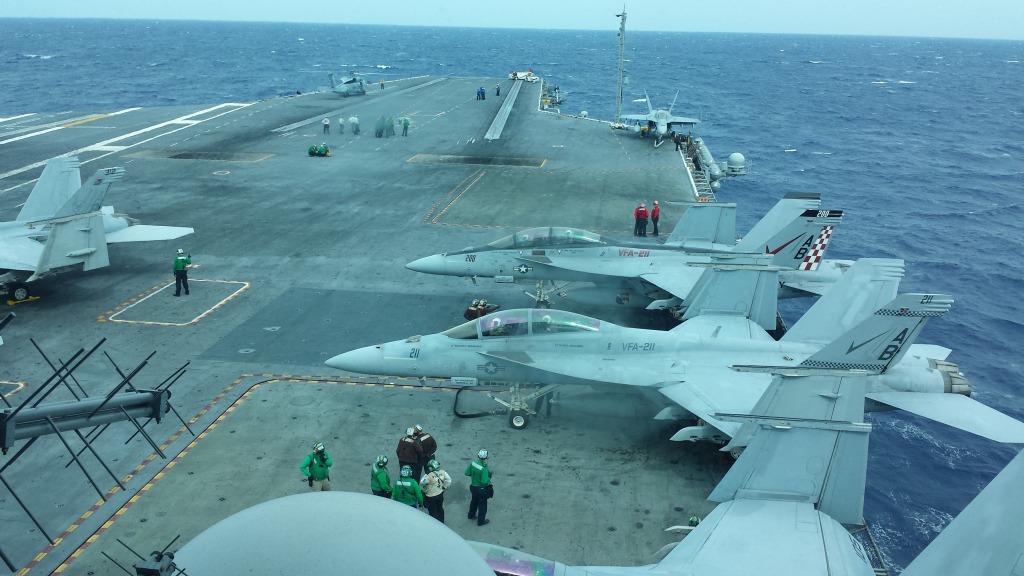 We spent several minutes watching a ballet of F-18s as they landed, moved to the side, and moved toward the catapult for a new launch, their wings often inches apart. We felt the heat flow over us from the twin engines of the F-18s as they took off, despite the jet blast deflectors. And only a few seconds after one plane was shot into the air off the bow, another one suddenly roars onto the scene and starts the cycle back to the catapult.

There was no wasted motion. No wasted time. A few seconds’ delay meant another F-18 would have to go around again. A Fighter Plane Ballet is as much concentrated, coordinated, precise movement of strength and grace as “Swan Lake,” except the stage shakes with the impact of each landing and the orchestra is full-bore jet engines.

It is a fascinating thing to watch and we were glad to be up high to do it. People like us certainly had no business lingering on the deck while this was happening. This scribe happily embraced the safety of the upper level of the island. But a little later, we were on the deck. 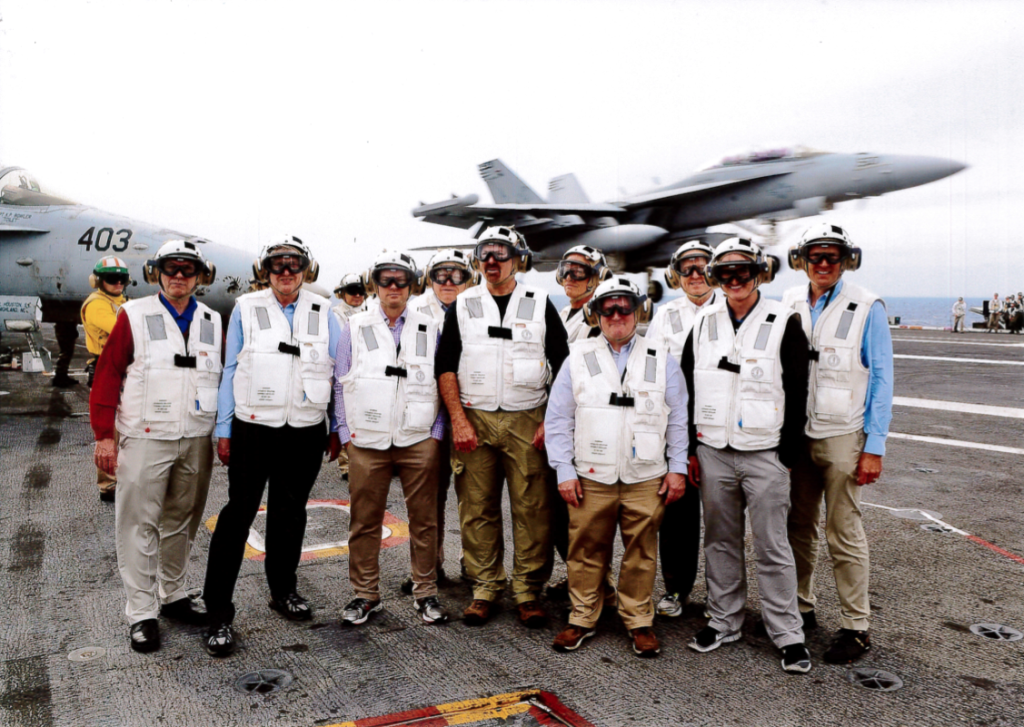 Yes, that’s an F-18 about to hook the third arresting line and yes, it was THAT close and you bet your buttons it was an incredible thrill but the double ear-protection sure was handy. However, we were more than glad to be herded to this safe space at side of the landing area. Most of us were, after all, in a dangerous alien world unlike anything we had ever before experienced.

Trying to put all of this into some kind of perspective, trying to relate it to the world we know, is a challenge. How does someone explain something so experiential to someone who hasn’t experienced it? Pictures help. Video helps.

Let’s think about this for a little bit.