The clock read something like 4:00 a.m. in Room 102 of the Super 8 Motel in Bonne Terre last Wednesday morning when this reporter finished sending stories of the Ringo execution back to the network for use in morning newscasts.  It read shortly after 8:00 a.m. when I clawed my way out of sleep to pack and leave for Jefferson City where the legislature was gathering to consider whether it could override dozens of Governor Nixon’s vetoes of things they had done in the session that ended in mid-May.

A drive made somewhat  more hazardous by sometimes heavy rains on curving roads brought me to the Capitol at 12:30, before the Senate had started the serious work of overrides.  I had predicted I would miss little if anything because I expected Senator Maria Chappelle-Nadal would be exclaiming at length about the inadequacies of Governor Nixon’s response to the recent incidents in Ferguson.  And indeed, she was.   And later, when word reached the Capitol that protestors were confronting police trying to keep them from blocking part of Interstate 70, there was a short reprise.

The veto session in the senate ground on and on, lengthened by her extensive discourse about Fergon and then lengthened more by minority Democrats talking against passage of the 72-hour waiting period for women wanting abortions, and extended to its final moments when Democrats seized the floor and let it be known no more bills would be allowed to come up for consideration because majority Republicans had moved the previous question on the abortion bill, immediately stopping the Democrat filibuster-in-development and forcing a vote on the issue.

The PQ, as it is called in legislative slang, is seldom used in the Senate.  It was last used in 2007, in fact.  It’s considered an insult by those who are gagged by its use in a chamber that regularly emphasizes equality among its members and respect for the rights of all Senators to debate an issue as they wish.

So the session ended in the Senate on an acrimonious note sometime after 1 a.m.  It was more than an hour later, with the House still in session, that this reporter headed to the newsroom to write veto session stories and record the morning newscasts.  The morning newscasts were a terrible struggle, poorly done, before I asked Sports Director Bill Pollock to wake me up after about half an hour on the full-length couch the company finally installed after 25 years in this building (and numerous all-nighters for elections, blizzards, and other events).  The remaining newscasts were better-done before the reporter finally made it home with, I am sure, divine intervention.  Somebody was steering that car and I’m not sure it was entirely the driver, operating on four and a half hours of sleep since 4:30 Tuesday morning.

One of the things I carried into the house was a framed resolution from the Missouri Senate, signed by all of its members.  At some point during that long, long 53-hour span, the Senate stopped what it was doing so Senator Mike Kehoe could bring up the resolution observing that this reporter will be retiring December 1.  It was filled with kind observations and best wishes and was adopted with a standing ovation.

I sat in my usual place at the press table enduring the reading—c’mon now, you’ve probably been in situations where people or a group lavish attention on you and it’s probably been kind of uncomfortable—and as the Senate applauded, I stood, nodded, murmured “Thank You,” and sat back down.  Senator Kehoe came over to present the framed resolution. The Senator photographer took a picture.  Kehoe has a big smile.  I appear uncertain about all of this.

Maybe it was fatigue layered on top of the discomfort about being fawned over.  But it would be easy for those who signed the resolution and applauded its presentation to think the recipient was ungrateful.

Well, I’m not.  The resolution was a nice, gracious, thing for Senator Kehoe and his colleagues to do and I appreciate it a great deal.

Most of us, I suspect, deal with compliments awkwardly at best.  Receiving a competitive award is one thing.  Having someone tell you, in effect, that what you’ve done with your life amounts to something—well, that’s a little harder because it’s boastful to say, in effect, “Heck yes it has!”

And it certainly is improper for the awardee to say, “I don’t really deserve this,” which insults the giver.  It is not up to awardees to determine their worthiness. It is instead a compliment paid by the givers and should be accepted as such.

So if you see the picture, don’t let it fool you.  The resolution was appreciated very much because, in truth, all of us want someone to assure us that we haven’t wasted our time on this earth.  Perhaps if more of us spent more time telling each other that, because most of us deserve to hear it, we’d know better how to accept a compliment as gracefully as it is given.

At the end of the week I was left pondering an honor from those who had sung my praises only about eighteen hours after I had watched the departure of one who left “unwept, unhonored , and unsung.”

And I have promised I will practice being more gracious. 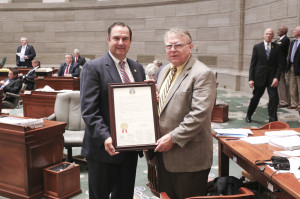 3 thoughts on “The graceful departure II”