Some from this senior reporter’s generation might think an event that happened  forty-five years ago tonight is more memorable than a more celebrated event  seven months later.  This was the night we watched Apollo 8 circle the moon and saw the black and white television images of the moon passing beneath.

Men had gone to the moon.   Seeing the moon in a way mankind had never seen it left a mark on the memories of millions that to this day eclipses the fuzzy images of Neil Armstrong coming down the lunar lander’s ladder on July 20, 1969.   For many, the memory of that Christmas Eve flyover  was even more of an emotional experience as we listened to  Frank Borman, Jim Lovell, and Bill Anders  read from the first chapter of Genesis  as their spacecraft approached the lunar sunrise.

Many who might read these entries have never known the excitement that gripped us all those years ago when some of our kind went to a place that was until then only an abstraction, a song lyric, a cartoon, and showed us what it was really like.

Sure, astronomers had looked at it through telescopes. And, sure, NASA had sent cameras to orbit and even crash into the lunar surface.  But to know that eyes like yours and mine were actually SEEING it!   They were THERE! The now-primitive video images we watched were, were……amazing.

And then as the command module came back around  and as Bill Anders was describing to us the bleak landscape below, the flight of Apollo 8 assumed classic proportions.

It was not until some time later, when the pictures shot by the astronauts were developed, that we saw the stunning images of the earth seeming to rise on the lunar horizon.  The contrast of a lifeless other world in the foreground and the beautiful clouded blue ball that is everything we have rising above it produced another emotional reaction that cemented the images of Apollo 8 as the most meaningful images of the Apollo program.
NASA has used images from Apollo 8 and computer technology to take us inside the capsule in those moments when an image of home hit the men in that capsule full in the face.   Look and listen to some of the greatest moments of the American space program.

We were ready as a nation for the giant uplift that Apollo 8 brought to our spirits at the end of 1968.   Christmas-time forty-five years ago was the conclusion of an awful, awful year.   It was a year of draft riots and civil rights riots and campus riots, a year of a deepening tragedy in Vietnam that led a President to withdraw from a re-election bid and the terrible tragedies of the King and Kennedy assassinations.  The “Prague Spring” was crushed when thousands of Soviet bloc troops took control of the country, beginning years of repression.  It was “Black Power” demonstrations at the Olympics, and George Wallace’s running mate, Curtis Lemay calling nuclear weapons “just another weapon in the arsenal” and suggests they be used efficiently.

It was an era of fear and hate, of war and tyranny, of life and death.

One person told the astronauts that Apollo 8 had saved 1968.  A massive triumph for humanity at the end of what some of us recall as the ugliest year of our lives gave Apollo 8 a special place in our memories.

Today, Missourian Michael Hopkins is in space, working to repair a cooling system problem on the International Space Station. Working in space is so routine that a couple of generations of Americans no longer find interest in the dangerous adventure it remains.  For those of us who remember Apollo 8, however, space travel and space work remain dreams we long ago sadly concluded will never be something we experience.

And that is why some of us seek out things that take us back to those times that are part of our spirits, times when we believed we were proving there truly is no limit to what mankind can accomplish.

It is one of the reasons this reporter has a print of a painting by Alan Bean, the fourth man who walked on the Moon and who later became an artist.   It is called “Homeward Bound.” 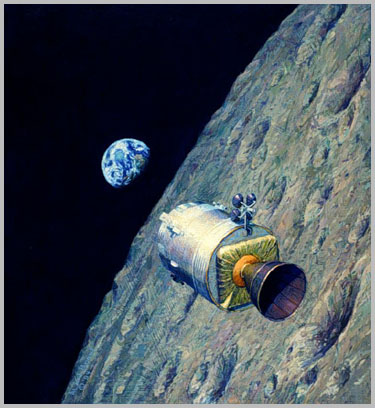 Frank Borman wrote in silver ink in the dark blue upper left corner of my print, “In the beginning, God created the Heavens and the Earth,” and signed it.  Jim Lovell added his signature later.  Bill Anders,sadly, does not sign things.  That’s okay.  There are good reasons.  But for those of us who came of age in the times when boundaries were being redefined and a spirit of unlimited opportunity was abroad in the land, the signatures of Borman and Lovell on that print are a reminder of  what was and what could be again—and an invitation to go with those who seek to lift us up at a time when self-interest and narrowness dull our vision and try to convince us our places in society are all that we will ever realize.

So it is that we recall on this Christmas Eve the enduring encouragement in the words of Frank Borman who concluded that wonderful Christmas Eve broadcast with a timeless, universal wish for all of us: “Good night, good luck, a Merry Christmas, and God bless all of you – all of you on the good Earth.”

One thought on “Earthrise”