Sometimes the very important people are not The Very Important People.

Allow this scribe to relate to you the story of the Yellow Shirts. 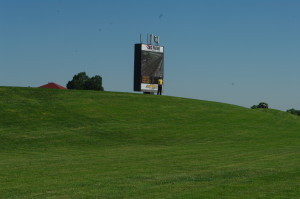 They have counterparts in other venues who wear other colored shirts. They’re called “Yellow Shirts” because they are the ubiquitous people at the Indianapolis Motor Speedway who guard gates, direct traffic, advise visitors, ask interlopers to leave restricted areas, who blow whistles to warn folks that something important wants to pass through where they are—a racing car headed to or from the track or a crew person with a cart full of tires, tools, and fuel.  They’re the folks to check credentials, sell tickets, tell us where to park, keep us moving when everybody wants to clump up to be close to the stars of the show.  How important are they?  NASCAR official Matt Humphrey advised reporters and photographers covering the races last weekend, “Don’t argue with the Yellow Shirts.  They can take away your credentials and you will have a really bad day.” 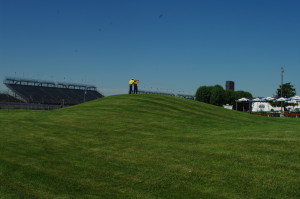 The Yellow Shirts are low-paid volunteers who work some horrendous hours on some horrendously hot days–although the 2013 Brickyard races were held on four uncharacteristically mild days.  Race days begin about 3-3:30 a.m. when they report for duty at the track. The day won’t end until the people are gone, maybe 9:30 p.m. or later.   Throughout those days they are unfailingly firm but polite.  Those we’ve talked to are retired or take time away from their regular jobs to don Speedway attire  that transform them into the Yellow Shirts.   They do it because they like people and enjoy being around crowds that like racing.  But mostly they just like people.

We talked the other day to Speedway Historian Donald Davidson, who recalled the Yellow Shirts are descendants of Indiana National Guardsmen who provided security and traffic control from the earliest times at the Speedway more than a century ago.  When Tony Hulman bought the track from famous World War I fighter pilot Eddie Rickenbacker at the end of WWII, he  started using volunteer Safety Patrol members who morphed into the Yellow Shirts many years later

This reporter has been going to the track for mumble-mumble decades and has yet to meet a Yellow Shirt who was rude.  Not even the time on a rainy May day when I was 16 and found an unguarded gate into the garage area, one of the two holy of holies at the Speedway (the other is the pit area) for most folks.  I was in there for several minutes before one of the volunteer Safety Patrol members probably figured out that a professional photographer would not be snapping pictures with a Brownie Hawkeye and came over to gently say, “Unless you have some credentials under your raincoat, I’ll have to ask you to leave.”

Now we have credentials and we can go just about anywhere. But no matter where we go, there’s a Yellow Shirt there to guide us, warn us, and protect us from stepping in front of something that could be painful or going someplace that might be dangerous. .

Last week we were met on the street to the press parking area by these two gentlemen, George French (on the left) and David McGinley. One waved us into an entrance to the lot and the other waved us to our parking space.  It was still pretty early and the remnants of the previous night’s rains still lurked overhead.  But they were having fun doing an important job for us and for the hundreds of others coming into the area that morning. 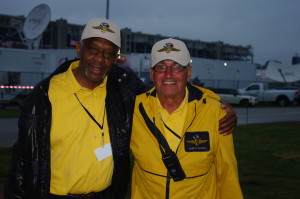 The next day we came back down the street and there was George. “What makes you think you can park here?” he asked as he reached out to shake my hand.   “Because I know people in high places,” I answered, referring to him and David.  He laughed as he pointed toward a parking spot.   George is a retired Navistar worker who’s been doing this ambassadorial work for the Speedway for five years, putting in the long days whenever the Speedway needs him for one of its big events.  David has been at it for a dozen years and preferred this to some of the other duties he’s performed because it gives him a better chance to meet people.  Better than driving the trams, he said.

“Be the Face of IMS,” said a recruitment posting for the Speedway last year. We go to see and to cover the drivers and the cars and the races.  But the famous faces we see in the garages and the pits and in the cars are not the faces of IMS.  That job belongs to the Yellow Shirts. And year after year, it’s good to see their faces.

As most readers of these entries know, we spend our life covering Missouri politics, the state senate in particular.  On the long drive back to Jefferson City from Indianapolis after the race on Sunday we started wishing we had Yellow Shirts at the Capitol during legislative sessions.  Maybe Governor Nixon would not have vetoed so many bills this year if there had been fewer white shirts telling lawmakers what to pass and what to defeat  and instead there had been some Yellow Shirts telling legislators, “Don’t go there.’  Or, “You’re not supposed to open that door.”   And maybe they would say to some, “I’m sorry. You’re not qualified to be here. I’ll have to ask you to leave.”

Perhaps it would be good for all of us to think of ourselves as Yellow Shirts on election days.

2 thoughts on “The Yellow Shirts”