We had to drive through part of Kansas to get to a Missouri National Guard airbase that probably is Missouri’s most unheralded military installation.  It was a Thursday morning, warm and sunny, when a group headed for a submarine ride in California rolled into Rosecrans Air National Guard Base across the Missouri River from St. Joseph.  It’s Missouri land, separated from continental Missouri by the fickle Missouri River that changed course during the 1951 flood.  On the tarmac was a line of Missouri Air National Guard C-130H2 Hercules cargo planes.  We were going to climb into one of them soon for a flight to Brown Field, south of San Diego, almost within spitting distance of the Mexican bvorder. 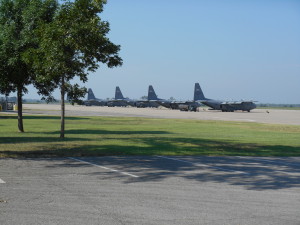 The twenty-or-so people making that trip had been gathered together through the work of several people and several organizations.  Officially it was an ESGR Boss Lift.

Employer Support of the Guard and Reserve has been around since the 1970s working to make sure that people called to service in the military, whether for a year-long deployment or just for two week training sessions, have jobs waiting for them when they return.  One of the people with us was retired Army Major Steve Brothers, who was our link to ESGR on the trip.  We interviewed Steve when we got back and you’ll hear his comments about the importance of the organization on our newscasts one of these days.

The ESGR seeks support from employers and business owners for those who serve.  Steve told me much of the organization’s work involves fostering communications between employers and their workers who have military responsibilities.   Boss Lifts take employers out to see what their employees do when they’re called to duty.

This trip was unusual for the ESGR program because it involved travel to another state and that required a lot of coordination between the ESGR committee in Missouri and its national headquaters at the Department of Defense in Washington, and Missouri Army National Guard and the Air Guard, both of which are under Adjutant General Steve Danner, as well as the Navy personnel in San Diego.

Sam, however, has a dark side.  He also has been a supplier of Seersucker suits to members of the Missouri Senate who launched the “Seersucker Wednesday” movement of which we have commented in previous entries.  That is the only blemish we know of on Sam’s otherwise sterling character.

Anyway, Sam is immersed in the Namesake City partnership between Missouri’s Capital and the submarine named for it.  When the invitation arrived for some people from the city to visit the city’s sub, he started making calls and the effort paid off in the trip.

Sam and a lot of other people made all of that possible for those of us who arrived at Rosecrans that Thursday morning for the first learning experience of the trip.

Rosecrans lost its status as a commercial airline airport in 1969, about the time Kansas City International Airport was being built.  It is now the Rosecrans Air National Guard Base, the home of the 139th Airlift Wing that is under the Air Mobility Command. 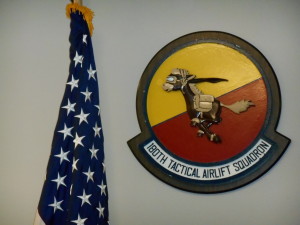 But that simple description hides the importance of what happens there.   At our briefing we were told that most of the complex air transportation operations in Afghanistan are run from Rosecrans.  Crews based at Rosecrans have made 3,500 deployments to the Middle East in the last ten years.  Seventeen nations send their crews to Rosecrans for training in cargo missions.  Seventeen!

Rosecrans is the home to 1,100 members of the Air Guard and Air Force Reserves and 350 fulltime employees who are fulltime Active Guard and Reserve or are Air Reserve Technicians.

We were told the base and its activities have a $148 million impact on northwest Missouri.

When we think of major military operations in Missouri, our attention usually is drawn to Fort Leonard Wood or Whiteman Air Force Base.  Rosecrans might be the smallest of what we might consider a big three of Missouri military facilities, but it is highly significant in what happens there, who serves there, and what it does for that part of the state economically. 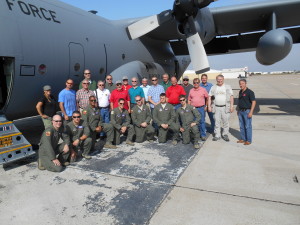 This is the crew that took us to our underwater adventure.   Actually, this is the crew that brought us back, which is the same.  But the picture was taken in San Diego, not St. Joseph.  The tall guy in the front row, third from the left, was our pilot, Major Erik Smith.  He’s had nine deployments to the Middle East.  We figured that if he could find Iraq and Afghanistan, there was no doubt he could find San Diego. 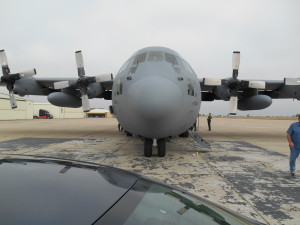 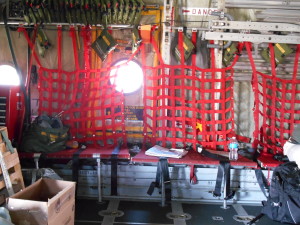 They’re not bad, really although you have to peek through the mesh to see out the window. But we have great appreciation for the military folks who sit in those seats for overses flights, especially when there’s a middle section that reduces leg-stretching room.  This is a plane designed to haul lots of stuff, lots of HEAVY stuff.  So every ouce of weight saved for seating means another ounce of stuff that can be loaded aboard.

For this flight at least, there was plenty of aisle space so we could get up and walk around. 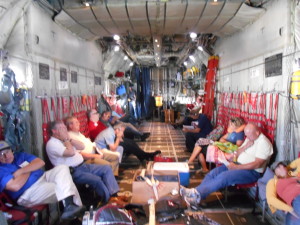 On a previous flight, however, there was a middle line of seats facing both ways.  That was kind of close quarers.

What’s not obvious in the picture, however, is that every single person is wearing ear plugs.  A few had headphones.  But there’s no soundproofing in an airplane that is intended to carry a lot of inanimate objects. 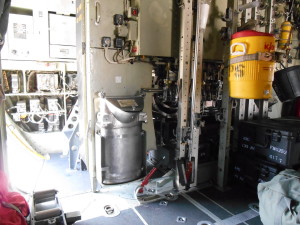 We should tell you before you expire of some kind of social shock that in flight there is a curtain that closes around this unit.   We didn’t take a picture of the ladies’ restroom.  Sorry, ladies.  .

It was a great flight.  Just four hours, St. Joseph to San Diego, faster than several of us had thought it would be in a turboprop plane.  But we were going from one military field to another and that probably meant we weren’t going to be in time-eating holding patterns before we landed.

While we were on the submarine, our National Guard crew was not out sightseeing—which is a great thing to do in San Diego.  They were working with the Navy SEALS on a deployment training mission–dropping the ramp at the rear of the plane so SEALS could drop out into the ocean. 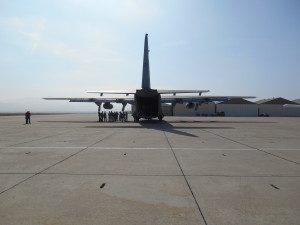 All of us came back enriched by the experiences we had, gaining appreciation not only for the people who carry the name of our Capital City at sea but also for those who serve and fly at Rosecrans, Missouri’s unheralded third major military installation.

ESGR gave all of us certificates to take back to our workplaces and post to show that we support those who serve.  We’re proud to have one of those certificates here at the Missourinet. In today’s world where the military’s role is evolving, hometown support and employer support is likely to only grow in importance.   We thank those who made those three days in the air and under the sea memorable and instructive through their commitments to serve.

One thought on “Before we were down, we were up”