Almost 200 Missourians got up Monday morning as free people for the first time since cold and dreary January.  They became free people at 6 p.m. last Friday.  They are the 34 members of the Missouri Senate and the 163 members of the Missouri House.  They didn’t have to get in their cars or board an AMTRAK train Monday morning and go to Jefferson City to spend four days under increasing pressure, living a life bizarrely different from their normal lives.

That bizarre alternative life ends 6 p.m. on a May evening each year. Abruptly.  Done.  Suddenly, this consuming existence is finished..

Legislators, legislative staff, lobbyists, reporters—all of us suddenly know that our world will be completely different on Monday.  Life might seem a little strange for the first few days when it is not scheduled according to committee meetings, caucuses, floor debate, compromise negotiations, maneuvering, strategizing, conniving—all the things that force a person to live by someone else’s clock and purposes.

We suppose some of those folks have ways to transition back to civilian life, as it were. Some kind of healing ritual helps.

In our case we get in a car as soon as we can after adjournment and the post-session self-congratulatory news conferences by the Majority and the usual low ratings given out by the Minority and head east about 400 miles.  And the next morning, we park our car in the infield of The World’s Greatest Race Course. 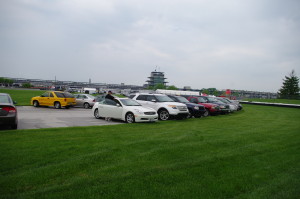 We are miles away from Jefferson City in distance and experience.  The first step onto the grass is the first step into spring after being cooped up in the Capitol through the early warm spells, the little cold jabs of dying winter, the arrival of daylight savings time (when the yearning for an end to the session increases markedly), and being drawn deeper into the legislative process as it enters its most critical days.

In the background in the photograph is what they call the pagoda at the Indianapolis Motor Speedway and to the left is the scoring tower that will tell main stretch fans what car is running in what position during the race a week away. The “pagoda” is the home of the timing and scoring operation, the place where race broadcasts originate, and other official functions go on. When the Speedway was new more than a century ago, the timing and scoring booth was in a wooden building that really looked like a pagoda.  A second, larger, structure replaced it and in 1957 a new, modern structure went up that had none of the charm or appearance of the pagoda.  The current modern pagoda-reminiscent building went up in the 1990s.

If we’ve timed our arrival correctly we are greeted as we get out of the car by the whine of tightly-wound engines driving thigh-high cars around a 2.5 miles squared oval in about 38 seconds.   The sound alone is a cleansing experience. 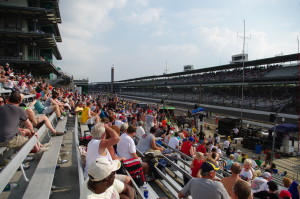 Something about sitting along the main straightaway while someone flies by on  the ground at 240 or more miles an hour and turns left without touching a brake erases a lot of the late night voices  that have been our lives for months as they struggle to find some middle ground or fight to keep an ideology from over-reaching. Sunshine, the excitement of people competing on the edge for a chance at a phrase that will stay with them for the rest of their lives (“Indianapolis 500 winner….’), doing something that requires such extraordinary precision and ability, puts four and a half months in an incredibly different world far from the mind.

And when the little guy beats all the big guys, that’s a great cap to the day. 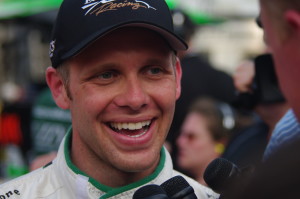 On the long drive home Saturday night, the thoughts began to filter in that all I had done was change locations to watch the same kind of drama. Maybe that was true.  But the change in place and the way the drama was played out overcame the similarities—until the mind began to find ways to entertain itself as the tar lines on I-70 to Terre Haute thumped beneath the car.

Both the race driver and the legislator must find ways to beat time whether it is being the fastest around a race track or finishing work before the adjournment deadline.  Each faces the challenge of precision whether it is making sure that a wheel is put eactly where it must be put to get through a corner in the fastest way possible or whether it is the precision of words that  clearly establish public policy.  Each faces increasing pressure to perform as the stages of the event unfold.  Each must risk something to achieve the highest result.  Each has obligations to others on their teams.  One must prove to others every two or four years that they deserve to continue. One must prove the same thing to others each week.

Journalists who cover politics or auto racing are faced with a complicated world populated by highly-competitive and complicated people.  And explaining the technical nature of today’s racing and the complicated nature of its participants is as much a challenge as explaining the nuances of writing and passing laws and the tendencies of those who create them.

Others no doubt have their ways, but it’s the Indianapolis 500 that tells me everything is okay again.

One thought on “High-speed therapy”