Several hundred people in Cape Girardeau have celebrated the 100th birthday of the Missouri State Flag, with some help from some folks in Bowling Green, Columbia and Jefferson City. The events last Friday took place on the anniversary of the day Governor Eliot Major signed the bill adopting Marie Elizabeth Watkins Oliver’s design.  Shortly after that bill signing, the state flag flew over the Capitol for the first time.

Part of the event took place in the restored 1895 home of Mrs. Oliver and her husband,  state Senator Robert B. Oliver. It’s a large house on what was once the northern border of the city.  Drs. Mary Ann and Bert Kellerman bought the house in 2002 and started restoring it three years ago.  The availability of the original architect’s blueprints have helped them in their work. 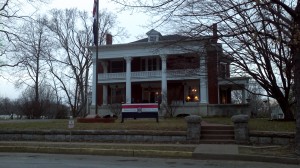 The approval of a state flag came 92 years after Missouri became a state.  State’s, by and large, did not have state flags until the Progressive era of the late 19th and early 20th centuries.  That doesn’t mean there weren’t flags in Missouri, though.  We recounted the history last Friday on our “Across our Wide Missouri” program carried by many Missourinet affiliates. It’s also elsewhere on our webpage. The first flag to fly over Missouri was the flag of the French monarchy.  After the French and Indian War, the red raguled flag of the Spanish King flew over Missouri.  France got the territory back and ran up its tri-color for a short time before Napoleon sold the Louisiana Territory to the United States in a deal that some interpret as a massive land fraud and that Thomas Jefferson felt was the most unconstitutional act of his presidency.  That brought the Stars and Stripes to the area that would become Missouri.

Our first state Governor, Alexander McNair, felt a state seal was essential and the legislature approved one. But neither he nor the General Assembly thought a specific Missouri flag was needed, too.

During the Civil War, Confederate flags were in evidence to compete with the American Flag.  The Ste Genevieve Plain-Dealer reported that a flag was flown from the St. Louis courthouse in 1861 with the state seal painted on it.  The flag supposedly belonged to the St. Louis Minutemen, a bunch of pro-Southern young men that tried to organize a semi-military group .  But they were mostly talk. Their flag was torn down at the courthouse but a new flag soon appeared at the group’s headquarters–a blue flag with a crescent, cross, and a single star.

Various Civil War battleflags were made for numerous Missouri units but none inspired a state flag.  The Civil War flags for many years hung in the armory at the old Capitol.  But when the Capitol burned and a new one was built, special cases were installed in Soldiers and Sailors Hall where the furled flags were stored until a movement was started in the 1980s to remove them and restore them.  Some of the flags had deteriorated terribly but the State Museum has done a great job with the restoration work.

Shortly after the start of the Twentieth Century, the Daughters of the American Revolution decided missouri needed a state flag.  The effort was led by Mrs. Robert Oliver (in those days–and it still happens with some organizations today–women are referred to by their husbands’ names), who was a regent in the state DAR.  The flag became something of an Oliver family project, starting in 1908.  Marie Oliver’s committee started researching a design.  She had her husband  draft a bill to make the flag official in 1909 and her nephew, State Senator Arthur L. Oliver of Caruthersville, introduced the bill. But that was the second flag proposal introduced that year.  The other proposal was the so-called Holcomb Flag designed by Dr. G. H. Holcomb.  But it was criticized because it lacked any Missouri symbolism and because it too much resembled the United States flag.  One description said it had thirteen stripes and a blue canton in the upper left corner.  Inside the blue canton was the abbreviation for Missouri, MO, and 24 stars, signifying Missouri as tthe 24th state in the union.   The senate approved the Oliver design but the House didn’t.

The legislature met every other year in those days.  So the Olivers returned in 1911 with a new bill and a paper design for the flag that let lawmakers see what their plan would look like.  But on February 5, the Capitol was hit by lightning and burned.  The paper flag design drawn by Miss Mary Kochtisky of Cape Girardeau  was one of many documents lost in the fire.  The legislature had a lot of big things on its mind after the fire and a flag bill wasn’t one of them.

But in 1913 the Oliver flag bill was back and with it was a SILK flag with Mrs. Oliver’s design.  The legislature approved the design and on March 22, 1913, Governor Major signed the bill. 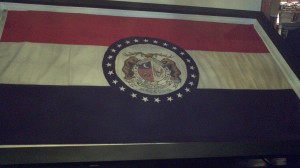 By then a temporary Capitol had been built of wood and plaster in an area east of the present building, about where the security building guards the eastern entrance.  A more substantial flag made of wool, probably made by Mrs. Oliver with Miss Kochtisky’s hand-drawn state seal on it, was run up the pole on the front of the temporary capitol and allowed to flutter in the breeze for a while.  It was taken down and the Adjutant General gave it to Congressman Champ Clark.  Clark had been the leading candidate for the Democratic nomination for President in 1912 and in a day when political conventions meant something, had lost the nomination after more than forty ballots to Woodrow Wilson. He was then the Speaker of the House, the only Missourian to hold that job.

Clark took the flag to his home, Honeyshuck, in Bowling Green.  Today the home is a historical site, open Tuesdays through Saturdays during the tourist season.

The silk flag that served as an example of what the flag would look like, still exists. It stayed in the Oliver family until it was presented to Governor Hearnes at the capitol on flag day, June 14, 1961.   On the 75th anniversary of the state flag, then-Secretary of State Roy Blunt mobilized Missouri school children to raise funds to have the delicate banner restored so it could be put on display.  Visitors to the state archives in the James C. Kirkpatrick building west of the Capitol can see that flag.

But what of the flag that flew over the temporary capitol?  The Society started trying to learn if the story was true and if the flag still existed. Contemporary newspapers that we looked at gave no clues, not even the Cape Girardeau Republican said anything about what would be a big local story in today’s editorial judgments.  But the folks at the Champ Clark House had the documentation that pretty well nailed down the flag that was there as the flag that probably flew over the Capitol.  And although nothing that we know of specifically says Mrs. Oliver made that flag, the odds seem pretty good that she did.  The state seal in the middle is hand-drawn and colored, perhaps by Miss Kochtisky.

The Champ Clark House folks loaned the flag for the ceremony. The State Historical Society has built a special display case for it.  And last Friday, the flag returned to the place where it probably was made, what is now called the Oliver Leming House in Cape Girardeau.   It will remain there for a few days before returning to Honeyshuck where it will be again put on display.

The design is a fairly simple one.  Three horizontal red, white, and blue stripes with the state coat of arms in the middle.  In the blue circle whith encircles the coat of arms are 24 stars, signifying us as the 24th state.  The crescent signifies that Missouri was the second state formed in the Louisiana Purchase. The helmet signifies the sovereignty of the state–although it is a prince’s helmet, not a king’s helmet, indicating Missouri is not a kingdom unto itself but is part of a larger kingdom.  The grizzly bears signify the courage of the people.

It took a lot of people to put the celebration together, just as it took a lot of people to make our flag the flag of Missouri.  But celebrating the creation of this part of our past is only so useful.  The Missourinet covered the celebration of that past.  And we’ll be here to cover the more important question of what kind of Missouri the future will create.