Speaker of the House Tim Jones called the Missourinet newsroom last Friday while I was in another part of the building appropriating  unhealthy Christmas goodies that were not under close watch by other company departments. He left a message suggesting we should talk about the stuff going on in the House Press Gallery that we chronicled in our original “Screwing Up The Capitol” entry. The call came shortly after we had posted a response issued through the Speaker’s office defending the construction.

Haven’t called him back yet but we appreciate the tone of his call and we look forward to a good chat after the holiday season’s comings and goings calm down.

The concerns about the construction invasion of the gallery, one of the great architectural features of the Capitol, has caught the eye of several people and organizations, none of whom are impressed by the scheme.

Not being one who wants only to complain, we have been trying to think of helpful alternatives.  And we have one. 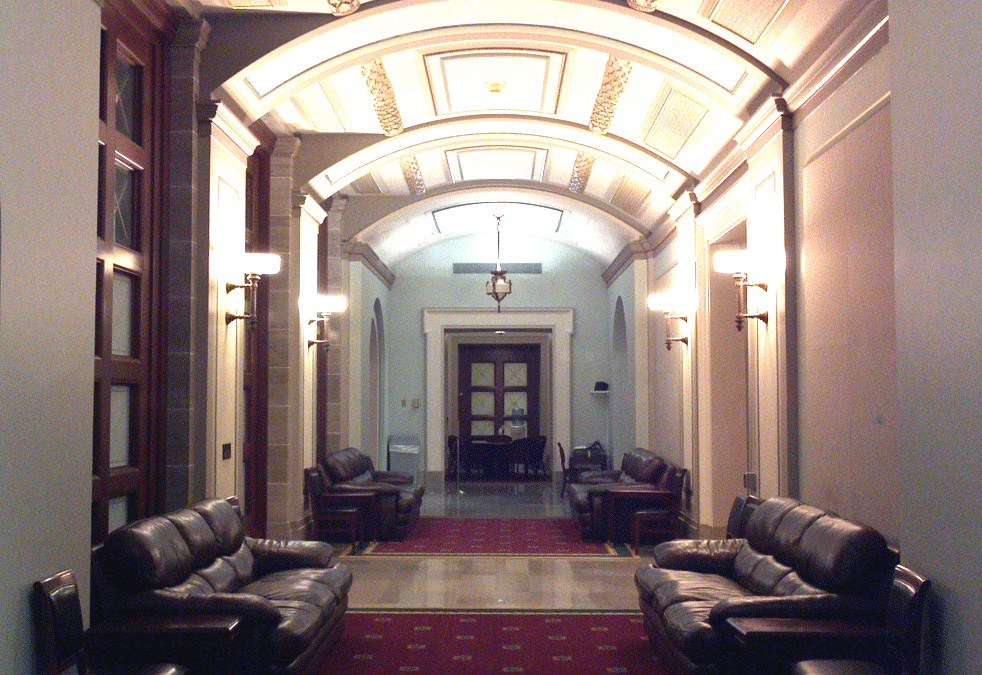 Twenty years ago or more, the House enclosed an area at the back of its chamber and created a gallery. The decision came not too long after those of us in the press gallery on the tense last night of a legislative session watched through the open back doors of the House chamber as two Representatives got into a shoving match in the rotunda.  As we recall, Representatives Tom Villa and Tony Ribaudo of St. Louis–neither of whom was a poster child for Weight Watchers at the time–were the protagonists.  Construction of the back gallery closed off that view.

The gallery is closed to the general public. Admission is only for House members or their invited guests. The gallery was created to keep lobbyists from hanging around the back door of the chamber and pestering door keepers to haul lawmakers out into the rotunda where they could be convinced to lean one way or another.  But that isolation is no longer valid. Members of the House have computers on their desks and Blackberries on their hips and with today’s texting, the lobbyists are in the chamber electronically.

If the House needs staff space, it would be better served if that rear gallery was subdivided to create staff space instead of carving up the press gallery.  There would be no conflict with those who want to preserve their press space and/or the architectural integrity of the building.  The staff would not be in an inconvenient location, one floor above the House floor.  It would be on the same floor, within a few steps of each member’s desk.  Access to and by the staff would be much more convenient.   The advantages are clear.

Do House members need the lounge at the back of the chamber?  Not really.  They have their own offices where they can close doors and relax or talk with others.  They don’t mind mingling with lobbyists in restaurants and other establishments.  Obviously the rear gallery can be put to better uses.

Furthermore, the creation of office space in an area already enclosed will not be visible to the public during the course of construction or afterward–as opposed to the ugliness that was portrayed in Phill Brooks’ pictures that were part of the first entry on this topic.

And the final result would not distract from an important architectural feature–the press gallery and Herman Schladermundt’s magnificent stained glass window.

Of course, there are some questions about the entire project.  We don’t recall any appropriations for this work. Nor have we heard how much of the House’s money will be spent on it.

And then there are the rules of the House.  What the Speaker is promoting now is a violation of his own chamber’s rules, which remain in effect until changed.  Here’s the critical rule:

Rule 116. The gallery at the front of the chamber above the Speaker’s dais shall be reserved for members of the Missouri Capitol News Association holding valid credentials issued by the Speaker and any other member of the press issued credentials by the Speaker. All other upper galleries shall be open to the public.

The Speaker, therefore, is building offices that his staff won’t be able to use because the area is restricted to the Capitol press corps under rules his members adopted and that previous House members have adopted for many years.  The “credentials issued by the Speaker” part of the rule has never been enforced although one previous speaker did issue cards.  There’s some question about the constitutionality of a Speaker, in effect, licensing the press to begin with.

There is a process for changing the rules to fit the Speaker’s plan but it can’t be used until the session begins January 9th and will take some time afterwards, including floor debate that people throughout Missouri can listen to on the internet.  At the very least, the construction in the press gallery is premature because of the House’s own rules.  But even Speakers can understand the old adage that it is better to apologize after the fact than seek permission before the act. We’ll be interested to see if any members of his own caucus want to challenge his extra-rules actions in the gallery.

Oh, one other thing.  The Speaker has cited the declining use of the press gallery as a reason for appropriating the space.  His decision comes at a time when the Capitol press corps is showing some slow growth.  A new newspaper will be covering state government in 2013.  Two years ago another new organization began covering Missouri politics.  We are seeing a diversification of media that is bringing more eyes and ears to coverage of state government.

So we offer this solution to an issue that has attracted what seems to be wider attention each day (I got a call at home Friday night with a message on behalf of a former Representative and a former First Lady, for example). Some editorial writers and commentators have noted the issue. A couple of organizations have weighed in.

So we’ve set forth a logical alternative.  Looks like there’s more to talk about when we talk.