Let’s take a few days off from the ponderous ponderings of politics and speak of Christmas.  But we cannot entirely separate ourselves from the issues of our time, not even today.  Today we are going to talk about immigration and the day Christmas became American. In the process we shall produce documentary evidence that Christmas is, indeed, American.  In fact, it is Missourian. Stay with us for a trip through some of Missouri’s Christmas history including times when Christmas around here was much different thanks to a large degree because immigrants.

Christmas was not always a day that all business stopped except at convenience stores. There was a time when the legislature met on Christmas although not if it fell on a Sunday.  But 150 years ago or so, the legislature started meeting about November 1 and quit into February.  In the days long before highways lawmakers pretty much stayed in Jefferson City once they arrived there. Sessions were timed to begin after the harvest and to quit so legislators could get home for planning season the next spring.

While Christmas was a significant day it was not a holiday in Missouri until 1895. It was a day of worship for the French, the early Anglo-Saxon settlers of what is now Missouri.  At least it was for the French who were worshipful.  Henry Marie Brackenridge, Missouri’s first author, recalled his days as a boy in Ste Genevieve sitting in church for an hour awaiting midnight mass. The service featured the largest wax candle the village could afford.

No stockings hung by the fire place with care.  French children put their shoes near the fire place on Christmas Eve so the Christ Child could stuff them with presents overnight.

German-born Gert Goebel, a Franklin County settler in the 1830s, remembered Americans held no Christmas Day church services, gave no presents, and knew nothing about the German custom of having a Christmas tree.  While it is always dangerous to claim that something is the first of anything, it could be that the first Christmas tree west of the Msisissippi River was in St. Louis in 1833. The noted plant researcher, George Engelmann and an Illinois friend, Gustave Koerner took a young sassafrass tree with some remaining leaves on it, put it on a “kind of pedestal,” and let firls decorate it with ribbons and pieces of colored paper.

Santa Claus took a little time coming to our towns.  We do find a reference in an 1843 St. Louis newspaper that the editor hoped all the children had been good and found their stockings filled with gifts from St. Nicholas.  Another editor wrote in 1852 of Santa Claus riding his flying chariot over homes, coming down the chimney and leaving gifts for good boys and girls.

The start of gift-giving as we know it now came along a decade after we became a state (1821) .  A study of early Missouri business ledgers shows no sale of Christmas presents.  But in the 1830s we do start to see some small ads for Christmas and New Years presents.

And what would Christmas be without food and lots of it?  The French baked doughnuts or other pastries and made some semi-distilled rum served to friends who dropped by on Christmas.

The Christmas turkey wasn’t that hard to find.  Schoolcraft wrote that hunters were sent out to kill wild turkeys for Christmas dinner and an hour later they were back with 14 of them.  Schoolcraft convinced the lady of the cabin to make turkey pie with corn meal crust.

What else was there in those early Missouri Christmas meals?  Venison, salted beef, cured ham, dried fruits and vegetables, calf’s foot jelly, mince pie, and pound cake.  Some homes allowed egg nog.  One Randolph County resident recalled that as soon as the yule log was lighted, his mother would stand next to a big bowl of egg nog and each member of the household, whites as well as blacks, would file past to get a glass of it which they drank as a toast to her good health.  One recipe for egg nog published in the Kansas City Journal of Commerce promised it was good for consumptives and debilitated persons.

The yule log had a special significance for slaves in some households.  It was customary that slaves did not need to work as long as the log burned. So the slaves tried to pick the greenest and hardest wood they could find so it would burn longer.

We no longer think of Christmas in terms of fireworks but as early as the 1830s there were newspaper ads for fireworks and in some places a keg of powder was sometimes used to “fire the anvils.”

Lewis and Clark were in Oregon on Christmas day, 1804.  On Christmas eve they finished building Fort Clatsop, their winter headquarters.  They had told the Indians not to come around on December 25th because it was “one of our great medicine days.”  The expedition journal noted, “The men stayed at home and amused themselves in various ways, particularly with dancing in which they take great pleasure.  The American flag was hoisted for the first time in the fort; the best provisions we had were brought out, and this, with a little brandy, enabled them to pass the day in great festivity.”

A year later the party was caught in a rainstorm, recording, “There was nothing in our situation to excite much gaiety…Our only luxuries in honor of the season, were some poor elk; so much spoiled that we eat it through mere necessity, some spoiled pounded fish, and a few roots.”

Alexander Doniphan’s First Missouri Volunteers were camped a few miles from El Paso, Texas, on the Mexican border on Christmas, 1846, having marched all the way from Fort Leavenworth during the Mexican War.  Doniphan’s card game of Three Trick Loo was interrupted by an attack by the Mexican army that turned into an overwhelming victory for Doniphan’s troops, one of whom recorded the event as a “Christmas frolic.”

The Liberty Weekly Tribune reported that during the Christmas season of 1858, “a party of negro musicians serenaded before the house of Mr. S.  The serenade, and the reluctance of the negroes to leave his premises, displeased Mr. S., whereupon the negroes were fired at, two of them severely wounded.”

The Boonville Weekly Eagle .editorialized in 1868 that Christmas would not be celebrated as it should be because the mayor had forbidden the shooting of any firearms and the burning of fire crackers.  The newspaper commented, “Christmas won’t be Christmas without the burning of powder any more than the fourth of July will be the fourth of July.  The Mayor is invading the long established rights of Young America, and we advise them to hold an indignation meeting and ‘pass the necessary resolutions.’  Why, it is one of the inalienable rights of Young America for which their forefathers fought, bled and died, on Christmas and Fourth of July, to burn their firecrackers, frighten horses, put out people’s eyes, destroy dwellings and make themselves generally obnoxious and we are surprised that the Mayor forbids them these harmless little pleasantries.”

Things were slow in the St. Louis Criminal Court during the Christmas season of 1855.

For several families in the city, the Christmas would be a mournful one.  Less than two months earlier the first Pacific Railroad train opening passenger service to the state capital had crashed through the unfinished Gasconade River bridge between Hermann and Jefferson City, killing more than thirty passengers, many of them from St.  Louis. On the western border, open conflict between slavery-supporting Missourians and abolitionists who wanted the new Territory of Kansas to come into the union as a free state had broken out, beginning the Missouri-Kansas border war.

St. Louis in 1855 was a city of immigrants.  The 1850 census had shown 43% of the population was German or Irish immigrants.  The city had grown to 77,860, a population jump of 373% since 1840.  Of that number, 22,534 residents were identified as German. Another 9,719 were Irish. They were part of massive migrations from those two countries between 1846 and 1855.  More than two million Irish citizens fled the potato famine of that time.  More than one million Germans came to this country to get away from political unrest and economic hardship.  St. Louis was one of five cities that became major settlement points for immigrant Germans. Historian James Neal Primm has written, “A majority of the Germans and nearly all of the Irish who came after 1846 reached St. Louis in a destitute condition. Their reception was mixed; Officially they were welcome, industrialists favored the addition to the labor force: and they were given considerable private assistance; but the nativist element harassed and tried to intimidate them.”

Five years later, the population of St. Louis had reached 95,000.  The Germans and the Irish didn’t like each other.  Fighting was common.  The rivalry fueled a major riot in 1854 that left ten people dead.   The next year, the state legislature passed a riot act that said police could not be held liable if officers killed or wounded any rioters.

So 1855 was a year of cultural tension and sadness as Christmas approached.

On one page is the record dated December 24 showing that 21-year old Johann Diederich Knollenberg took an oath that it was his intention to become a citizen of the United States, renouncing “all allegiance, fidelity to every Foreign Power, Prince, State, and Sovereignty whatsoever.”

On the same page is the profession dated December 26 of 31-year old Phillip Stoehr that he, too, was becoming an American citizen.

But it is the entry between these two men’s citizenship declarations that is of particular interest today.  It is the certificate dated December 25, 1855 showing that “Christmas, a Native of Bethlehem aged 1855 years, being duly sworn and upon his oath declares, that it is bona fide his intention to become a CITIZEN OF THE UNITED STATES.”  And Christmas renounced any allegiance to various potentates and states, “and particularly Herod, King of Judea, “to whom it was once Subject,” as Deputy clerk C. P. E. Johnson wrote on the form. 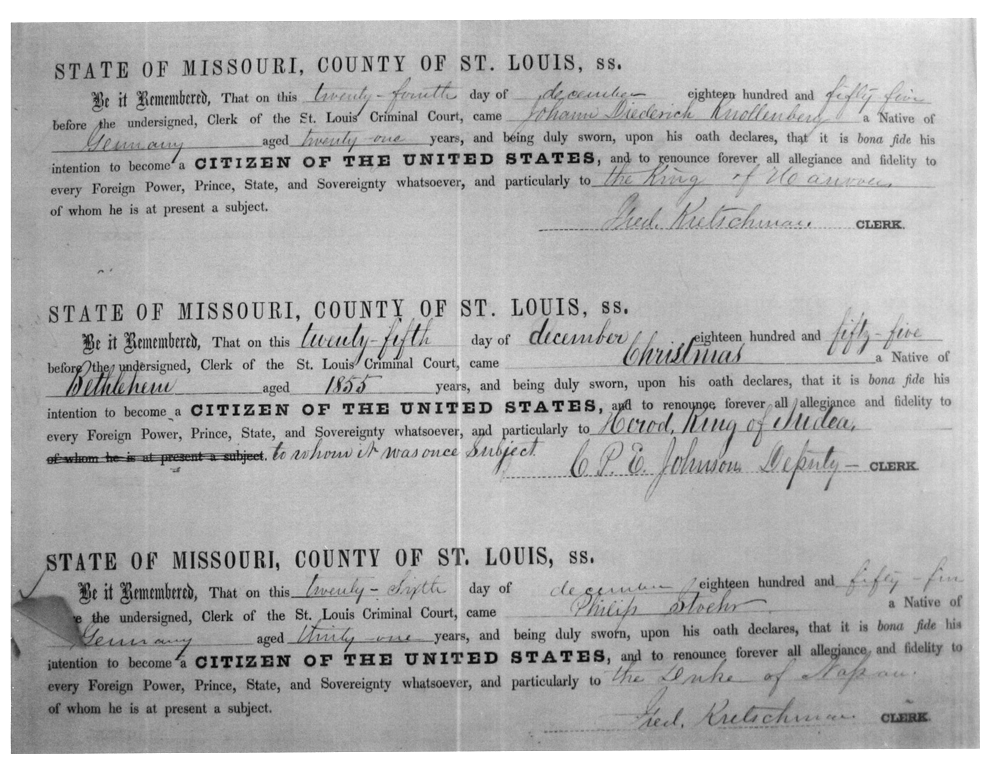 St. Louis probably needed a little of the peace and good will that Christmas represents in 1855. All of us still need that, don’t we?

The Missourinet wishes them for you this season.