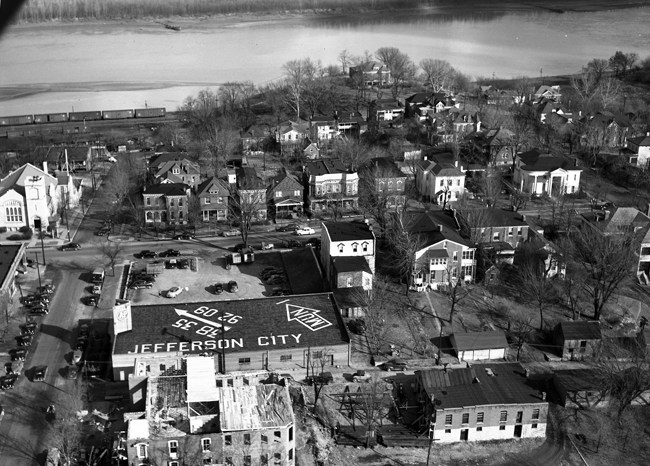 You are looking at an air marker on the roof of the A & P grocery store near the corner of Adams Street and the 400 block of East Capitol Avenue in Jefferson City.  Sometime in the late fall of 1947 or the early spring of 1948-something about the picture has a November-ish or March-ish feel to it-one of Missouri’s greatest photographers, Gerald Massie, got into an airplane and flew over Jefferson City.  We can identify the date by the building being torn down next to the A & P store.

Historians love pictures like this because there are stories all over the place in them.  But for now let’s focus on the roof of the grocery store.

The state archives has been contacted by someone wanting to know if any of these air markers have survived in Missouri.  They’re an important part of aviation history from the days before the sophisticated air traffic control system that we have today.  The skies were far less crowded and the days of jet airliners flying above 30,000 feet were years away.

Signs such as these were painted on barns, store roofs, water towers, and other structures all over the country.  The arrow with the letters “MUN” in it points to the Jefferson City Municipal Airport, just across the Missouri River at the top of the picture. The numbers are the geographical coordinates for that store: 38 degrees, 35 minutes north latitude; 92 degrees nine minutes west longitude.  The arrow between the numbers points to true north.

Massie also took some photographs of the men on the roof painting those numbers, probably the first time the numbers had been repainted in many years, perhaps the first time since the start of World War II.  In a time when even cities as far inland as Jefferson City held blackouts, when sirens went off and all lights were to be extinguished or all window shades and curtains drawn to keep light from escaping so that enemy bombers would not be able to identify targets easily, it’s unlikely that the air marker would have been repainted, pointing the way for the enemy bombers to the nearest airfield.  It’s also unlikely that the roof had been re-tarred because the oil used for roofing tar was much more important to the war effort.

Do any of these air markers still exist in Missouri?   Let us know and we’ll pass the information along to the archives.  Or better yet, get in touch with state archivist John Dougan at 573-751-3280.  The archives email is [email protected].

As a young woman, Phoebe Fairgrave was pretty fearless.  She was the first woman to cross the Rocky Mountains in a light plane.  She set several word records in aviation, including the highest altitude parachute jump by a woman.

She was born in Des Moines in 1902.  The day before she graduated from high school in Minnesota, President Woodrow Wilson was in town and a flyover was held in his honor.  Young Phoebe witnessed it and knew she had to fly.

She became a bored secretary who pestered the airport manager until he agreed to let one of his flight instructors take her up.  The story goes that the pilot went through several aerobatic maneuvers in hopes of making her throw up, thus discouraging this notion that she wanted to fly.  The plan backfired big time and the next thing anyone knew, Phoebe had bought a war surplus Curtis JN-4 biplane, the famous “Jenny” that became the staple of flyers in the early 20s.

The next thing you knew, she was wing-walking.  One report says she would dance the Charleston on the top wing while someone else handled the controls. The bold young woman contacted the Fox movie company and cut a deal that the company could film her stunts as a way to raise the money she needed to pay off the plane and pay for flying it.  Part of the deal had her doing aerial stunts for the silent  “Perils of Pauline”movie  serials.   She needed someone to pilot the Jenny while she was walking and jumping and found World War I veteran, Vernon Omlie, who went to work for her.  Together they created the Phoebe Fairgrave Flying Circus, the first such operation owned by a woman.  Janaan Sherman, the chair of the University of Memphis history department writes that one of her more spectacular stunts was the double parachute drop.  After her ‘chute popped open she arranged to cut the lines, causing her to fall free—to the horror of the crowd-until she opened her second parachute just in time.

She also perfected a stunt in which a man hanging by his knees from an airplane above the plane Vernon and Phoebe were flying would grasp Phoebe’s wrists and pull her from her plane below.

On July 10, 1921, Phoebe jumped out of the Jenny at 15,200 feet.  Her jump set a record for the highest parachute jump by a woman but the experience sickened her and she never tried something like that again.

She and Vernon got married in 1922 and moved to Memphis, Tennessee in 1925 where Vernon set up a flight operations business. Phoebe continued to her adventures, flying in several air races.

When Franklin D. Roosevelt ran for President in 1932, he hired Phoebe to fly a woman campaign speaker here and there to speak on FDR’s behalf.  When he was elected, he appointed Phoebe Fairgrave Omlie as a “special adviser for Air Intelligence to the National Advisory Committee for Aeronautics.”  Many years later, NACA became NASA.

She came up with the air marking program while working with NACA in 1935.  Her system called for letters twelve feet high on the roofs of various structures at fifteen square mile intervals.  The letters had to be big enough to be visible from 4,000 feet. Painting of these signs was one of the many job-creating efforts of the Roosevelt’s depression-era Works Progress Administration. Sherman notes she hired women pilots to administer the program in each state.  But the program was truncated during WWII when civil defense officials got nervous about them.

Her husband was killed when a passenger plane in which he was riding crashed in the fog in St. Louis while trying to land on August 5, 1936.  The tragedy forced Phoebe to leave her Washington position and return to Memphis.  Five years later, however, she became a “Senior Private Flying Specialist” for the Civil Aeronautics Authority, the forerunner of the CAB. She held that job until she got fed up with President Truman’s effort to increasingly regulate the air industry. She quit in 1952 after having organized 66 flight schools in 46 states. One of thouse flight schools was at Tuskegee Institute, the birthplace of World War Two’s Tuskegee Airmen.

She was unable to succeed in various non-aviation businesses and died in poverty and seclusion in Indianapolis in 1975.  Seven years later, the air traffic control tower at Memphis International Airport was named for Phoebe and Vernon Omlie.

So there’s the story behind those markings on the A&P grocery store in Jefferson City.  Signs like those are no longer needed, but maybe there are some badly-faded remnants of this part of our nation’s aviation history in your town.  Please let John Dougan at the state archives know about them.

We know about when this picture was taken because the building below the A&P store is being torn down to make way for the new state headquarters of the Missouri Baptist Convention.  The cornerstone for that building was laid in 1948.   The MBC moved about two decades later into the renovated Missouri Hotel, a half-block further to the “south,” out of the bottom of the picture.  It’s not really south but in Jefferson City where the winding river has made precise direction-giving an adventure.  Anything on this side of the river is considered south although you can tell from the arrow on the A&P store that it’s more like southeast.

The A&P Building emptied out about 1970 and was occupied by the Federal Highway Administration for several years and is now an annex of the city library which is in a 1970s building “south “ of the original Carnegie Library building across the street from the ex-grocery store.  The ex-Baptist Convention building now houses the Jefferson City Chamber of Commerce.

The Baptists built a buff-brick building on the vacant lot behind the grocery store as their printing plant.  Just above that vacant lot is a white stone building that dated to the Civil War.  By the time Bob Priddy arrived in Jefferson City in 1967, that building was the home of KLIK Radio and was in bad shape.  But that building is the cradle where the Missourinet, the Brownfield Network, and everything that today is Learfield Communications was born.  That building is where Derry Brownfield, Clyde Lear, and Bob Priddy worked together, where Clyde and Bob sometimes talked in the third floor newsroom about Clyde’s dream of a state news network, and where Clyde and Derry talked about Derry’s dream of a network broadcasting farm news and markets. It’s where all three got to know Jim Lipsey, who came in to manage what was then called KJFF (it’s something else now and the call letters belong to a Festus station). Jim became one of our first salesmen and affiliate relations people.  The building is long gone and KLIK is too, as its operations have been moved to Columbia, the victim of the corporate plague that has robbed communities of many of their radio voices.

Gerald Massie’s photograph has captured a lot of history and a lot of memories, more than we have related here.  Your town has stories like these and some of them stretch far beyond their local stories, as the one about air markers does.  We hope you find out if your town had an air marker and if any sign of it remains.  Let John know if it does.