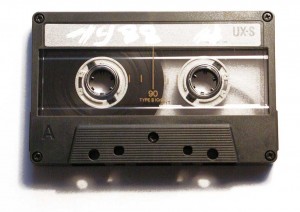 “I remember World War One,” says the voice coming from the cassette recorder, the voice of  a 75-year old woman as she sat at her dining room table in 1984.  She remembered one of her schoolmates running down the street of that small Kansas town, so excited she hadn’t even tied her shoes, yelling “The war’s over!! The war’s over!! My brother can come home!”   She would learn days later that her brother had become one of the war’s last casualties.

Near the recorder is another cassette.  When it is put into the recorder and the play button is pushed, the voice of an old man is heard.  “In Flanders fields the poppies grow between the crosses, row on row…”  Many years after that little girl dashed down the street of Scottsville, Kansas, a veteran of that war recited the war’s best known poem during the annual Armistice Day observance held at the little white church on the town’s main street.  The woman whose voice is on the first cassette recorded the reading of the poem in that ceremony decades after the war’s end.

The first voice also recounts some horrific details of the dust bowl and the Depression, of the family’s first car, of riding in a wagon with her father as he delivered ice chopped from farm ponds to people in the small town months later.

Neither of these people was famous as we think of fame.  The town where they grew up is gradually melting back into the Kansas prairie under the broad Kansas sky.  Only a couple dozen people live there now.  The church remains.  The Kansas sandstone school is a wood-choked ruin.  The sandstone lodge hall has been boarded up for years.

But the voices remain on those cassettes.

We ran a story last Friday, Pearl Harbor Day, with Lt. Gov. Peter Kinder whose role as state veterans advocate is one of several jobs the lieutenant governor has been given by statutes intended to create something for the lieutenant governor to do.  He noted in the story that only eleven Pearl Harbor survivors remain in Missouri and he hoped efforts would be made to preserve their stories and the stories of other members of the Greatest Generation.

There’s no money in the state budget for that kind of thing, he said, so volunteer efforts are crucial. At one time, there were $300,000 set aside for that work but the state budget crunch wiped out that program after hundreds of stories had been recorded.

Saving voices is critical to our understanding of the times those speakers have experienced.  They give context to the people we are today.  They explain our roots.  They will speak for decades to come of the things that worked and did not work as Missouri grew to its present situations.

We’re not bad about saving the voices of those in high office or of high rank.  But they are only the foam at the top of the glass.  The real and full flavor of society’s brew is below and it is in the voices and memories of the people like the woman at her dining room table in 1984.

Anybody can save those voices, whether of World War II veterans or veterans of the times since.  You can still buy cassette recorders and cassettes and they don’t cost very much.  And all you have to do is sit down across a table and say to the person across from you, “What’s your earliest memory?” and go from there.  Recall the stories you’ve heard and ask about them. Get some details.  Where did you live?  Where did you serve?  What work did you do?   And don’t forget to ask, “Why?” now and then to get into details that flesh out the stories.

And don’t resist when you become the subject of others with their recorders.  It’s an honor to be asked to tell your story because your life is valuable and your experiences, your perspective on the things the foam voices were doing are important in understanding what their actions meant to the people who lived with those policies and actions.

If you have a Pearl Harbor veteran or a World War II veteran (and remember there were a lot of people on the home front whose stories are valuable, too), record them now.   Not tomorrow.  Not “someday.”

And record the voices of those who have lived through the 70 years since Pearl Harbor because they, too, have seen and experienced enormous changes in our world.  The Red Scare, the Cold War, Korea, the Civil Rights struggle, the Space Race, Vietnam, the Cuban Missile Crisis, Watergate, floods, tornados, the rise of television, the Arab Oil Embargo, the ups and downs of farming, interstate highways, urban sprawl, boom and bust.  We’ve seen so much.  There are so many stories to tell—so many stories to be saved–about lives led while all of those things were going on.

And if you don’t have anybody to sit you down at that table, get a recorder for yourself and turn it on and ramble through your life.

Who would want to hear your stories?   I would.  Your children and grandchildren would.

You never heard of the old man who recited “Flanders Fields” that day long ago in Scottsville.  But to hear the voice of one of those who was in that war recite that poem has a meaning beyond definition.   Long after we are gone, our voices and the voices of generations before us will have meaning if we only realize today how valuable they will be.

That woman at the table?   In the dust bowl days of Kansas she met a young man and they fell in love.  They delayed their marriage for a few years because the Depression made their future uncertain.  But they finally did marry and they abandoned Kansas for job opportunities in Illinois. During World War II he built Douglas C-54s at an aircraft factory near Chicago that is now O’Hare Field while she cared for their son, born a few months before Pearl Harbor who grew up to record her voice in 1984 and who relates that story to you today.