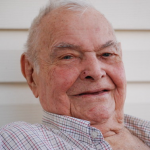 Some people just won’t taken “no” for an answer.  And our political heritage is richer because they won’t.

Former State Representative George “Boots” Weber of Eureka died the other day.  He was 87.  He was elected to the House in 1964, the only time he won a political office although the St.Louis Post-Dispatch reported in his obituary story that he’d been on the ballot more than 30 times in the last 50 years.

George was what we call a “perennial candidate.”  God bless ’em.  They add color and texture to our elections.  And more.

Boots Weber’s last run for public office was in August when he finished third in the Democratic primary for the Second Congressional District seat eventually won by Republican Ann Wagner.  He wrote in his campaign website that is still on the internet (and we hope stays there),  “You’ve undoubtedly seen my name many times in many races over the years, This is because I believe that I can have a positive impact on many of the issues that affect each and every one of us…”

He was an incurable optimist. You have to be if you’re going to go one for 30 in elections, we suppose.  But his blog on August 6, 2011, one year before primary election day, 2012 adds a dimension to his optimism: “Well, I was hoping for a lengthy remission, and so far, I’m doing well.  The doctor gave me two months and that was nine months ago. I’m so encouraged and optimistic, I opted for a two year renewal on my car license.”  That’s when he announced he would run for Congress from the Second District. He’d been diagnosed with mantle cell lymphoma in 2010, a situation he called “this new race.”

His son, David, told the Post-Dispatch that his father “believed in serving family, church, and community and never tired of presenting ideas.”   David Weber told the newspaper, “People complain about how things are, but what are they doing about it?  He tried to do something about it. He wasn’t accepted, and that’s fine.  At least he could say he gave it a shot.”

We write all of this, by the way, using Weber’s words or the words of others.  I don’t recall ever having met him although I recall seeing his name on a lot of ballots through the years.  He might have been more successful if he had gotten into the money race during his political campaigns.  But he did not acept campaign donations and spent little to run.  “It was all him, and that gave him a great sense of satisfaction,” said David.

Late in life he became a blogger for the Eureka-Wildwood Patch, calling himself “The Old Blogger,”  One reader of the Patch responding to editor Julie Brown Patton’s obituary of Weber the other day, noted “George Weber touched many people with his humor, intelligence and commitment to service.”  Another noted, “He was a true ambassador of the political process.”

God knows we need a lot of those.