No, not gags as in jokes.  Gags, as in keeping someone from talking. 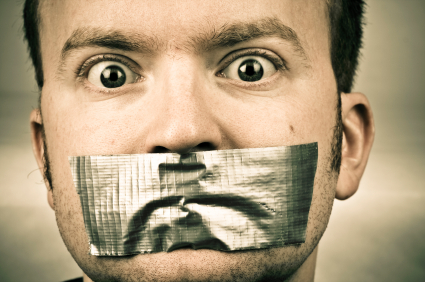 We have written from time to time in this area about state agencies that want to severely limit reporters’ access to agency people who know what they’re talking about.  But the regional office of the Federal Department of Health and Human Services pulled something yesterday that might top anything the Nixon administration communications ministry has pulled.

The federal Center for Health Policy held its annual Missouri Health Policy Summit in Columbia on Friday, October 26th.  Participants discussed “important and emerging health and policy issues facing the health care system in Missouri.”  The theme of the conference was “Keeping Missouri Healthy Without Breaking the Bank.”

Unfortunately, the Missourinet staff had other commitments and we couldn’t go to Columbia to spend the day at the summit.  So our own Jessica Machetta contacted the regional HHS office and its flack, Adele Sink, to see if we could interview regional director Jay Angoff about the conclusions that came from the summit.  Angoff was the director of the Missouri Department of Insurance 1993-1998 under the Carnahan administration.  He knows the Missourinet.  We’ve talked to him in the past in his current position.

Adele sent back a message asking when the story would air and what topics or areas Jessica was interested in talking to Jay about.  Adele said she needed to go through a “clearance process” for the interview.  That’s not something we like to hear.

Jessica wrote back that she was hoping to talk to Angoff about the topics he addressed at the summit. “Also, healthcare is a big issue in the general election coming up, so addressing some of those concerns would be of interest,” she told Adele.  And Jessica planned to run the story Monday or Tuesday depending on the flow of news otherwise.

The response came back quickly from Adele Sink: “The Regional Directors are not cleared to do any interviews before Nov. 6th.”

Fascinating.  They can speak at a summit meeting but they can’t be interviewed by the media on the telephone about what they said at the summit meeting.  Logic seems to be in short supply at DHHS.  Or is it?   “Healthcare is a big issue in the general election,” Jessica had said.  You bet it is.  And doing a story about it on election day or the day before election day in a state where opposition to the Affordable Care Act is being aggressively cultivated  and promoted by the opposition party might be politically unwise for the advocates of the ACA.

So Jay Angoff, public official and representative of the administration that has absorbed years of pummeling by the other side, can’t be trusted (apparently) to speak to the Missourinet about a public event he attended a week ago and about one of the biggest issues of this campaign year at federal and state levels. That’s hardly a vote of confidence by his employer in Jay Angoff.

Have you ever noticed how courage sometimes shrinks in the days before a tight political race is decided?  In a time when words are sometimes twisted into land mines, it becomes prudent not to allow speech.  And it seems to us that that’s all this situation is.

We hope the Communications Czar at least gives Mr. Angoff a comfortable gag for the next several days.  We hope it’s soft, clean cloth.  But it will probably be poor quality.  Gags like this are always cheap.