If you’re old enough, you might remember watching the family’s black and white 17-inch Admiral TV set while the four television networks broadcast the political conventions (NBC, CBS, ABC, and DuMont, which went out of business in 1956).  The conventions were long, long, long, events and the networks cancelled their soap operas and other programs to carry everything from the morning’s opening gavel to the last speech at God-knows-when at night.

The Missourinet’s first conventions were in 1976.  They were still major events in those days that ate up a lot of television time.   But now the networks only cover the prime-time events, the major nominations and related events.  C-SPAN does the gavel to gavel stuff today.  The other networks have more lucrative (and more interesting) programming.  It’s been several conventions ago that they decided conventions no longer merited full-time television coverage.

The Missourinet’s Mike Lear is covering the Missouri delegation and covering a much more interesting convention that we thought it was going to be when he was assigned to that beat months and months ago.  Todd Akin has seen to that.   And now Mike, who is our staff weather expert, is experiencing a hurricane.  He has done tornadoes and floods and droughts.  But this will be his first hurricane.  We sent him an email  this morning asking him to keep an eye out for t-shirt entrepreneurs selling shirts reading “I survived Issac, Mitt, and Tampa.”

The presidential primary system has taken the drama out of the main event of the convention, the nomination of a presidential candidate.  And it’s worse when you have an incumbent president going for re-election.  Jessica Machetta will be covering the Democratic National Convention in Charlotte, a city I remember from a 1999 news directors convention as the most boring city where we’d ever had a convention. Jessica won’t have a Missouri delegation and a national convention with the shadow of Todd Akin disrupting the focus.  And she probably won’t have a hurricane to spice things up. 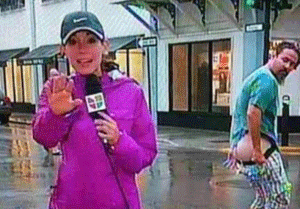 But Jessica used to be a reporter in the Florida Keys.  She says the people in the Keys have Hurricane parties and laugh at the windblown TV weather types who are trying to convince their viewers that there are no parties going on.  She showed me a picture today of a Key Wester mooning a TV reporter in her raincoat telling people that, yep, the wind sure is blowing hard today. (We should also make sure you understand that neither of the characters in the picture is Mike Lear.)

Don’t be surprised, however, if the image and words of Todd Akin are a part of the convention in Charlotte.

So now the question becomes whether conventions need to be four days long.

They’re important events to rally the faithful, to launch a national campaign strategy, and to nominate a vice-presidential candidate to run with the presidential candidate who has been determined in the long and arduous primary season.  But two hurricanes have raised the issue of whether four days is necessary, especially since conventions have become little more than a political infomercial aired for a couple of hours in prime time and competing with Ronald Reagan flicks on the movie channels, scruffy swamp guys shooting gators, the latest activities of the Kardashian family, whether somebody wanting to pawn a family heirloom is going to get $50,000 or $50, and high school football, field hockey, a pool game shootout, or a baseball game on ESPN.

We still send people to conventions, though, because they still have meaning and the meaning is often found within the delegations more than it is found on the big stage at the front of the convention hall.  We want to see how and what the Missouri delegation does and cover how the Missouri delegation’s marching orders are shaped. What our reporters learn at these conventions has value beyond those four days because those lessons help our reporters better understand and cover the political events back home.