Monday was one of those days that makes reporting the news an interesting life.  The reporter walks into the newsroom and spends the day being swept along by the flow of the news.  Sometimes it’s a tsunami of news and the reporter is challenged to stay on top of it. 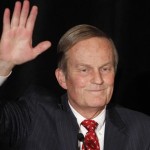 Akin Day was one of those days.  It probably wasn’t a tsunami but it sure was more than a few whitecaps on the political pond.  It was a day that began by reporting Senate candidate Todd Akin had shot himself in the foot during an interview with Charles Jaco on KTVI, St. Louis.  Throughout the day we reported on those who were trying to make a wound to the foot into a mortal wound while Akin was trying to find he right verbal bandage to stop the bleeding.

National Republicans grew increasingly harsh as the day unfolded. At first they strongly distanced themselves from Akin’s remarks.  But as the hours ticked by, they started sending increasingly un-subtle messages that Akin was toast and should get out of the way before the controversy about his remarks became a spreading stain on the whole national party, especially because Akin and Mitt Romney’s anointed Veep-to-be had co-sponsored several pieces of legislation including one that dealt with the definition of rape.

Akin was laying pretty low.  He went on the Mike Huckabee radio show and issued a rambling apology that tried to redirect the discussion to the national economy.  He ducked an appearance on KMOX in his home town of St. Louis and later was a no-show on CNN.

Who could blame him for seeking only friendly outlets at a time like that?

As the day went on we noticed there was one source we were NOT hearing from:  The Missouri Republican Party.  A day without an anti-McCaskill or anti-Nixon message from the party’s PR flack, Jonathan Prouty, is rare.  But there wasn’t a Prouty peep.

Well, it’s hard to bash Senator McCaskill on a day when she is standing up for Todd Akin and saying he should stay in the race and the national Republican people should butt out because Akin is the person Republicans in Missouri picked as their candidate.  Of course, that election result was what McCaskill was hoping for and she likely loves all of the noise that the national party and the well-financed super PACS saying they will turn off the money spigot for Akin if he stays in the race.  Jonathan and the party are in an awkward spot.

We didn’t hear from the Democrats either yesterday. They’re in an awkward spot, too.  How can the party tear into Akin when the party’s own candidate is defending him?

It’s a good time to sit back and see where the dust settles before getting back to partisan business as usual.

As we rode the wave of this story yesterday, we tuned in to the Huckabee show and were interested in the things Missouri callers were saying about Akin.  Every single one of them said he should stay in the race because he was their guy—a family values, pro-life person whose  comment didn’t matter to them. Listening to those callers added an important dimension to the story and illustrates the pickle the Republican party is in.  The fervent supporters of Todd Akin see more in him than somebody who made a comment that the national party chairman called “dumb.”  National leaders might be wetting their pants about Akin’s Sunday interview, but a lot of people in Missouri think his career record outweighs comments that a lot of outsiders and non-Akin loyalists think are offensive.  And the Missouri people who called Huckabee didn’t give a rip what Mitt Romney and the national party chairman thought.  To them, this is a Missouri issue and to them, Todd Akin is still their guy.

A lot of things are in play in this kind of situation and reporters sometimes have to decide what is of most immediate interest and what can be covered in a longer term.  So on Akin Monday, we tried to report on the political forest fires that were breaking out.

Whether Akin stays or goes, the story will be more than Todd Akin and will extend well beyond Monday.  If he stays, how will he finance his campaign and can the big-money people sustain their threats to withhold money if the polls show he still has fervent supporters working for him in October?  Can the party afford to give up on a race many thought the party had a chance to win?   If Akin steps aside, who takes his place?  Which of the primary election losers would want to get into a race after being rejected by their fellow Republicans on August 7th?  After all, two-thirds of the primary voters said they didn’t want either John Brunner or Sarah Steelman.  And would someone else want to step in at this relatively late date and get a major campaign organized?

So there are a lot of stories yet to be told, yet to be uncovered, yet to play out.  Nothing is ever solid about Missouri politics.  They’re always fluid.  Like a wave.  And reporters have the joy of riding that wave every day.

Whether Akin stays or goes, there will still be that wave.