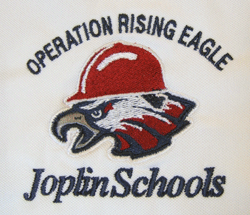 It’s the first day of school in Joplin. It’s not the emotional experience it was a year ago when students returned to class for the first time after the tornado. The students have had a year to become accustomed to new surroundings and new circumstances.

I wish I could be a high school student again. In Joplin.

I was at the Joplin High School about three months ago along with several other folks who’d gathered in Joplin for an event sponsored by Ingram’s Magazine, a Kansas City-published business magazine that is the biggest publication of its kind in Missouri. We were there on the first anniversary of the tornado and watched several of the activities that commemorated the storm and remembered the 161 lives it took.

We started our day at the high school. I want to tell you a little about the place.

Within days after the tornado left several Joplin schools in ruins and a city overcome with grief, school superintendent C. J. Huff announced classes would start as scheduled in mid-August. It was an incredibly bold goal in a climate where bodies were still being recovered from the wreckage and the school district was not even sure how many of its students would return to Joplin. But Huff and other school officials knew the importance of a school system as one of the anchors of a community. And I recall hearing him and other educators talking on our Joplin affiliate, KZRG, about the importance of re-establishing a point of stability for hundreds of children whose lives had been reduced to chaos.

They set about finding temporary quarters and one of the places they located was an empty big box store at the North Park Mall. Shopko had moved out a decade earlier when it pulled out of Missouri and the space was waiting for someone to occupy it. The Joplin School district turned the place into a high school for 11th and 12th graders in 55 days. Think of that. In less than two months the school district went from devastation to a 21st century high school. And it set up facilities for students whose other schools had been destroyed in the storm. The district had a lot of help. But the effort to give the city back its schools was part of creating the spirit of resurgence that is so much of the story of Joplin’s recovery. They call the effort “Operation Rising Eagle.” The Eagle is the JHS mascot.
It’s going to take a lot more money than school insurance policies provided after the tornado to rebuild the school facilities the tornado took away. Joplin citizens were not afraid to make that investment. Although many continued to deal with the burdens of destruction and recovery, they supported a $62 million bond issue for their children’s educational future. 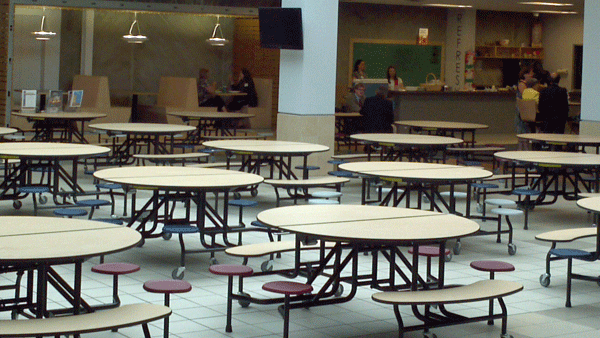 Our group met in the school cafeteria of the former Shopko store. Several students, their first post-tornado year just finished, were there to be our guides when we toured the building. We discovered something about them as they showed us around. One of our group asked the three who were with us to tell us about their tornado experiences. They really didn’t want to because, as one of them put it, “We all lost something in the tornado.” And as they talked we realized that there was within them a sense of community that was greater than the individual experiences. They could have talked a lot about that day and they eventually opened up a little bit but our feeling was that the shared experience bound them together and helped them focus on the future rather than dwell on the tragedy of the past.

So we set off from the cafeteria into the rest of the school. 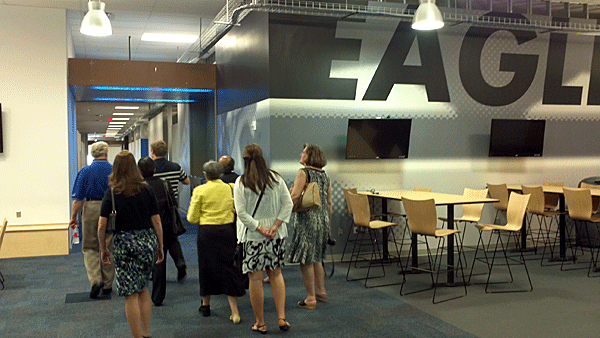 Our student guides (you’ll see them later) took is into some classrooms, all of which are equipped with the most modern mechanical teaching tools—the days of the teacher writing things in yellow chalk on greenboards or white chalk on blackboards are gone with the wind in Joplin. Computers reign. In fact, said our guides, there are no textbooks. Each student is given a laptop with textbooks on them. 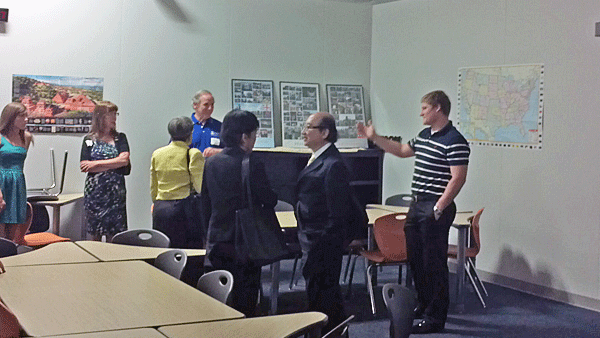 You’ll notice the wall doesn’t go all the way to the ceiling in this classroom. Our guides told us that wasn’t usually a problem unless your class happened to be meeting at the same time the school choir was rehearsing in the room next door.

The school has a lot of open space where students can congregate. In our day (and you don’t have to be all that old to say this) our time between classes was spent going down dark or dimly-lighted halls, usually passing between row after row of lockers interrupted only by the doors to the classrooms. Not at Joplin High. The place is open, inviting, encouraging. All over the place are charging stations for students’ computers and places where students can download assignments and information. 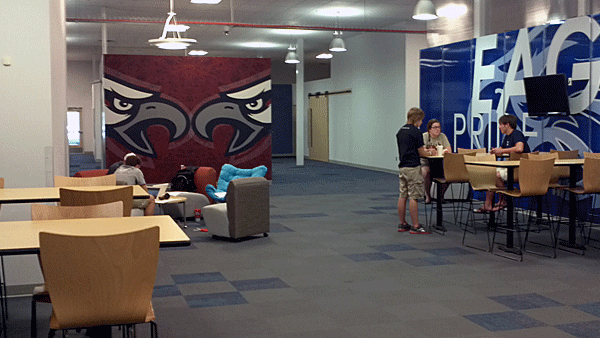 In several of these gathering areas are special rooms set aside such as the one below where study groups can go in and close the door to work together on projects. 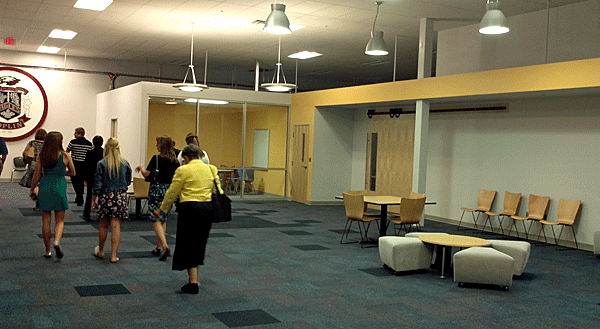 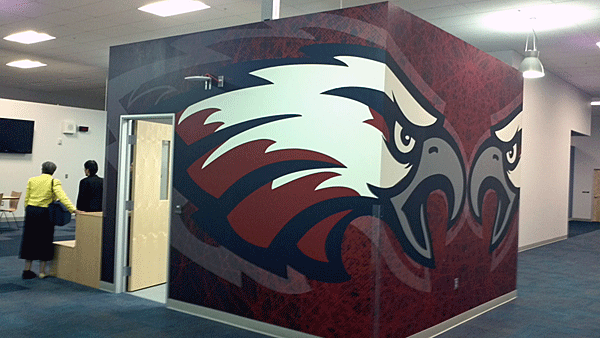 Here’s a nice feature. Here also are the three students who showed us around that day. This is one of the walls that separates the hallway from a classroom. 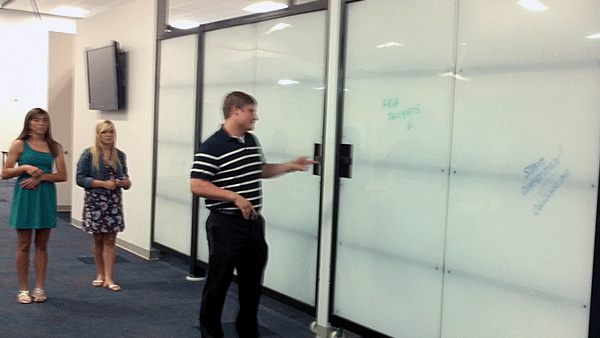 That’s a whiteboard dry-erase wall, a wall where school spirit messages can be written with markers telling students about pep rallies, games, assemblies, and other events.
Out back is a series of concrete buildings that are kind of like storage buildings some of us use to store things of “sedimental” value that we don’t have room for in the house anymore but can’t part with. But these are not storage lockers. They’re tornado shelters. 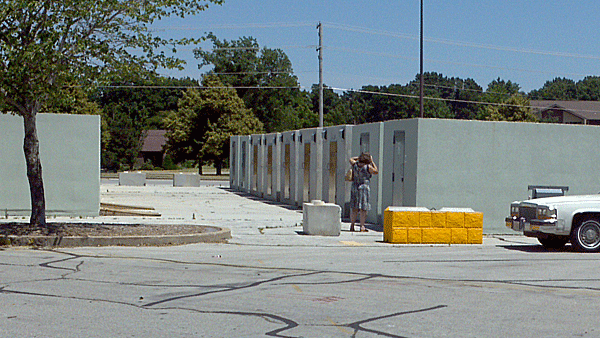 Each student is given a number and when the alarm is sounded, each student goes to the building with that number. Other schools have fire alarm drills. Joplin has tornado drills. And well it should. In May, 2011, the last graduating class members of the old Joplin High School had been getting their diplomas as the skies to the west grew darker. They started home as rain began to fall. Some of the people at that ceremony took refuge inside a walk-in cooler at a convenience store as the tornado began to grind its way through Joplin. One of our student guides was one of them. If the storm had hit minutes earlier, or days earlier—-well, you understand why there are tornado shelters at this school today.

That’s just a little bit about the place senior high school students in Joplin are going for their 2012-2013 school year, starting today. It’s only a temporary place. If things go well, the new high school should be ready in two or three years. And it should REALLY be the model of what a 21st century high school can be.

If this is what can be created in 55 days in the wake of the deadliest tornado in Missouri history, think of what the high school will be like that will have several years of planning and designing behind it.

We wish we could go to high school in Joplin. We wish all of our communities wanted things this good for their children.