Our newest reporter, Mary Farucci, is a city girl who grew up in White Plains, NY and who went to college in Boston. We sent her to the state fair as part of her Missouri Cultural Appreciation Tour so she could get up close to cows and pigs and chickens and corn dogs and people in overalls. From time to time we will have her share her voyage of discovery to her new world.

Going Country!… My transition from city girl to country girl.
By Mary Farucci 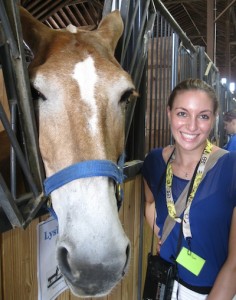 So, in my progress of becoming “countrified,” this city girl still has A LOT to learn. However, a few days ago I got to attend- and cover my first state fair, The Missouri State Fair to be exact. I took the hour long drive to Sedalia with fellow Missourinet reporter Mike Lear and what I came to find was nothing like I had experienced at home. In New York, we have carnivals and fairs, and plenty of them. Back home, I live about ten minutes away from our official Westchester County amusement park called Playland in Rye, NY. If you’re feeling really ambitious, either a car ride or a few train rides (subways included) will take you all the way to the end of Brooklyn and there you have Coney Island. Both places are lots of fun, and both places are equally close to large bodies of water along a boardwalk and both just equally rich in history just like the fair in Missouri is I was introduced to FFA (Future Farmers of America) for the first time as well.

I was astonished at how mature these teenagers, some even young children, were for their age. They were taking care of their horses, cattle, pigs, and goats, feeding them, grooming them, and just all around maintaining their animals to be judged in the fair based on appearance. One young lady explained to me how she got involved with the FFA through school, like as if it was a club. It is a club, essentially. Just not the kind of club I’m used to having at my high school when I was a student. Clubs where I’m from included things like Advocates for the Earth, Songwriters Club, Italian Club, French Club…you get the idea. These adolescents get involved with raising animals and using them for show to be judged on. It was really quite remarkable. I’m not sure if I’d have the skill or patience to deal with what they’re doing day in and day out… then again, I also never grew up on a farm, or remotely lived near one. These kinds of things are just unheard of where I’m from.

The highlight of my experience at the state fair, and this may sound kind of silly, but, trying my first corndog. I’ve never had a corndog before attending the fair. Many people I’ve told this to I don’t think really believed me, but it’s true! And it was delicious! It’s definitely on my agenda to have another one the next time I attend another fair. At the same time, I felt a little out of place in terms of my attire. I saw people walking around in cowboy hats, cowboy boots… I even think I saw a man wearing a pair of boots with spurs on the back of them. I don’t own a pair of cowboy boots, but I noticed a lot of women around my age sporting the boots with a pair of jean shorts. Not sure if I could pull that off, but perhaps it’d be worth a try.

When I was attending college in Boston, I only saw one person dressed as a cowboy every day. He was a student where I attended and wore nothing but a jean shirt, blue jeans, cowboy hat, and, you guessed it, cowboy boots. I remember all the weird stares he used to get from people walking down the street… I felt that’s what was happening to me because I wasn’t wearing cowboy boots like everyone else was. Perhaps it’s time I go out and get a pair.

One thought on “City girl goes to the Fair”