The state supreme court’s decision that an American citizen’s right to have a jury of peers determine the severity of damages caused through medical malpractice has touched off severe concerns among those who think a uniform maximum amount should be set for damages. The backers of damage caps call their effort “tort reform.” One of the arguments made in 2005 to justify the damage limits was that the trial lawyers were getting such terrible judgments against doctors and hospitals that something had to be done to protect our medical practitioners and their facilities from unjust financial penalties for mistakes.
One of the arguments was that unjust high malpractice awards were driving doctors out of the state and were forcing hospitals to consider limiting access to some procedures because the cost of malpractice insurance was going through the roof.

We watched that debate and anticipate a reprise of it in the 2013 legislative session.
The people we elect this year to new offices or to additional terms will join 17 senators who were not up for election this year in shaping the new policy.

The court’s decision points up the difficulty they will have if they try to balance protections of the medical profession from ridiculous damage awards with protections of those who are hurt by incompetence or inadvertence in medical treatments.

We thought it might be worthwhile to look at some pre-2005 numbers and some post-2005 numbers to see if the claims in 2005 were justified that doctors would flee the state if the bill was not passed.. We contacted the state board of healing arts, the agency that licenses doctors, to find out how many licensed doctors were working in Missouri from 2002 until this year. We thought that might provide some information about whether the tort reform bill of 2005 actually made a difference.

Here are the numbers the board sent us: 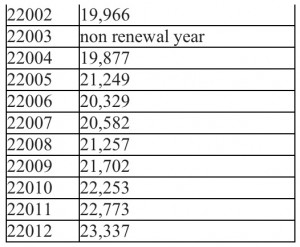 We always start doing math for these entries with some trepidation. But let us plunge ahead nonetheless.

As long as we’re fiddling with these numbers, the total additions of licensed doctors since the law was passed in 2005 is 1,524, an average of 218 a year.

There are a lot of ways to read those statistics and we’re sure various interests will read them in various ways when the issue comes before the legislature. We’ll be watching to see how the court’s decision that raises the issue of citizen justice changes the discussion of doctor protection.