Well, PROBABLY you’ve never heard of him. But with Olympic fever at large in the world and the spotlight shining brightly on swimmer Michael Phelps, we thought we’d call your attention to a man whose record Phelps hopes to break. Part of his record was established when the Olympics were held here in Missouri.

There are those who think that he is one of the greatest Olympic athletes of all time. We’d come across his name when researching an episode of “Across Our Wide Missouri” several years ago and we were reminded of his prowess last weekend when we picked up a copy of the Indianapolis Star while we were waiting at the Speedway for the start of the Brickyard 400 and saw Bob Kravitz’s article.

It might seem that the distances of Ray Ewry’s jumps are pitifully short compared to the records established by the world-class athletes of the late 20th and early 21st century. And indeed they are until you consider this amazing fact: today’s jumpers RUN before they jump. Ray Ewry did all his jumping from a standing start. 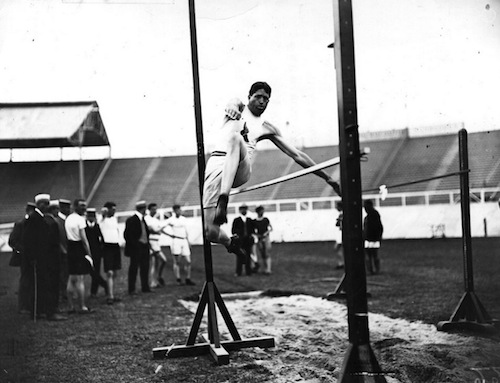 The world record high jump today is an even eight feet with a running start and a Fosbury Flop over the bar. Ray Ewry started flat-footed, went up until he was over the bar, flung one leg over, and sissored over with his other leg.

The long jump record today (with the jumper sprinting to the line) is 29 ‘4.36 inches. The triple jump record (with the jumper sprinting to the line) is just a hair over sixty feet.
The standing jump events have not been recognized as Olympic events since 1912,and lost international certification for other events in the 1930s, one reason Ray Ewry is such a lost figure when discussions turn to Olympic greats. But surely, you might think, in today’s world of well-trained super athletes there are plenty of people who could do better.
Nope.

Bob Kravitz wrote in his article, “The only place the standing long jump and standing high jump take place are at the NFL Combine in Indianapolis. There, some of the greatest young athletes in the world have failed to touch the marks Ewry established at the turn of the century. According to Nick Winkelman, director of performance education at Athletes’ Performances, no football player has ever come close to Ewry’s marks, which included 11 feet, 5 inches (in the standing long jump). ‘(A few years ago) we had Julio Jones just clear 11 feet and that would be absolutely jaw dropping,’ Winkelman told espn.com. ‘So to see anybody get into the high 10s–let alone break 11 feet–is absolutely phenomenal.’ ”
And Kravitz finally notes, “More than a century ago, Ewry jumped higher and longer than any NFL prospect in the history of testing. None have come close.”

The big name at the London Olympics this year is Michael Phelps, who is trying to win his tenth individual gold medal and his 20th medal overall. There is a dispute about how many gold medals Ray Ewry won early in the twentieth century. His supporters say ten. The International Olympic Committee recognizes eight because two of the medals were won in Athens in 1906, the year of the Intercalated Games.

Back in the early days of the Olympics, the International Olympics Committee scheduled the “Second International Olympic Games in Athens” for 1906. The Intercalated Games were created by the IOC to be held in the home city of the Olympics, Athens, between the quadrennial games. Olympic medals were given to Ewry for winning the standing long jump and the standing high jump (there was no standing triple jump then or in 1908, Ewry’s last Olympics). The sad thing is that today’s IOC does not recognize the games that yesteryears’ IOC created and recognized and therefore does not recognize two of Ewry’s ten medals.

But there remain some vestiges of those non-recognized 1906 games. They were the first games to have an Olympic Village where Ewry and the rest of the athletes lived during the games. Ray Ewrey likely marched in the first opening ceremonial march of national teams into the stadium as a separate event. The 1906 games also saw the first raising of national flags to celebrate the home nations of winning athletes. And they were the first to hold a closing ceremony.

One other thing about Ewry that makes his story especially impressive.

Ray Ewry was left an orphan when his alcoholic father took off and his mother died of tuberculosis. He was still a baby when he contracted polio that left his legs paralyzed. When he was a teenager a doctor prescribed some leg exercises for him. In time he was able to walk with crutches. But that wasn’t enough. By the time he became a college student at Purdue, Ray Ewry was walking. And jumping. He became an international star. The French called him “the frog man” because of the way he squatted before launching his six-foot-two body over high jump bars or into sand jumping pits.

A couple of tragic twists were added to the Ray Ewry story after his death. Ewry kept diaries during his childhood struggles with polio. His grandson, Tom Carson, had several of them. But they were stolen by robbers who got into Carson’s storage unit. And Ewry’s ten Olympic medals were stolen from the New York Athletic Club, where Ewry had been a member for many years. The IOC has re-done two of them. Carson holds out hope the other eight will be re-made eventually, even the two from the 1906 Athens games.

Ray Ewry was one of the great athletes of his time, a star of the St. Louis Olympics, probably the greatest Olympic jumper you never heard of. It has taken a century for someone to eclipse his individual gold medal record.