One of the largest crowds ever to gather at the capitol, maybe the largest one ever, was forty-two years ago today. The Carnahan funeral in 2000 is the only thing that rivals it since then.

July 20, 1970 was the first anniversary of Neal Armstrong’s first steps on the Moon. He, Buzz Aldrin, and Michael Collins were at the capitol with their capsule Columbia, which was touring the state capitols to celebrate the event. The big truck with the capsule happened to be at the Missouri Capitol that day. 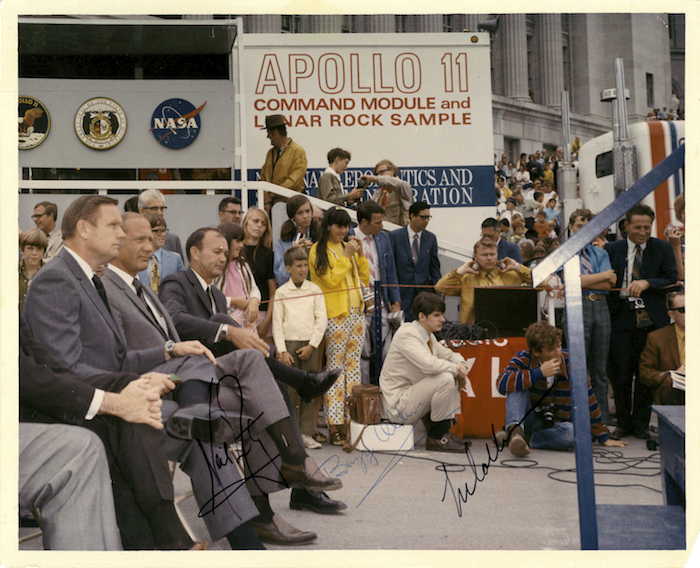 The young fellow in the gold coat at the table with the KLIK banner is me. Somewhere in the crowd was my assistant news director, a young fellow named Clyde Lear, who later left the station to pursue a non-broadcast opportunity.

Clyde had been on the truck that day, next to the capsule when the Apollo 11 astronauts climbed aboard to get their first looks at the capsule since their flight (old-times will remember that the first few astronauts who walked on the moon were immediately put in isolation to make sure they had not brought any bad moon cooties back with them and by the time they got back into circulation the capsule had been whisked off to be processed as a museum piece). Clyde actually got to ask Armstrong how the capsule looked. Armstrong thought it looked fine.

By that time Apollo 12 had taken three more men to the moon—Conrad, Gordon, and Bean. And Apollo 13 had returned after its harrowing flight with Lovell, Haise, and Swigert by the time the Apollo 11 capsule arrived in Jefferson City. So interest in space flight and Moon exploration were high. Thousands of people were all around the capitol although only a few could see the ceremonies that were held on the east side.

Armstrong told the audience, “We can’t help but be struck that our program is lmost unique in this war-torn world that is so badly separated by suspicion and conflict.” But he noted that the astronauts had encountered no hostilities in their world tour, “only warm and friendly interest.”

Aldrin felt the Apollo flights had changed mankind’s perspective on our place in the universe: “There are great problems that face our nation today, problems of population, environment and unrest. Some of these problems have been brought into focus by the space flights. The manned flights leading to Apollo Eleven spanned less than one year. The problems that are facing our country cannot be solved overnight…We must look toward the means of streamlining these ways of solving the problems in our country. And in these days of expanding technology these important domestic problems must not be solved at the complete expense of depleting the technological base that has made the dreams of centuries a reality…”

But it was Collins, who stayed in the Columbia while, as he said, Neal and Buzz were doing “their small stepping and giant leaping” on the Moon to speak the most sadly prophetic words that day.

“I was born in 1930 and with luck I expect to see the end of this century. And when I am thinking about it in 1999, I expect to remember the 1970s as a time when, oddly enough, man was hesitant about pushing his frontiers back. And in 1999 we just simply will not be able to understand that fact because by then it will have become clearly apparent that man does in fact have the capability to step out and explore his solar system and this is something we definitely should do.”

We would, indeed, be hesitant about pushing our frontiers back and we would grow moreso as years went by. Even as the first three moonwalkers visited Jefferson City that day they knew the Apollo program was facing a limited future. A year and a half later, December 7, 1972, I stood at the press site at Cape Kennedy and watched Apollo Seventeen leave the launch pad. It was the most incredible experience of my life—and there have been many experiences.

A little more than three weeks after that, Clyde Lear, who had been on the truck with the Apollo Eleven astronauts that day in 1970, launched the original Missouri Network, Inc.  He, Derry Brownfield, and some investors had put together the beginning of Learfield Communications in the thirty months or so since he and I shared terrestrial space with the first men to walk on the moon.

It will be 40 years this December 7th since any nation sent any people to walk on any heavenly body but our own. Nine of the twelve men who walked on the moon survive. The youngest, Charles Duke, is 76. Aldrin, at 82, is the oldest. The capsules they flew, including the three Apollo capsules that went to the Skylab space station and the fourth one that flew on the Apollo-Soyuz Test Project flight—the first United States-Soviet joint manned space effort—are museum pieces today.

Yesterday I saw a USA Today article saying that NASA, its budget repeatedly cut by Congress, was pulling back from exploration of Mars. The only nation to send successful missions to Mars that resulted in machines traveling on its surface, photographing features and collecting samples, is reportedly lessening its efforts on Mars. The International Space Station continues in orbit but some question its value. Our shuttles have joined our Apollo capsules as museum pieces.

Even as NASA was at its zenith with men walking on other worlds, our world was looking inward. It was the era of the Vietnam War and its protests, the civil rights movement and its challenges to our social structure, of Nixon and dirty tricks.

It has taken more than four decades for it to become abundantly clear that a nation, indeed, a world, that looks inward with the intensity we look inward today cannot look outward and dare to reach for the stars.

I sat fifteen feet from the first men to walk on a body that was not this earth and I heard them speak of the glorious accomplishment and the benefits that were coming to this country and to the world because of the efforts that let them accomplish that great goal. But I also heard them worry that we would lose that special drive and only in later years would we realize how much we had lost when we did.

And every day, the words Michael Collins spoke at our capitol grow more painful.