Thank the Lord!! Mike Lear and Bob Priddy were running on fumes last Friday because Jessica had left us to go play in the waters off Florida for a couple of weeks. Before that, Bob had been gone for ten days visiting fascinating places in Kansas and a fascinating granddaughter in Colorado. We haven’t had much time to update the musings on the Missourinet blog. But the world kept turning anyway.

Allison Blood left us at the end of the year to fulfill her lifelong dream of working at KMOX in St. Louis, where she is doing very well. It has taken us until now to find a new fourth person for our newsroom. But last September I met a young woman at a news director’s convention in New Orleans and I kept her audition disk because she was pretty impressive. She joins us today and you’ll soon hear her on the air. 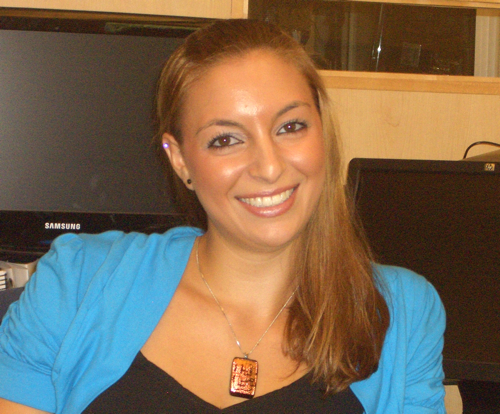 Mary Farucci arrived in Jefferson City last Wednesday and has been getting settled in to an entirely new culture. She’s already learned that Missourians are different from the people she’s grown up with and Missouri sure is different from where she’s been.
You see, Mary is from White Plains, New York where (she already has reminded us) they have tall buildings. She graduated from Emerson College in Boston (where they also have tall buildings). She already has remarked about how friendly people are out here (people were actually saying “hi,” or something to that effect as they passed each other on the sidewalk. And how quiet the main street of Jefferson City was when she and one of our other company employees, Kasie Zimmerman, went downtown to eat Wednesday night. And she’s noted how far apart things are out here. She and Kasie almost hit a deer on the way in from the airport earlier that evening. Almost hitting a deer is pretty common around here. Mary thought she had seen a deer once back east.

One of the first things we’re going to do with this city girl is get her to the State Fair where she’ll be around chickens and goats and pigs and horses and cattle and mules and people unlike those she ever ran into in Boston or White Plains. We’ve told her that St. Louis and Kansas City have tall buildings, too and she can see them just by driving for a couple of hours.

And we should remind her that the tallest non-government building in Jefferson City, Central Bank, is seven floors high, after all. And the seven floors of the bank are probably as tall as the first seven floors of the Empire State Building, or close to it. We just haven’t built the rest yet. But we could. If we wanted to.

The same is true of the Jefferson State Office Building. It’s 14 stories high.

Mary comes to us with a lot of enthusiasm and a lot of potential. We’ll have to teach her who the players are, where they are, and what they’re about. That teaching in some ways becomes a process of re-discovery for us because we have to explain things we have experienced but haven’t really thought about because we’ve been caught up in those experiences.

We got through these 198 days with a lot of help from a couple of our weekend voices, Nikita McCree and Mary Furness, who came in several times a week to give us a little breathing room. You’ll continue hearing them on our Saturday newscasts, but Monday through Fridays, there will be a new voice joining the three exhausted but reinvigorated musketeers, Jessica, Mike, and Bob.

Mary Farucci (you pronounce her name Fuh-ROO-chee) starts learning The Missourinet Way today. We’re going to do our best to make her a Missourian in the process.