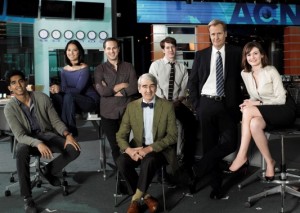 One of the first things we talked about in the Missourinet newsroom this morning was the first episode of HBO’s new series, “The Newsroom,” which aired last night. It’s about a cable television network where anchorman Will McAvoy (Jeff Daniels) holds pompous, temperamental sway, and the challenges he, the network, and the newsroom face when his production staff gets fed up with his attitude and moves to another show. That paves the way for a new production staff to take over (with a few non-defectors), setting up a clash between McAvoy and the new executive producer, a Christiane Amanpour-type of foreign correspondent (even down to the English accent) who is seeking the stability and the safety of a regular newsroom and with whom it seems McAvoy once had a relationship.

We agreed that we kind of liked the show—as a show. Not a reality show, certainly. A drama show. Stripped of the various relationships stuff and some other things that we recognized immediately require a suspension of disbelief, it kind of did okay portraying the way a major national television newscast goes on the air and with the anchor coming across as unflappable and controlled while there is chaos in the control room.

Several years ago I was in the control room watching Dan Rather do the CBS Evening News and the way the producers handled planned content and dealt with changing situations or potentially-changing situations as the program progressed had a feel similar to the feel during McAvoy’s newscast on “The Newsroom.” But throughout last night’s show, we in the business knew we were watching make-believe. It resembled what we do. But it wasn’t what we do.

The headline on the column by London Globe and Mail’s media critic Rick Groen called the show “all the news that’s fit to preach,” a takeoff on the New York Times’ motto of “All the news that’s fit to print.” And, indeed, last night’s show was pretty preachy. In our newsroom there is seldom any preaching done and the news director of the Missourinet usually reserves that privilege to himself. Other cast members in the Missourinet newsroom are the congregation. Unlike a television show about television news, there’s no need for any of us to do any preaching to a general audience that needs to be preached to as we go about our jobs.

Last night’s show also gave a little bit of a view of how newsrooms react when a crisis hits. In this case it was the BP oil spill in the Gulf of Mexico. You can forget about the character who just happened to have a sister who worked with Halliburton and his former college roommate in the board room at BP and therefore had some instant insider information. That was a stretch for us to accept but it was convenient for the teevee drama. What was accurate, however, is that moment when reporters have to decide if this really is a disaster that elevates the story beyond a standard fire/incident and demands more than the standard reporting that there’s been a fire and rescue operations are underway. Once a decision is made that the story is greater than the fire and rescue operations, there is a brief time of very fast decision-making about who to call; who do we have nearby that we can get to the scene; what contacts do we have; who has expertise we can tap; where are the players—and then the urgent calls start going out. Information is collected from various sources. Information is collated into a narrative. Somebody has to put it on the air, on the web page, on twitter, on facebook–get it OUT THERE!

One thing about last night’s show that also rang pretty true is that there was no emphasis on who had exclusive details or who beat the other news organization on the story. At times like that, the story becomes all-absorbing, and the focus is on getting the story, not beating somebody else to it. Celebration of exclusives comes on later review and usually it involves noting that one group had a detail before somebody else but that the other people had a detail we didn’t have. Big deal. Every organization has an obligation to its consumers first. There’s nothing wrong with keeping track of what the other people are doing and making sure we have those details, too. (The producers of Rather’s newscast the night I was in the control room with them had a couple of correspondents standing by ready to do stories that producers thought the competition might emphasize but that the CBS editors listed as lower priorities. The editorial decisions whether to go that direction were made on the fly and involved several near-instant evaluations—is the other network’s story really significant enough to bump what we already have in the lineup? The idea was to make sure an important story was not missed by the viewers of the program. If necessary, the newscast’s story lineup could be adjusted quickly to cover that eventuality and it would be done so smoothly that viewers would not realize it). But in times of crisis, the focus is most on what WE have to do.

Groen’s review of “The Newsroom” has a sharp edge that comments on the state of the broadcast news business today as dictated by “pandering, bean-counting” people outside the newsrooms.

Emily Nussbaum at the New Yorker magazine was likewise skeptical of the show, calling it “so naive it’s cynical.” She didn’t like the preachiness either, wishing the show delivered “drama, not just talking points.” An Associated Press reviewer found he show “plenty of fun to watch as a workplace comedy.” Andrew Romano, writing for The Daily Beast, calls the show a “far-fetched reverie about how (America) should be covered.” Noting that producer Aaron Sorkin also gave us The West Wing, Romano says both programs are filled with “handsome idealists emitting reams of encyclopedic Sorkinese as they canter through glassy office spaces on an improbable quest to redeem the American experiment.”

Sharon Pian Chan at the Seattle Times thought the show’s portrayal of a newscast coming together was the best part of the show. She appreciated the pontificating about the importance of journalism as a public service but says, “I only want to hear one speech about it each week.” Ken Tucker calls the show “noble and earnest” in entertainment Weekly and expects it to become “nutty, sanctimonious and, occasionally, right on target.”

Well, it is television, after all. This isn’t a documentary. It’s a drama show. Those of us in the Missourient newsroom–even though we do radio, not television–recognized some elements that seemed to touch on true life. We think back on other shows about newspapers and broadcasting, from WKRP to Mary Tyler Moore’s portrayal of Mary Richards and the wonderful supporting cast that made us giggle because we enjoy a good stereotype, too, to Murphy Brown, to News Radio to Lou Grant, and we enjoyed them. They were comedies or dramas based in newspaper newsrooms and in radio and television stations.

But that’s all they were and that’s really what “The Newsroom” is. It’s not real life. It’s not how things really are. There are some things that remind us of our world in electronic journalism. But it’s just a teevee show. That’s all. We’ll watch it as long as we’re entertained by it. But real news, while it might be entertainING at times, is never entertainMENT. At least not in the Missourinet newsroom.