A few days ago we wrote in this space about the proper use of bricks after we visited Joplin. But bricks are made for kissing, too. 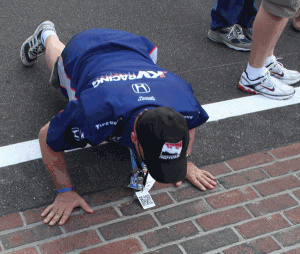 As regular readers of this blog know, one of our favorite places is the Brickyard, the Indianapolis Motor Speedway, where a three-foot strip of bricks marks the start/finish line. That yard of bricks, we have been told, has Missouri roots.

Thousands of fans get to kiss the bricks each year when they take tours of the track or at certain times during the racing weekends. It’s a big deal just to get out on that track to begin with. But kissing the bricks is pretty darn near as close to the pearly gates as some people will get while they’re still alive. 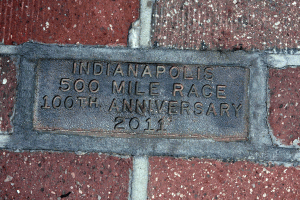 People who aren’t racing fans probably think this whole thing is pretty silly. But pick any sport that interests you ans ask yourself what one single piece of real estate in that entire sport would you most like to stand on? You don’t have to kiss it. Just stand there. Center court at Wimbledon? The start/finish line at Churchill Downs? The pitcher’s mound in Busch Stadium? The middle of the 50-yard line on Super Sunday? Center ice for the 7th game of the Stanley Cup playoffs? That’s how a lot of racing folks feel about kissing the yard of bricks at Indianapolis. 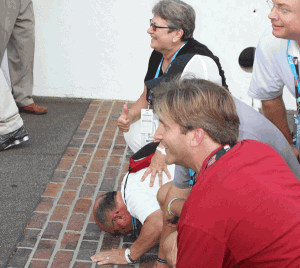 The place is called The Brickyard not because of the yard of bricks but because the track once was covered with bricks. When the track was created, it was paved with a multi-layered surface of gravel covered with taroid that the speedway was told would be better than concrete. But races in 1909 on the surface were disastrous. Chunks of the stuff worked loose. There were crashes and deaths and for a time the future of the speedway was in doubt.

Now comes a Missourian who saved the speedway (we confess to getting a little puffed up about saying that). His name was Will P. Blair. 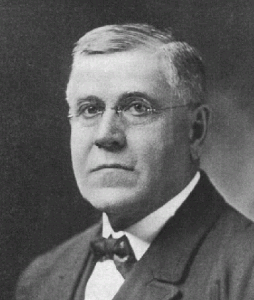 Photo courtesy the Journal of the American Ceramic Society (1925)

Charles Leerhsen’s book “Blood and Smoke” that came out in time for the centennial Indianapolis 500 last year recounts that Carl Fisher, one of the founders of the Speedway, had considered a concrete surface although such a surface had not worked well at the famous Brooklands track in England. He considered several other options including creosote-soaked wood but was on the verge of settling on something called “bitu-mineral” when Will Blair got his attention.

Leerhsen describes Blair as a St. Louisan who was the secretary of the National Paving Brick Manufacturers’ Association, a man capable of making a bold, hard and convincing argument that paving bricks were the future of modern streets, highways–and race tracks.

It was Blair, the St. Louis brick advocate, who convinced Fisher to spend the outrageous sum of $180,000 (one calculation we’ve seen say that’s the equivalent of about $4.23 million today) to cover the 2.5 mile track with 3,200,000 nine-and-a-half pound bricks. Two hundred workers laid all of those bricks in about three months, the last one being a brass-coated brick laid by Indiana Governor Thomas R. Marshall, a man that Leerhsen says is best remembered as the originator of the phrase, “What this country needs is a good 5-cent cigar.”

After he won the third Brickyard 400 NASCAR race, Dale Jarrett and crew chief Todd Parrott went back out onto the track, kneeled, and kissed the bricks, starting a tradition that is carried out each May for the 500 and each July for the 400.

If you would like to kiss the historic bricks at the greatest racetrack in the world (the first to which the word “speedway” was applied, says Leerhsen), visit the “ground tours” page on the Indianapolis Motor Speedway website.

I asked Leerhsen last year when I met him at the track last year where he found the reference to Blair being from St. Louis. In an understandable response because he didn’t have his reference files with him at the time, he couldn’t provide me with the specific reference but was confident the account was accurate. As a fellow author who doesn’t cart his copious research files around with him all the time, I found his response perfectly understandable.

So that’s another Missouri connection to one of the nation’s biggest sporting events.

We thank Richard Gevers and Karen Burns for catching these race fans enjoying the ritual at the 500 this year. What a great day to kiss the bricks. Just ask Dario Franchitti. He last Sunday became the first driver to kiss them three times.