The state’s second-tallest senator has the state’s biggest senatorial district. He likes to speak proudly of it and that might be why so many of his colleagues enjoy tweaking him during debate. 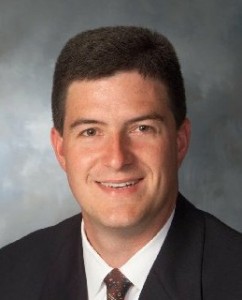 Senator Brad Lager lives in Savannah. But his district covers northwest Missouri. ALL of northwest Missouri north of St. Joseph. He reminds colleagues from time to time that his district covers 16 counties, has 76 school districts and 119 communities. It contains more square miles than the states of Delaware, Connecticut, and Rhode Island. it is only 100 square miles smaller than New Jersey.

Lager estimates he drives 6,000 to 8,000 miles a year visiting those 16 counties, 76 school districts, and 119 communities. It takes him three hours to drive from Watson, the westernmost settlement in Missouri—a town of about 100 people in Nishnabotna Township in Atchison County– to Walt Disney’s hometown of Marceline, in Chariton and Linn Counties, even though the entire trip can be made on four-lane roads.

Some of his colleagues enjoy celebrating the state’s largest senatorial district. We guess “celebrating” is as good a word for any about what they do. Senators Eric Schmitt of Kirkwood, who claims to be a good three inches taller than Lager (who is thinner) and therefore is the tallest person ever to serve in the Missouri Senate, and David Pearce of Warrensburg are the ones who take particular delight in the–uh–ceremony.

The senate has certain rules on decorum that are designed to foster formal debate. You are not to hear any senator during debate say to the tallest senator, “Well, Brad….” Nor are you ever supposed to hear someone refer to him as “Senator Lager.” That’s a hard habit for people who move from the House to the Senate to get into. In fact, some continue to stumble four or more years after their first day as a senator. It didn’t used to be that way but let us not wander into that discussion again. For now.
A specific senate rule says:

Rule 81. In proceedings and debate of the senate, the senators shall not be spoken of or addressed by their individual names.

And that is why Senators are addressed by their district number or the name of the county where they live such as “the senator from Boone” or “The Senator from the 13th,” (as in 13th Senatorial District). Rarely is the hometown used, as in “Senator from St. Louis,” but that’s what has to be used for those members because for legislative purposes St. Louis is considered a city and a county (we will wait for some other day to discuss the phrase “city not within a county.”) But with Senator Lager, it’s different. There are times when he has risen to speak or to offer an amendment or when someone wants to speak to him that he is identified by three or four of his counties in about five seconds.

Senator Lager’s time in the senate might be running short. He has his eye on a higher office this year and if he wins, someone else will inherit the largest senate district. Because there is the risk of losing this entertaining part of senate lore, we collected some excerpts of debate and have spliced them together so you get a bit of the flavor of the special culture the tallest senator with the biggest district brings to the senate.

That was Senator Schmitt in the chair for all of those counties although you heard Senator Pearce asking about the Senator from Mercer and the Senator from Livingston counties. We thank the tallest senator, Senator Schmitt, for being a willing co-conspirator in this effort to preserve the special nature of the second-tallest, but thinner, senator.

We often write in this space about serious stuff. Sometimes, though, it’s worthwhile to let you know that the senate is not all heat and thunder and passion. Sometimes a little diversion like listing sixteen counties has a subtle lightening effect on the place.