Rush Limbaugh is offensive to a lot of people. He’s God’s gift to others. That wide difference of opinion led to a bizarre event at the Capitol Monday afternoon that was a mixture of rights and wrongs. 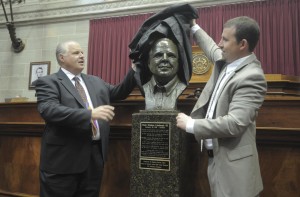 I had a college professor for Sociology 101 who started the semester by saying, “If I don’t piss you off, I’m not doing my job.” That got our attention. And that’s what Limbaugh does to audiences every day. He incites them, provokes them, shocks them … all to get their attention.

Art is the same way.

Its very purpose is to provoke thoughts and feelings. Just like celebrities, some art exists merely to be beautiful, some to enrich our lives through iconography, emotions, and yes, even outrage.

The freedoms afforded us have served us well, especially the freedom of speech, which we’ve used often to protest statues throughout the United States. Such as: 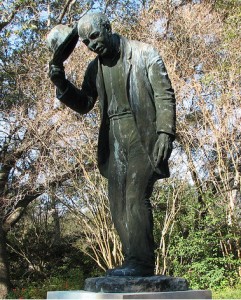 Natchitoches, La. — An 82-year-old statue of an elderly black man tipping his hat — “Uncle Jack” — has been removed. The NAACP began protesting the statue during the Civil Rights Movement in the ’60s. It was seen by the black community as a symbol of “the worst form of slavery known to human kind,” according to LSU history professor Charles Vincent. It was the first statue of a black man erected in the U.S. The Smithsonian wants it.

How do you think the Native Americans of South Dakota felt about an entire mountain — smack dab in the middle of their most sacred ground — bearing the faces of our nation’s founders? To them, I imagine it was like saying, “Here’s what we think of your holy ground, and while we’re at it, gaze upon a massive symbol of the very nation that has already taken everything else from you.”

Those feelings persist. Just four years ago, a gallery in Rapid City replaced a statue of a Native man with his hands tied behind his back. The Lakota thought it was degrading, even though the artist said it was meant to show that when Native Americans were put on reservations, they would never be able to live according to their heritage again. Nonetheless, the statue came down. 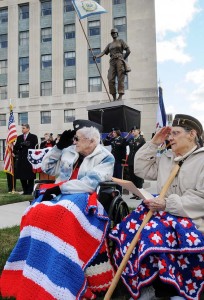 A statue in West Virginia depicts a somewhat masculine female veteran, and people there don’t like her. The chairman of the Senate Military Committee has suggested the statue be altered to depict her in a skirt, but local officials say it’s not likely to happen.

A slave statue was commissioned by the Downtown Indianapolis Cultural Trail. Amid outcry, the project has been cancelled. African-American artist Fred Wilson was paid for the work he’d done on the statue up to that point and was told he can “finish his work if he chooses and display it wherever he wants.” But it won’t be on the cultural trail.

Closer to home, opponents of an eight-foot statue of Hall of Fame singer / songwriter Chuck Berry in St. Louis said he should not be honored because he is a “felon and not a friend of women.” Others said he is St. Louis’ “most famous musical native son, who through his music changed race relations and culture around the world.” 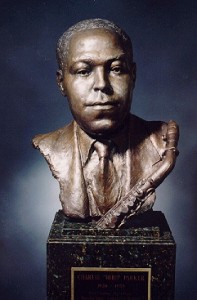 Charlie Parker was one of the most influential improvising soloists in jazz, a central figure in the evolution of bop in the 1940s. He was also an alcoholic and heroin addict, which eventually caused his death at 34 years of age.

In our own Hall of Famous Missourians, there are those who were afflicted by addiction, or viewed as racists, or had various extra-marital indiscretions. They were also long deceased by the time they were inducted.

Do I like Rush Limbaugh? No. There are those in our company who do, however, and I respect their right to do so. Do I give him credit for changing the face of talk radio in the United States? Absolutely.

But I can’t dispute that Limbaugh is, in fact, a famous Missourian. And I can cover events like the unveiling of his bust for the Hall of Famous Missourians and write a straight story void of personal opinion — and did.

I can even appreciate him for keeping the conversation going, for making people’s blood boil, for stirring in them a passion about politics and social discourse that gives them the voice to speak up. However, House Speaker Steven Tilley squelched that voice, and he did it in the People’s House. No matter what race, color, creed or gender you are, that should infuriate you. You just got locked out of your own House. The House that you pay for.

Critics have blasted Tilley for holding the unveiling in quasi secret, not giving notice for the public to attend, and even locking the public galleries of the chamber. We, the press, were given 25 minutes’ notice. Some news organizations that cover the capitol but have newsrooms some distance away had no chance to cover the event. If Kermit Miller of KRCG-TV, Jefferson City, had not been standing at Tilley’s office door when Tilley and Limbaugh walked to the House chamber and asked if it was okay to video record the events, media cameras would not have been allowed on the House floor to cover the event.

Democrat legislators, not yet here early on a Monday, were given no notice at all.

I defer to News Director and Capitol Historian Bob Priddy to draw the line in the sand:

“It is never, ever, proper to close and lock the doors of the Missouri House of Representatives for a private function. Never. “In 1924, a few days after the Capitol was dedicated, a private group held its state convention in the House chamber. The doors were locked, keeping outsiders away. But not for long. When Governor Arthur Hyde heard that the Ku Klux Klan was meeting in the House chamber and locking the doors, he ordered the doors unlocked and left open. The Klan didn’t like it but the doors of the People’s House stayed unlocked.

“We have covered events in the Missouri House of Representatives since 1967. The only times we recall the doors of the House being locked, and only selected people allowed in, have been for caucuses of House members. Speaker Tilley has unilaterally assumed the power to close the House for a personal event. Not even the Ku Klux Klan at a time when it was a powerful organization could get away with something like that.”

We don’t think that’s a right this state or this nation has bestowed upon the Speaker of the Missouri House.

9 thoughts on “Rush busts into the People’s House”