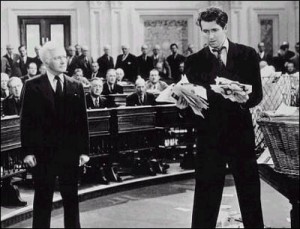 (CAPITOL STUDIO, 8:30 p.m., Thursday, May 3, 2012) — We’d be at home by this time on most Thursdays during the legislative session. Lawmakers usually wrap up their work weeks about mid-day Thursday. But tonight, a small group of senators is blocking a vote on a prescription drug monitoring bill that they says violates personal freedoms. As with most filibusters, this one is mostly an exercise in gnawing time off the clock with occasional instances of passion and rare flashes of verbiage that comes within six degrees of profundity.

We have been told that as we write this, negotiations on a new version of the bill are underway in hopes of satisfying Senator Rob Schaaf of St. Joseph, who started this exercise shortly after one o’clock this afternoon. He has his allies who have volunteered to take two-hour shifts during the filibuster. They’re all Republicans except for Maria Chappelle-Nadal, who had to leave after a short stint this afternoon to go home to University City where she is a school board member. But she promised to come back and take the 2 a.m. to 5 a.m. shift.

While he was on the floor, Schaaf was soliciting emails and faxes from people listening to him on the internet. It almost sounded as if he was auditioning for a job as master of ceremonies during his local NPR station’s pledge week. He got a lot of responses. We’ll have more at the end of this entry about how he got the means to do that.

This has been the filibusteringest legislative session those of us at the press table, the secretary’s dais, and the clerk’s office can recall.

“Our job as a senator is to slow down that train that is rolling down the track that wants to run over the liberties of the people we’re elected to serve in this body,” Senator Jim Lembke is saying as we write this. Lembke says, “A government that moves quickly is a very dangerous, dangerous thing.” He says a government that is slow in its actions better serves its people.

And that’s why the Senate exists. It has been described as the saucer to which the coffee is poured to cool (a depiction often traced to a conversation between Thomas Jefferson and George Washington).

Filibusters are excruciating things to endure — we’ve made that observation before. But they are important, so important that the Senate is extremely reluctant to move the previous question, a motion that cuts off debate and moves to a vote.

We have on our bulletin board in the studio a list of times the Senate has used the PQ to shut down debate. It’s been almost five years since it was last used. Interestingly, the last senator to use it is the sponsor of the prescription monitoring bill being filibustered right now, Senator Kevin Engler of Farmington. He used it four times to get passage of a proposed constitutional amendment designating English the language of all official proceedings of the state. It was used eight other times in that session.

The motion is used all the time in the House these days although we remember a time when it wasn’t used very often there either. But the House limits the amount of time anybody can speak on a bill and then is not bashful about shutting off debate and passing bills. That’s the freight train that Lembke is talking about. Although he has not specifically said the majority in the House runs that train, others have said so.

So bills reach the senate where they sometimes have to run the filibuster gauntlet, where senators like Rob Schaaf and Jim Lembke and, earlier this session, Maria Chappelle-Nadal can talk and talk and talk, hoping the passage of time forces closer examination of legislation and produces changes that head off unintended consequences, corrects mistakes, and moderates extreme positions. Sometimes it works. Sometimes it doesn’t.

Years ago, the Missourinet went to then President pro Tem Jim Mathewson and we said, “If you install a decent public address system in the senate, we’ll put your debates on the internet through the Missourinet web page.”

He did. So we did. The Senate now does its own streaming. But that’s why we’ve been able to write what Senator Lembke has said as he has said it (we thank him for speaking slowly enough for us to keep up with him). And it’s why Senator Schaaf was able to solicit all those emails and faxes that provided talking material — the internet broadcasts that have opened the senate to all of the people of Missouri.

And for the last couple of hours we’ve done what a lot of other people have been doing — listening on the internet to the Senate being the Senate.

They’re wonderful things, the internet and filibusters — in their own ways.

UPDATE: A short time after we went back upstairs to the senate press table, bill sponsor Kevin Engler brought in a compromise that included the statewide vote that Schaaf wanted although he didn’t like the language of the ballot title. The Senate had been debating a bill that already had passed the House. But by the time Engler brought in a new proposal there were not enough Senators left in the building to pass the bill that Shaaf had been blocking. Only 16 of the 34 senators were in the chamber at 9:35 p.m. when a voice vote perfected a rewritten senate bill — in other words, approved changes in the original proposal and put the bill into position for final passage.

But it might have been a sort of pyrrhic victory. The issue is likely dead for another year. Although Engler was holding out hope after the vote that the senate would send the bill to the House next week when all 34 senators are back, floor leader Tom Dempsey told us there won’t be a final passage vote. Schaaf has accomplished his goal — killing the bill.

Filibusters are best when they’re over. Only when the curtain comes down can the audience appreciate the clash of ideas and the collision of wills that has been played out before them. Both sides can win. Both sides can lose.

And, at last, both sides can go home for the weekend.

One thought on “Dead heat on a merry-go-round”