Press conferences don’t always go as planned — for those setting them up, those attending, or for the press. 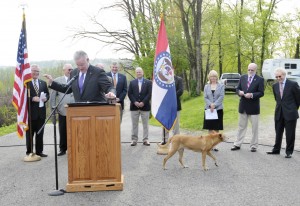 Faulty wires, bad signal, insufficient lighting, folks running late or failing to show up at all, spring storms, ringing cell phones … “what IS that buzzing noise??” … well, whatever can go wrong will go wrong, right? Sometimes getting the story to you is harder than we make it look.

Then there are situations that catch everyone off guard, but in a good way. And who better than Gov. Nixon to roll with it when his speech gets interrupted? That’s what happened at the ground breaking ceremony for a new rail bridge in Osage City, when this little guy decided Nixon was hogging all of the attention, and he’d like to be the one who was up front and center.

Nixon was willing to share the spotlight with the dog for a minute, but made sure to tell him he’d take no flack from his four-legged friend that day. (Photo courtesy Julie Smith / Jefferson City News Tribune.)