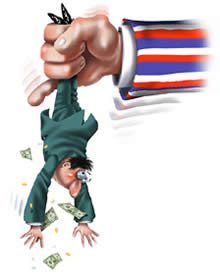 In this tax-cutting era, do you suppose the legislature could find a way to tax our minds a little less?

One of the roles of reporters is to translate complicated issues into common-language expressions that tell the public what is being done to, for, with, or without it  You’d think explaining tax policy would be pretty simple. You make money. The government takes part of it to pay for services you want or that your neighbors want. What could be complicated about that?

Well, it’s not complicated if you look at the topic one way. It’s when somebody says, “On the other hand…” that complications set in.

The other day, I bought something off the internet from a Missouri vendor. I was not charged a sales tax. Missouri has a state sales tax.  The vendor’s city probably has one. The county might have one. Anyone who has bought things through the internet from vendors in other states can probably count the number of times sales tax has been charged on the fingers of one hand.

The legislature has had proposals before it for a few years to tax internet sales.  Proponents argue that brick and mortar businesses in Missouri are at a disadvantage when they sell something and have to charge a sales tax because customers can buy the same thing off the internet and not pay it. Of course, shipping costs can be more than the sales tax so the customer often doesn’t really save much. But shipping costs are easy to overlook when you’re thinking of avoiding a sales tax.

Two dozen states have formed a compact and they’ve gotten 1700 companies to agree to collect a sales tax for items sold in those states. Presentations have been made for at least the last two legislative sessions urging Missouri to join that compact. This is where good old independent, eccentric, contrary Missouri can put its reputation on display.

Representative Doug Funderburk has a bill this year to put Missouri into the compact. But he applies a twist to it.  Consider this comment from a recent public hearing:

“We want to make sure, especially in this down economy, that we’re not asking Missourians to pay more taxes than they’re currently paying today.”

Rep. Funderburk wants to make sure that the state does not make any money by collecting taxes its people should be paying but aren’t. How does he propose to do that?  He would take the amount of money collected in internet sales taxes each year and calculate how much to to cut the state sales tax so the total tax collections do not increase. The government phrase for this philosophy is “revenue neutrality.”

His idea is to take the income from internet tax collections and use it to reduce the state sales tax of 4.225% enough so that the money going into the state general revenue account does not increase. Then the next year he does it again.

He apparently has not gotten the memo from Rex Sinquefield who is spending millions of his dollars to RAISE the sales tax so he doesn’t have to pay income tax. He, too, claims to be seeking revenue neutrality.

Funderburk’s idea works as long as internet sales continue to grow.  We haven’t seen anything in the bill that would keep the revenue neutral in a year in which the economy tanks and people don’t buy things with sales taxes attached. The bill does not seem to show an adjustment back UP to a level consistent with sales tax income the previous year to maintain revenue neutrality.

We’ve seen something like this before. About twenty years ago state tax collections exceeded the Hancock Amendment limits for total state revenue. The state mailed out a lot of little checks to thousands of taxpayers to get back to the Hancock limit. Then somebody said, “We should just cut the taxes so we don’t exceed Hancock. We need to stay revenue neutral.” So they did.

And then the economy fell apart. And because those tax cuts had no sunset provisions, a lot of money needed for state services disappeared, a disappearance made worse because the tax base had been diminished.  Instead of continuing to write checks, which kept us revenue neutral, lawmakers cut the tax base so that in bad times — when an increased number of people seek tax-financed help from the state — we were “revenue-negative.”   And we remain so today. Missouri is nowhere near hitting the Hancock limit again.

The federal stimulus funds that had helped prop up the state budget for the last three years are gone, leaving a half-billion dollar (or more) hole in the state budget  and Rep. Funderburk is proposing a plan to make sure collection of taxes people are supposed to be paying and collecting anyway will not be used to help shrink that hole. He says he’s going to rewrite his bill to make sure it does not increase state income.

Even if he gets his bill through the House, it will go to the Senate where leaders say this is no time for any kind of a tax increase, not even an increase in cigarette taxes that are the lowest in the nation. This is the chamber where one member maintained a couple of years ago that making people pay taxes they’re supposed to pay but aren’t paying amounts to a tax increase and we’re not going to have any tax increases.

The senate leaders we’ve talked to recently say internet sales taxes is an issue for Congress to deal with so there’s uniformity throughout the system.

The legislature has been passing resolutions right and left in the last few years telling Congress to do things.   I must have lost track of the resolution that told Congress to pass the federal internet sales tax collection law.  If such a resolution was passed, Congress paid about as much attention to it as it pays to the other directives Missouri has sent to Washington.

One thing to say about the legislature.  It definitely taxes the mind.  And there doesn’t seem to be much reluctance about increasing THAT tax.

One thought on “Taxing the mind”