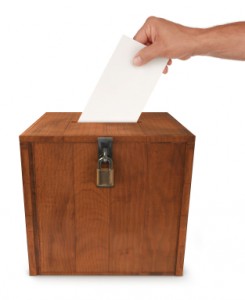 Here’s what set off these two in a noisy match in the state senate yesterday morning.

Missouri had a presidential preference primary yesterday that the state Republican committee had decided last fall would not have any value in deciding which presidential candidate Missouri’s GOP convention delegation will back. Those decisions will be made in caucuses at the local and district level and if we are to believe the state GOP, this election will carry no weight at all. The final national convention delegates will be picked at the state convention.

Let’s try to walk through this primary-ordial swamp beginning with Iowa and New Hampshire, two states that ferociously guard their “first in the nation” status in each presidential campaign year. But other states keep asking, “Why should they get all the fun?” Some other states decided to horn in on the “first” business and that became rather unseemly. In the end, the national GOP decided there were too many states having primaries too early. Missouri got the orders: move your primary back by a month or your convention delegation will be penalized.

The legislature sent the governor a bill last spring taking care of the issue. But the legislature overdid things, adding a provision that Governor Nixon found objectionable. He vetoed the bill and told legislative leaders that if they sent him a stand-alone primary election postponement bill in the special session, he’d sign it.

What could be simpler?

Some Republicans got their knickers in a knot and blew off a lot of steam about the national party having no business telling Missouri what to do with its presidential primary and that pushing it back a month would mean our primary would be useless because all the fun would be over by then and the candidates wouldn’t come here and spend money–if there were any candidates left by March other than the person who’s going to get the nomination. Some suggested cancelling the primary. Some suggested telling the national party to find a place where the moon sheds no light and vigorously placing its orders therein. There was much huffing and puffing and although some of the Republicans talked about cancelling the entire primary for 2012 to save six million dollars, they… dropped the ball.

Nothing got done. The state party, faced with the edict from the big folks upstairs, couldn’t wait for the Republican legislators to do something because a deadline had been given. The state party said, “Forget the primary. We’re going to hold caucuses.” And the cancellation effort disappeared into the fog.

So we kept the primary, despite all of the huffing and puffing. The failure of the legislators who are complaining now that the primary was a waste of money failed to act last fall when they could have avoided that waste and now they’re ranting and fuming while others in the party are defending the right of voters to express a preference even if that expression might mean nothing and even though the voters might not understand that their expression meant nothing and saying there’s nothing wrong with spending six million dollars so citizens can have their say at the ballot box, a sacred part of being an American. Or something like that.

And some of those defending the right of the voters to speak are blaming the state party for lacking the testicular capacity to tell the national party to seek out that moonless vista.
So we had the election yesterday. And 326,231 people voted. And some candidates got more votes than others.

Despite all the stumbling and fumbling and fuming and shouting in the capitol, thousands of Missourians sought out a quiet place yesterday and exercised a right the legislature was too inept to take away from them. Statewide turnout was only eight percent. Not bad considering all the time various political figures spent telling voters their votes won’t make a difference. Apparently 326,231 Missourians have a different set of values.

Those of us who sit at the Senate press table have gotten to see all of this discussion about whether I could vote up close. That’s one of the great things about being a reporter. We get to watch a system of government that is the worst kind of government—except all of the others that have been tried (as Winston Churchill noted). And then, if we choose, we get to be more than observes in the most basic way regardless of the cost of our opportunity to do so.

Some 326,131 people voted yesterday. I was that “1.” And so were all the others. The state spends seven million dollars on a lot of things that are less important.