(Missourinet Capitol Office, late Tuesday, January 24) — We’re finishing producing our stories about the gun sight stickers that showed up on a half-dozen legislators’ office door nameplates this afternoon, listening back to their angry voices from our interviews and from their comments on the Senate floor. 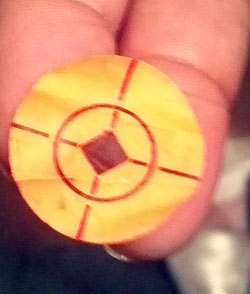 he senate was debating a polarizing bill on the Affordable Health Care Act and what the state should do about state health insurance exchanges.  Sometime during the afternoon break for lunch and committee hearings some — it is so hard not to use words like “fool” or “idiot” in situations like this, but name-calling neither proves nor accomplishes anything –person went around to the offices of five Democratic Senators and one Republican Representative and put stickers looking like gun sight images over their names on their office door plaques.   A couple of Senators tore theirs off only to find someone, perhaps the same person, had returned to put even bigger ones on the plaques.

The Highway Patrol and the Capitol Police immediately were called and started an investigation but the—-person—-had gone to ground.

We’ve been around the Capitol for more than 35 years.  We’ve seen plenty of times when political tension was high and when partisan emotions were pretty raw.  We’ve seen people demonstrating on the lawn and in the rotunda. We’ve heard people shout from the spectator galleries.  We’ve seen demonstrators in t-shirts (some with pretty explicit wording) waving signs and filling the hallways. But this is a new one. And it’s much more sinister.

In this era when anger seems to be cultivated, when differences too easily transition into intolerance, cowardice is an easy substitute for courage. Someone without the guts to speak up in person, face-to-face, to voice a disagreement; someone who apparently lacks the intelligence to persuade or to win with reason; someone who thinks some kind of intimidation or threat will make someone else run scared into their camp decided to imply a threat to the well-being of six people representing citizens of this state.

One of the shortcomings of our age is that some people think threats or implied threats or assumed threats are a funny thing to do to people who disagree with them.

“it’s only some stickers,” you might say.   But you don’t know, do you?    Only one person knows.  And that person, having now insulted some politicians and the political process, is unlikely to have the courage to admit what they have done.