When members of the Missouri House return to the Capitol today, they’ll spend their work days in the chamber facing a Herman T. Schladermunt’s glorious stained glass window called “The Glory of Missouri at Peace.”   They will have their backs to Charles Hoffbauer’s huge painting, “The Glory of Missouri at War.”  Our research for the book published last year about all of the wonderful capitol art did not indicate the Capitol Decoration Commission saw any symbolism in having lawmakers turn their backs on war and to work toward peace (in fact, we just thought of that as we started this note), but it does seem appropriate and something more than a few should think about when things get really nasty during debate.

We spent a good part of  last week working at home on the hundreds of research files and photographs gathered for that book—and for the next one which will be about construction of the building.  Part of the process has involved moving hundreds of pictures off of a computer onto disks.

One of the more intriguing things about dealing with pictures on the computer is the ability to enlarge them and explore details you normally would not see in the original photo.  Such is the case of the photo of the Missouri House chamber that was probably taken one afternoon in late March or early April, 1923. We found it in the Hoffbauer papers at the Archives of American Art, part of the Smithsonian in Washington. 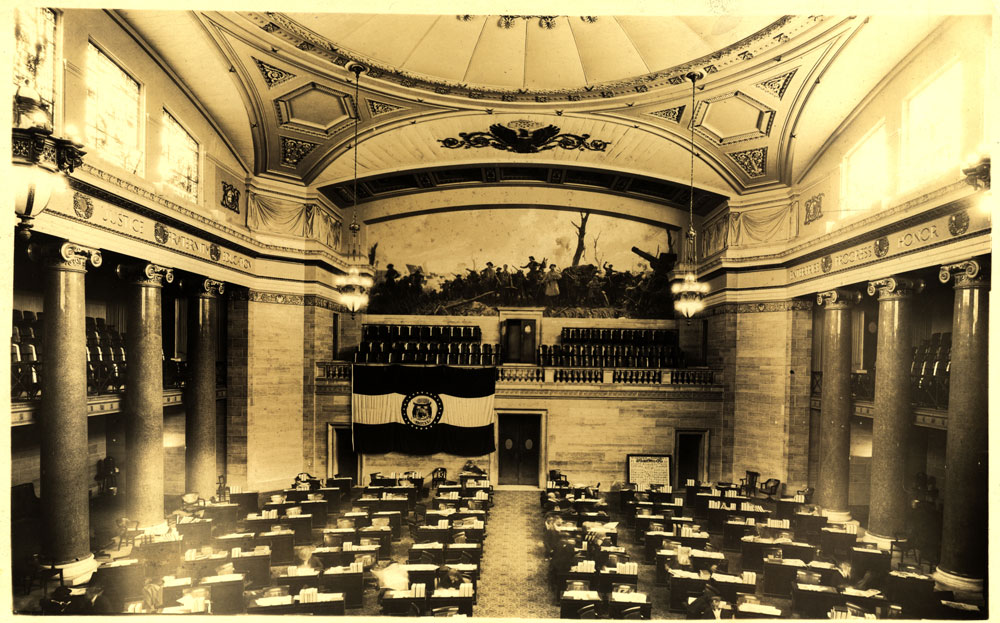 We know it was taken in late March/early April because of the way the sunlight comes through the windows and shines on the seats on the left side of the picture.  The camera is in what later became the press gallery, which is on the west end of the chamber, or “west” as people here define it.  Building city streets that follow ridges and the river channel skews definitions of directions.

It’s when you enlarge the picture on your computer screen that this picture gets a little eerie. That’s when the ghosts appear.

The ghosts are caused because the film used to take the picture all those years ago was slow and the shutter had to be kept open long enough that people moving around in the chamber become blurs. But those blurs tells us some things.  And enlarging the picture also tells us something about the House in those days.

The House is not in session in this picture.  The doorkeeper at the back of the room has a foot on his desk, something even the most lax Speaker would not allow when the chamber was meeting.  Look closely and you’ll see some of the representatives have laid their coats and hats (remember, men wore hats in those days-John F. Kennedy would not be along for another four decades or so to strike a blow for hatlessness) on their desks, an indication the House will not be in session for a while that afternoon.  .

You can see members talking to one another, gesturing to make a point.  Some appear to be writing or reading at their desks—two figures that might be some of the first women to serve in the House are about six or seven rows from the back are working at their desks. Many of the desks have the latest volumes of state statutes on them. There were only three back then. Now there are about twenty.

In the side galleries we can see containers of water with buckets under the faucets to protect the still new carpet from spillage—this was about the time that a representative introduced a resolution criticizing members of the press who sat at a press table on the floor at the front of the chamber back then for repeatedly missing the spittoons, thus soiling the carpet.

The picture moves from being just a photograph of the new Hoffbauer mural to become a few seconds of legislative life when it’s enlarged and the ghostlike images become apparent.  Those of us who have spent parts of our lives in the press gallery where the camera was that afternoon, can almost imagine voices and perhaps echoing laughter in these off-hours when people linger in the cavernous room.

At the back right of the chamber is a composite photograph of members of the legislature. But it must be there because some members of the House didn’t like it.  Enlarging that part of the image doesn’t help a lot because the wording at the top loses detail.  Does it say 51st?  Or could it be 52nd? It doesn’t match the composite portraits for the 51st (1921-1922) General Assembly or the 52nd (1923-1924) legislature that hang on the walls of the fourth floor today but it is closest to the 52nd.  The one in the hall eliminated a couple of the larger photos of state officers at the top and substitutes views of the House and Senate chambers. It could be that the lawmakers sent it back to the photographer and asked for some changes to be made.  It’s a little mystery captured that day long ago by the photographer in the front gallery.

The final version of the composite is one of many legislative composites that show us the faces of those who served our state.  Occasionally someone brings a child to the Capitol and goes to one of those composites and points to one of the pictures and says something like, “That’s your great grandfather.  He was in the legislature a long time ago.”  And the child looks at the picture silently for a few seconds and is eager to go back down to the museum to see the cannon or the stagecoach or some other artifact. Someday the members of the 2011-2012 legislature will be nothing more than faces in a similar composite.

Sometimes enlarging these old pictures makes you think you can hear things.  They sometimes make you think you could almost climb into a window or go through a door and see what’s “in there.”  Or maybe you can imaging these ghostly images moving, writing, talking. In some science fiction books and movies, people do that.  But this is the real world and all we can do is enlarge pictures and imagine and know that once those faces on the wall moved and spoke and worked in that chamber.

But now nobody knows what they said or how they sounded, what they posited or postured.  Someday not long from now those who come to work in the House and Senate today will join them only as images on the walls.  And someday a child might look at them.

And find them less interesting than some other artifact–downstairs in the state museum.