Happy New Year 2012 from the Missourinet.

We’re looking a year ahead today.

Oh, we’ve heard all of the latest doomsday talk about the Mayan calendar predicting the end of the world on December 21st, about the time of the winter solstice.

Some people make a living by pointing to this or that obscure prediction, calculation, or, in this case, a centuries-old Mayan calendar — and forecasting the end is near.  A Hollywood disaster movie purported loaded with special effects capitalized on the latest prediction. We haven’t checked yet to see if the History Channel has confirmed the end of the world with Nostradamus.

Our latest edition of AMERICAN ARCHAEOLOGY magazine spends several pages getting to the bottom of this Mayan calendar silliness. 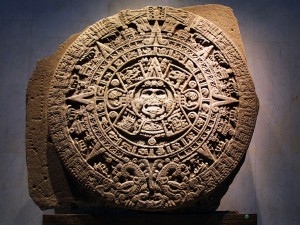 This whole thing is based on the Monument 6 glyph found at Totuguero, a site in southern Mexico.  The glyph,  is in poor condition. (A glyph is a carved symbol, in this case, an elaborately-carved rock filled with numerous symbols.)  It is the only Mayan calendar of the many Mayan calendars that have been found that mentions 2012. The magazine quotes Curator Simon Martin at the Pennsylvania Museum of Archaeology and Anthropology, who also is a Mayan epigrapher,  notes there is a reference to the year 4772 AD in an inscription at Palenque, a site in southern Mexico.

It’s a good article which includes, by the way, interviews with some of today’s Maya.  No, the Maya did not just evaporate centuries ago.  They’re still around, as are people of other so-called vanished peoples, even those popularly known as the Anasazi (which is a more modern Navajo word).   Scientists continue debating why they changed their lifestyles or locations so long ago, but they didn’t get wiped out by Spanish soldiers or taken away by interspace aliens or just crawl into a long-lost cave and wither away.

The Missourinet will make you this deal.  If you really believe this end of the world 2012 rubbish, transfer all of your assets to us on December 15 and spend the next six days preparing for your extinction or your cataclysmic rebirth in a new world of peace and love.  We’ll be glad to make good use of those assets on December 22.  We might even rewrap some of them as Christmas gifts.

And we’ll still be here to report on the 2013 legislative session.