The weather has turned colder, and it is once again quiet inside “The Walls.” No keys jingling, no cell doors slamming shut, no shouting between the cells. Nights are still inside the Missouri State Penitentiary, which sits along the Missouri River east of the Capital in Jefferson City.

Still, that is, except for the things that go bump in the night, for those of us who believe in that sort of thing … but that’s another blog. This is more about the, shall we say, “readily accessible” aspects of the prison. 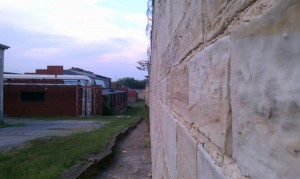 The wall of "The Walls," the Missouri State Penitentiary

I came to work for Missourinet in late June. As it happened, I knew one of the people presenting tours of MSP, as we call her. I soon found myself privileged enough to become one of those guides. (Point of fact: I was guiding the “ghost tours,” but again, that’s another blog.)

I don’t say “privileged” casually, either. I consider it a great honor to be one of the people who gets to spend so much time inside such immensely historic old buildings. The stories I’ve heard are only a fraction of those that can be told. I hope to learn many more in the coming years.

Tours continued through much of November this year until it just started getting too cold inside those old walls. It’s somewhat ironic to consider that we quit going there when it’s “too cold,” but for 168 years that didn’t prevent the prison from being used. Many of the its cells were never heated.

In recent times, its prisoners used portable heaters, heated blankets and anything else they could acquire (one assumes by any means necessary) to stay warm. The opposite was true in summer. Inmates had to find ways to stay cool. Some of the former guards tell me Death Row was almost unbearable in the summer. I can say from firsthand experience, it was no pleasant place to be during this year’s heat wave.

That has been another one of my great privileges this year: to meet and talk to some of the former guards, wardens and other staff of MSP who offer the historic tours. As I learn more of the site’s history, I hope to start giving those tours as well.

While I might one day be able to recite the stories, I’ll never be able to call them my experiences as those gentlemen and ladies can. Ask Michael Groose sometime about the salad bar, or Mark Schrieber about why one cheeseburger could be so danged important to the entire prison. Though, I think both stories are better told on-site. So being a shameless promoter for a moment, I say you’re better off taking their tours.

Chalk all that up under one of the many reasons those buildings have drawn thousands of people each of the last three years. There are the ghost stories (that’s right … another blog), there is the architecture, there is the history in a broader sense, but perhaps most of all, there are the human stories.

I can’t tell you how many thousands of people were held at that prison in its 168 years of operation. I can tell you some of the individual stories, more of the unpleasant than the not. I think the word “brutal” tends to be overused in some circumstances today, but without doubt it applies to what people did to others in that prison.

That is what I have carried with me after getting to spend so much time there. It’s one thing to read in a book or to hear from an orator about punishments like water torture, the cat-of-nine-tails and years of solitary confinement. It would be quite another to see such things in progress, which still happens in some parts of the world.

Somewhere in the middle is to stand in the places where you know it happened. It was impossible for me not to wonder who did it happen to, how did he or she come to be there, who administered it, how did that affect those parties, and how often did it happen? I found the sensation to be something of a cross between reverence and a strange, if morbid, fascination.

I haven’t even mentioned the gas chamber yet.

If you think about it, people lost their lives in many parts that prison in countless ways. What is it that makes the gas chamber different then? If you haven’t been in it yourself, I offer you two impressions that I find have stayed with me during this off season.

One is that it is so evident what happened there. If I tell you about an inmate whose life ended at location X elsewhere in the complex, there might not be much to look at; just a spot on the floor or an empty room. It’s not the same as going to an entire building created for the express purpose of ending the life of one or two people, or as seeing the chamber carefully built so as to contain the process and protect those conducting it.

It’s certainly not the same once you sit in those chairs and take a moment to consider some things. That is the second impression that lingers for me: to think what it was like to have the inside of that chamber that be your last view in this life, or to have the last sounds you hear be those knocks letting you know the process had begun, accompanied by the hiss and bubbling of the gas forming.

I still wonder what thoughts go through the mind of a person in that situation, but then one would also have to know how to think like someone such as, say, Carl Austin Hall or Bonnie Heady. I’d like to think, anyway, that someone who could participate in the cold-blooded murder of a 6-year-old boy would have a different perspective from my own. In our final moments, however, who knows?

One thing is certain, however. No matter how many times I walked Death Row this year, or in the 143-year-old dungeon cells, or into that gas chamber, it never quite felt like old hat to me. I came to feel fairly comfortable in those places after spending so much time in them, yes. But the feeling of the weight of what happened in those locations never goes away.

I rather hope it never does. I certainly hope I never stop wondering about the stories of each of the thousands and thousands of people who were held or worked behind The Walls.

None of my ramblings are meant to offer opinion on whether anyone who found themselves confined in this prison during its operation did or didn’t deserve to be there (though during its 168 years of operation, there were those that did not). My point, if I have one, is just to share some of what I think about as I look to next March, when tours are anticipated to resume.

I also spend a lot of time thinking about what the fate of those buildings will be. Some are likely to be torn down at some point, if it hasn’t already started. (One hears a lot of rumors about such things but nothing had started when last I was there.) Those buildings with the longest history or the greatest significance, however, are not rumored to be targets for demolition … at least not yet.

This reporter tends to be a pessimist — all things have a price tag. I imagine the one that would come with saving The Walls will be hefty. I certainly hope it will be picked up somehow.

There are still so many stories to tell.

5 thoughts on “If these walls could talk”