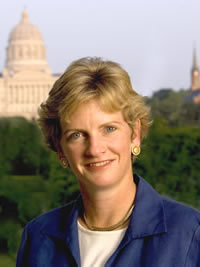 Robin Carnahan has sent a letter to supporters saying she’s not running for a third term after months of maintaining that she was.  Just a few weeks ago she brushed off our reporter, Allison Blood, at the state fair, reiterating that she was running.  We asked her spokesman in the Secretary of State’s office several weeks ago for an interview and never heard a peep back.

Within minutes, Rep. Jason Kander of Kansas City announced he was running.  Either he was well prepared or he got a heads-up before Carnahan’s supporters were told.  He claims he found out about the same time we did, which caused our Jessica Machetta to laugh and suggest to him that he might be in error.  But that’s his story and he’s sticking to it.

Behavior like Robin Carnahan’s announcement leads to a lot of speculation.  There’s got to be more to this than a decision to repudiate herself, one might think.  A lot of people who have put their political faith in her for a long time might think they deserve something better than an e-mailed letter that eventually gets around to saying, “I’m not running for a third term after all.”

Done with politics?  She doesn’t say.  The Lieutenant Governor’s office is open and if Jay Nixon wins his second term, the governorship comes open in 2016.  Congressional opportunities might exist.

It’s been eleven years since Robin Carnahan told the “Don’t let the fire go out” story at her father’s funeral on the capitol lawn.

She’s leaving the Secretary of State race.  Brother Russ has been crowded out of his congressional seat.

The fire is only flickering now.  And growing close to being only glowing coals.

Wish we knew why.  Wish Robin would tell us.