Want to see what someone looks like who writes books your children should not be allowed to read? Want to hear what she sounds like when she speaks and what words she uses? Want to see if she wears fishnet hose, a short skirt, and bright red lipstick? 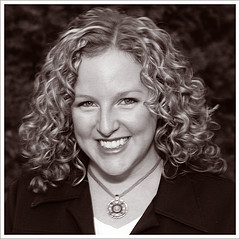 Get thee to Springfield late next month. Sarah Ockler will be in town. And while she’s there she will read from banned and challenged books. Right out loud and in public she will read some of this stuff!!

Sarah Ockler, in case you have not been watching the way the Republic School Board has decided to protect its students, is the author of “Twenty Boy Summer,” a novel that the school board has ordered off the general circulation shelves of the district libraries. The board has extended the same courtesy to Kurt Vonnegut’s most famous novel, “Slaughterhouse Five.”

Vonnegut has been dead for four years but someone from the Vonnegut Foundation will be attending events in Springfield and also reading excerpts from banned or challenged books. So the curious can see what somebody who believes “Slaughterhouse Five” is great literature looks like and how he dresses.

The picture we’ve seen of Sarah Lockler kind of reminds us of Bette Midler, the singer. Maybe its the curly hair or the big smile. She certainly doesn’t look like someone who would threaten the safety or virtue of a school child or of the general population.

The American Library Association and the Radcliffe Publishing Course lists those authors as creators of the most frequently banned or challenged books in the country.

I must confess that I read banned books. Lots of them. And I’m looking forward to reading a lot more. When I was in High School I read “Peyton Place.” It was not in the school library but it sure was in circulation.

In fact, I distinctly recall my fifth grade teacher reading an entire banned book to my entire class one year. It was about a boy from Hannibal and his slave.

Those of us who write for a living, whether it’s news stories or books or magazine articles, stage plays or screenplays, grow nervous when someone wants to “protect” someone else from reading or hearing something.

A lot of parents don’t want their children to read something on a subject that the children have been talking among themselves about for quite a while, probably, or don’t want them exposed to words the kids have known about for some time—and are likely to have tried to look up in the dictionary. Remember how disappointed you were when….well, maybe I shouldn’t mention the words we used to look up and found either absent or with definitions that didn’t tell us what we really wanted to know.

As for Sarah Ockler, challenged book author: She’s a college graduate who wrote her first novel after attending the Lighthouse Writers Workshop in Denver. She teaches adult fiction writing there. Her controversial book–The New Atlantic Independent Booksellers Association nominated it for one of its annual book awards. Girl’s Life magazine rated it one of the Top 100 Must Reads. The Young Adult Library Services Association nominated it to its Top 100 Must Reads list. The kind of attention she has gotten for “Twenty Boys” reminds us of the kind of attention Judy Blue got many years ago for “Forever,” another novel of teen romance. I read that one, too.

Here’s what Sarah has written on her blog:

“I get that my book isn’t appropriate for all teens, and that some parents are opposed to the content. That’s fine…But don’t make that decision for everyone else’s family by limiting a book’s availability and burying the issue under guise of a ‘curriculum decision.'”

And she goes on a few lines later:

“You can ban my books from every damn district in the country—I’m still not going to write or send messages or make teens feel guilty because they’ve made choices that some people want to pretend don’t exist.”

She’ll arrive in Springfield on September 29th, we understand. And she’ll spend the next two days taking part in the library’s observance of Banned Books Week. A lot of the authors listed earlier who have written books that have been banned or have been challenged by those who know what’s best for the rest of us are dead. But if you want to see what one of these creatures looks like up close, living and breathing, get thee to Springfield.

One other thing. The Republic school board is meeting soon to talk about the books again.