Allison Blood is one of our new reporters at the Missourinet. We decided our resident city girl needed to broaden her cultural horizons by visiting Missouri’s biggest agricultural exposition, the state fair. She ventured to Sedalia twice, once for herself and once to cover politicians at the traditional ham breakfast. She’s not yet ready to start wearing a seed corn cap and to escort her favorite bull into the show ring. But she is excited about what she experienced and wants to do it again. –Bob Priddy

They call me “City Girl” sometimes here at the newsroom. But truthfully, I’m not. I’m from the most suburban area of St. Louis I could possibly be from. Chesterfield, which is 30 minutes away from downtown St. Louis, and, not for lack of trying, is not a city itself. But nonetheless, the assignment to cover the State Fair was to be something of a culture shock. I grew up in Chesterfield aware of the rest of the state as a largely rural place. I had been to carnivals before with rides and food stands and I have seen farm animals before. But not like this. I had never seen a pig race, and certainly never eaten a Ham Breakfast. I had no idea how big tractors are. I was so surprised at the talent some small children in our state have at raising animals. When I was their age, I had a beta fish, and my Dad fed it. These kids raised cows and pigs. I was impressed.

But my assignment was not to be slapped in the face by rural America, but rather to cover the fair. This includes but was not limited to talking to politicians at the Governor’s Ham Breakfast. I will admit I was a bit distracted by the auctioning of a ham that went for $3,000, and then was donated to charity, but I found my way around a tent packed with a thousand ham and biscuit eating people to some legislators. Some wanted to chat about anything, others had protective entourages surrounding them, so reporters had no chance of getting near.

Secretary of State Robin Carnahan was especially hostile. When asked about her plans for 2012, she curtly responded that she had made an annoucement about that months ago. When asked how the campaigning was going, she dodged the question by saying she was enjoying a day at the fair with fellow Missourians. Granted, she had just gotten her plate of ham, but there’s no reason to be rude. 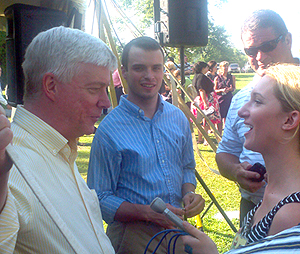 Liutennant Governor Peter Kinder showed up with a few friends to the Ham Breakfast, and these friends had no interest in reporters getting anywhere near him. His tatooed muscular entourage rarely broke from his side, and when they did, they quickly returned as a reporter approached. So I talked to one when he did break away, asking for an interview. Kinder had already told my fellow press corps members he would not be commenting on the allegations of his relationship with a stripper, so I told the handler I would stay away from the topic; I really wanted to know what he was going to do in the 2012 election. I had done stories previously about his frundraising and touring the state, so even if the more interesting topic was off limits, I had to follow up. And to my surprise, he agreed. I pulled him aside outside the Ham Breakfast tent as the crowd dispersed back to the fairgrounds, and we chatted. As he asnwered questions about his state-wide jobs tour, a group of about seven men surrounded us, tightly. My photographer could hardly get a picture through the wall of entourage members, and he’s 6 foot 3. After about two minutes of criticizing the Governor and outlining his plans for Missouri’s future, he shook my hand and walked away.

But overall the Fair met my expectations as a “city girl” venturing out West to the fairgrounds. The food was good. There’s nothing that I love more than Missouri corn on the cob, which was in no short supply at the fair. Pork was also popular, I photographed a line out the door and around the building of The Pork Place. I saw little pigs racing for an Oreo cookie, and big hogs lounging in the petting zoo, and even candy pigs. I had some of the best ice cream I’ve ever had at the Dairy Council building. Everyone else was going crazy for this dessert called pineapple whip, which looked to me like pineapple flavored soft serve ice cream, but I didn’t try any, but I had a chocolate covered banana. I really do love fair food. I brought kettle corn and saltwater taffy to the newsroom. My coworkers love fair food too.

I will say I underestimated what a good time I would have at the fair. I people-watched, ate until I nearly burst, and the Ham Breakfast was a who’s who of Missouri’s political world. Next year I will plan to take in a concert and perhaps enter in the First Lady’s Pie Contest. Heck, I might even bet on the pig races.

One thought on “My State Fair Lady”