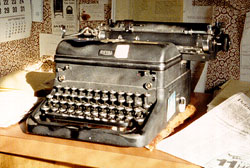 Brent Martin has returned from the frontier for a dentist’s appointment in Jefferson City and to ship his daughter off to college at the University of Central Missouri. He dropped in to see us. Brent looks none the worse for wear for his first couple of months in Lincoln, Nebraska where he’s taken over the newsroom of our Nebraska Radio Network.

We have nodded sympathetically as he has talked of dealing with only three members of Congress and breaking an entirely new set of bureaucrats to our way of doing things. He’s still adjusting to a state that has only two sports–football and Spring football.

He was cleaning out some files at home and brought some stuff back to us. One of the things he had in his files was a free verse verse commemorating a historic moment for the Missourinet.

January 3, 1990
An era has ended.
A bittersweet experience, it was.
At 4:40 p.m. today, the loyal Royal
was removed from my desk,
placed upon a shelf
and it its place
a computer.

Four pieces of machinery
replace one.

A keyboard
A screen
A printer
and CPU.

But then again,
Those four cannot replace
one Royal
in many ways.

That loyal Royal is in my office at home with a yellow piece of paper in its roller on which is written “Exhibit under development.”

People born on that date could have voted in the last election. Some of them have grown up, married, had their first children. We’ve gone from saving our stories on big floppy disks to little floppy disks to no disk drives at all. We’ve gone from megas to gigas, from desktops to laptops. We’ve gone from using 90-minute cassettes to using recorders that will hold THIRTY TWO HOURS on a flat little thing that is too easy to lose. The Missourinet twitters and blogs and books face and has cast pods although it’s been awhile since we did that. Sometimes we show pictures and on rare occasions we even shoot some video.
Once upon a time we covered news, typed stories and put soundbites on carts.

About the only thing we do the same today that we did in the days of the loyal Royal is we cover the news. All the mechanical stuff has changed. But the tools we use are never more important than the stories we cover. We just hope they help us cover them better.