We probably scan about twenty Missouri newspapers every morning. They help us know what’s going on throughout the state. They guide us in deciding whether we need to call one of our sixty-or-so affiliated stations to have them do a story for us that we otherwise would not have for our listeners.

Most of the newspapers we survey are on the internet but a few are still delivered in their plastic bags at our front door. One area in the newspapers we often check is the obituaries. Some are written by family members (we have pages and pages and pages of ways that people avoid using the word “died” and even have one obituary that goes on and on about what a nice fellow this person was without mentioning that he had been executed for killing a cop) but others are written by people on the newspaper staff.

Obituaries are valuable records for any number of reasons. They represent one of the three times most people are likely to get their names in the papers—the birth notice, the marriage notice, the obituary. They’re valuable for people looking for information about their ancestors that is more than the standard genealogical information that fills millions of family charts. And they’re important just because people are important and people’s lives amount to something to someone.

That’s why the work of Keith Zimmer of St. Louis has been so important. 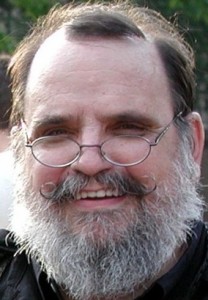 The index is on the library’s web page—and that’s a key part of the story.

The internet has been a boon to genealogists and Zimmer’s index has been a major source of information for them.

That index will include Keith Zimmer’s obituary that is in today’s Post-Dispatch. He died Saturday from blood clots in his lungs. He was 61.

The newspaper notes, “This obituary will be among the first that Mr. Zimmer didn’t index since he started…”

Keith Zimmer has joined the crowd of those whose lives he honored with his own life’s work.