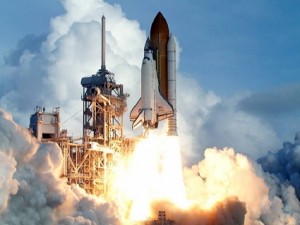 One more time the space shuttle will leap quickly beyond our sight. And if everything goes according to schedule, it will land back at Cape Canaveral on the 42nd anniversary of men’s first steps on the moon.

This year is the 49th since President Kennedy explained why it was important to this country to explore “this new sea.”

“We set sail on this new sea because there is new knowledge to be gained, and new rights to be won, and they must be won and used for the progress of all people. For space science, like nuclear science and all technology, has no conscience of its own. Whether it will become a force for good or ill depends on man, and only if the United States occupies a position of pre-eminence can we help decide whether this new ocean will be a sea of peace or a new terrifying theater of war. I do not say that we should or will go unprotected against the hostile misuse of space any more than we go unprotected against the hostile use of land or sea, but I do say that space can be explored and mastered without feeding the fires of war, without repeating the mistakes that man has made in extending his writ around this globe of ours.”

One of the four members of this mission is Dr. Sandra Magnus, the (for now) last of a series of astronauts with Missouri ties to seek that new knowledge. She received her BS and MS degrees from what was then the University of Missouri-Rolla. She also worked for McDonnell-Douglas Aircraft Company as a stealth engineer. This is her fourth flight. On her second flight, she took up residence on the International Space Station, where she spent four and a half months.

She had not been scheduled to make this last shuttle flight because this flight was not supposed to happen. She’s part of the smallest crew since 1983 because she and her three crewmates had been listed as the crew on a standby orbiter for last spring’s flight of Endeavor. If Endeavor had been unable to return to earth, these four would have flown Atlantis to the space station to rescue that crew. But Endeavor’s last flight went well and NASA decided not to waste its last remaining space-ready shuttle. That’s why STS-135 with UMR graduate Sandra Magnus is taking one more load of cargo to the ISS.

Missouri has played a major role in the half-century of this country’s manned space program. McDonnell-Douglas began building Mercury capsules in 1958 and provided all six of the ones that carried astronauts into space, starting in 1961. McDonnell-Douglas also built the two-man Gemini capsules that laid the groundwork and developed many of the techniques that were important to the Apollo program.

Missouri’s space history has not been all glory, however. The crash of a NASA plane into the roof of a McDonnell-Douglas hangar in February 1966 killed astronauts Elliott See and Charlie Bassett, who had been on their way to check on the progress of preparing the capsule for their Gemini 9 flight. Their deaths led to their backup crew of Tom Stafford and Gene Cernan making that flight. The incident led to a realignment of astronaut teams that affected the crew lineups for the moon missions. Stafford commanded the Apollo X mission that was the first to take the lunar module to orbit the moon and practice the landing sequence before Apollo XI made the first landing a few months later. He later was on the Apollo-Soyuz Test Project flight, the first joint flight into space by the USA and the USSR. Cernan was the last man to walk on the moon as the commander of Apollo 17. I was at Cape Kennedy to watch Cernan and his crewmates blast off. I have seen many impressive things as a reporter but that liftoff is the most awesome thing I have ever experienced.

It was the shuttle that let Missourians finally fly in space. University of Missouri-Columbia graduate (and St. Louis high school graduate) Richard Richards made four flights. Tom Akers, born in St. Louis raised in the Eminence area, and a graduate of the University of Missouri-Rolla, also made four flights. On his third one, STS 49, he set a record of 8 hours 29 minutes “walking” in space. Two other astronauts joined him on what remains the only three-person EVA in NASA history. On a later flight, STS 61, he helped repair and upgrade the Hubble telescope–which is named for Marshfield native Edwin Hubble. Akers retired to teach math at the former UMR, now Missouri University for Science and Technology.

Janet Kavandi, born in Springfield, graduate of Carthage High School, got her bachelor’s degree from Missouri Southern State Univerrsity in Joplin and her master’s degree from UMR. She made three shuttle flights.

Linda Godwin, a Cape Girardeau native who made four flights received her bachelor’s degree from Southeast Missouri and her MS and PhD. from the University of Missouri-Columbia.

The first private astronaut, the first paying, working passenger on a space flight, was Charles D. Walker, who was the Chief Test Engineer and Payload Specialist Astronaut while he worked for McDonnell-Douglas. He flew three missions. Although Walker was born in Indiana, he has ties to Missouri through his wife, Susan, a native of Joplin, and because he worked for McDonnell-Douglas.

A quarter-century ago, several other Missourians tried to join that list. The Challenger tragedy crushed those hopes. But I have in a folder in a file cabinet in my attic a NASA certificate noting that I had been one of the 1,033 people who wanted to be the first journalist in space. I didn’t make the first cut but three Missourians did–Diane Ackerman, then working for Parade Magazine in St. Louis, Al Wiman, then a reporter for KMOX-TV in St. Louis, and Robert M. White II, the publisher of the Mexico Ledger. The list was pared even more later. But the citizen in space movement ended with the Challenger explosion and the death of teacher-in-space Christa McAuliffe. A friend of mine who covered the disaster for CBS later told me the astronaut corps put its foot down after that and decided space flight was best left to professionals and was not something for the man or woman off the street, although a teacher did fly in space many years later.

So Sandra Magnus and three colleagues are taking the last shuttle into space. We do not know when this country will have a new vehicle of its own that might take more Missourians into orbit and beyond. She and all of those who have flown on our shuttles for the last thirty years have validated President Kennedy’s hopes for new knowledge being gained. In these thirty years, the shuttle has taken many astronauts from other countries aloft. Some of their countries are more free then they were when Kennedy outlined his hopes for outer space. The men and women who have flown the shuttle and have built the space station, have made space a force for good. The shuttle has been that pre-eminent American force that Kennedy felt was the key to creating “a sea of peace.”

Sandra Magnus agrees with those who feel it’s time to move on, to develop new technology that takes us farther. We have posted part of our interview with her with today’s story on Missourinet.com. We’ll post the rest when she and the others aboard Atlantis come back on the 20th.

Americans will continue to fly in space. Until a new American vehicle is built, whether privately or under the auspices of NASA–a process the experts say could take six to ten years–our astronauts will be taken to and from the space station in Russian Soyuz capsules. At least one person already is in line to be the next generation of Missourians in space. Lebanon native Michael S. Hopkins was part of Astronaut Group 20 selected in June 2009. Hopkins is an Air Force Lt. Colonel. He already has been penciled in as a crew member with two Russian cosmonauts for Expeditions 37 and 38 to the ISS in 2013-14

The United States manned space flight program thus comes full cycle with STS-135. It began with Alan Shepard’s Missouri-made Mercury capsule’s suborbital flight fifty years ago this year. It concludes with an astronaut that Missouri can claim on this last shuttle flight.

But we have another Missourian waiting to take the next step.