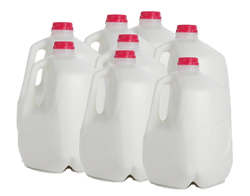 Get out those milk jugs full of water that we used Wednesday to try to understand how much water is coming out of upstream Missouri reservoirs and we’ll use them to explain why the river is going to be running at or above flood stage all summer and into the fall, probably.

Today we’re going to continue explaining in a familiar way how much water we’re talking about.

Jody Farhat is the Chief of the Water Management Division for the Corps of Engineers. She is one of the stars of the daily briefings by the Corps that update the media, Indian tribes, state and local officials, and others. She and her staff are the ones who decide how much water will come our way from the six reservoirs on the Missouri River. She works in Omaha and is an Iowa native so she understands downstream challenges when upstream reservoirs are swollen.

She told us Wednesday that the upstream reservoirs have broken a record set 36 years ago when measurements showed they were holding 72.4 million acre-feet of water. 72.4. Imagine all of Missouri and all of Tennessee under one foot of water (assuming both states were flat). That’s ALMOST 72.4 million acres. .

We use simple numbers sometimes to quantify amounts that we otherwise could not imagine. That’s where 72.4 comes in. Our minds can grasp 72 acres and we can understand one foot of water. The Corps of Engineers is holding 72.4 MILLION acre-feet.

It takes 325,851 one-gallon milk jugs to hold the equivalent of one acre-foot of water. Just one.

Let’s put it another way.

Dr. Peter Gleick, the President of Pacific Institute says one million acre feet is 1.6 times as much water as the entire city of Los Angeles uses in a year. Our shade tree mathematics says the Corps of Engineers is holding enough water in its reservoirs to meet the needs of Los Angeles for almost 116 years.

And it’s all up north of us. And you know what else? The snow isn’t done melting and turning into the water that will eventually end up in those reservoirs. And it’s been raining up there, too. .

But relax. We’re not going to get all 27.6-billion gallons of water. The Corps will be passing down to us only the amount necessary to lower the six reservoirs to their normal pool levels. That is still going to be a lot of water, even though record amounts are flowing through the dam gates of those reservoirs. We’ve asked Jody Farthat how much of the 72.4 million acre feet of water will roll past our Missouri River (and eventually lower Mississippi communities) before the reservoirs are down to their normal levels. She hasn’t told us a specific number but in our media teleconference on Wednesday she told us the peak releases will continue into August.