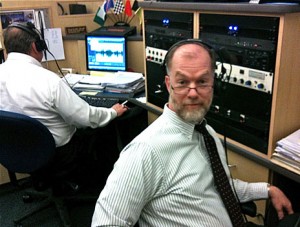 The Missourinet is running the last story today that Brent Martin has done as a member of our staff. He’s done a lot of them in his 15-plus years as the managing editor, the right-hand man, literally and figuratively, of the Missourinet news director. Brent has been sitting about eight feet to my right for most of those years. For most of a couple of years he was on my left when we were in the basement in a temporary newsroom while our regular newsroom underwent a too-long renovation.

Brent is becoming the news director of our Nebraska Radio Network—Learfield Communications also owns news networks like ours in Nebraska, Iowa, Wisconsin, and South Carolina. He’ll be based with our affiliate in Lincoln, KLIN. Here’s what the news staff at KLIN, and the stations of the Nebraska Radio Network will be getting:

They’ll be getting a highly-professional, deeply dedicated journalist. They’ll be getting someone who helped CBS cover the great flood of 1993 while he worked at our affiliate in St. Joseph, KEQ. They’ll be getting someone who has spent all of these years covering politicians—good ones and bad ones–, candidates (ditto), and the agencies that have much to say with the our daily quality of life. He’s covered members of congress, U.S. Senators, presidential candidates, and others seeking and holding power. He’s covered campaigns, all-night election returns sessions, and national political conventions.

He has a highly-sensitive BS meter and more than enough sense to shovel through that material to get to the facts. He has spent 15 Missouri legislative sessions covering the Missouri House, which has 163 members, a few of whom show distinct shortages of maturity, ethics, altruism, and even intelligence. He’s going to a state that has one legislative chamber, not two as Missouri has, and only 49 representatives who are known in Nebraska as senators. It will take him a little time to learn the names and faces. But he has seen the spots of plenty of political leopards and knows how to recognize them.

He’ll tell stories of how things were at the Missourinet, at KFEQ, and even at KOKO in Warrensburg, Missouri where he went to college. He will insist on spending the first 15 minutes or so each day talking about the Kansas City Royals or the Kansas City Chiefs—he bleeds blue at some times of the year and red and yellow at other times. He thinks the Sacramento NBA team should still be the Kansas City-Omaha Kings.

Do not, however, Nebraska sports fans, expect him bleed Cornhusker red or to spend 15 minutes a day doing autopsies on the latest Nebraska football and basketball games, at least not for the first few years. It will take several years for him to stop following the Missouri Tigers and buy a bunch of stuff with “N” on it. Be patient. It might never happen but he has our permission as he leaves us to at least root for Nebraska at appropriate times. The good people at the University of Nebraska have made his transition easier by moving to the Big Ten, eliminating any need to discuss the Missouri-Nebraska Big Eight/Twelve relationship. Circumstances might match Missouri and Nebraska in a bowl game or the NCAA tournament some day. In that case, understand that Brent is a patient and tolerant and will dispense only gentle ridicule when the Tigers prevail and will respect the magnanimity you show should the outcome unfortunately be reversed.

Nebraska also is getting a poet, a talent we did not know about until recently when Brent was invited to read some of his works at a poetry festival in Warrensburg. He used to be a pretty good church league kind of basketball player, a guard, but that was when he was younger. He played on our co-ed softball teams a few times. We learned some things by being with Brent on the diamond and on the basketball court. He hates to lose. He takes his games and his work seriously.

Brent’s wife, Tami, is an elementary school counselor. His daughter, McKenzie, is a high school graduate ready to take on the University of Central Missouri this fall. He recently bid goodbye to his beloved Saturn that he bought when it and the company were new. It made it to 200,000 miles and more (the odometer worked irregularly for several of its last months) and tolerated various parts falling off of it—everything from radio knobs to mufflers—until the odometer read 200K. But shortly after that, one last thing quit working and Brent decided the thrill was gone. He has settled nicely into his new Malibu. His father still has a collection of Studebakers that Brent will be glad to discuss with lovers of defunct automobile companies.

But he likes to laugh. He enjoys life’s absurdities, missteps, and contradictions. He laughs about those things when common folks are involved. He writes about them when politicians are involved.

He has spent his life knowing where all the counties are in Missouri, and the rivers, and the communities, and the voting patterns. The Nebraska folks will have to replace his knowledge of the Missouri, Mississippi, and Osage Rivers with the Nebraska segment of the Missouri as well as the Platte rivers and their tributaries, the counties and communities on the great plains, the significance of San Hill Cranes and the history in places like Fort Robinson, North Platte, and Red Cloud. He’ll need some help in evaluating what winter is. When a major highway in Missouri is closed because of snow, that’s big news. In some parts of Nebraska, it’s just winter, as we understand it.

Brent appreciates history and the way the past has shaped the culture of a state. Nebraska’s history and culture are different from Missouri’s. He’ll enjoy learning from the people of Nebraska about them.

We appreciate all of the personal and professional things Brent has been to us in the Missourinet newsroom and as a member of the Capitol press corps. The Missouri House press gallery is losing a colleague and a resource. So are we. But life is a constant matter of moving on, of beginning new legacies, of growing new expertise. What is ending here is beginning there.

We will miss the daily personal and working relationship with this good man, this good reporter, this good friend. But, hey, this isn’t a eulogy. It’s a message of thanks from us and a message to those who will come to know him better that Brent Martin is good at what he does and good at who he is.

We almost forgot one of the most important things to tell our friends in Nebraska:

Nebraska’s coffee shop economy is soon to experience a major upturn. If Brent Martin were any closer to cups of coffee they would be Siamese twins. I am surprised that the coffee shops in Jefferson City have not yet draped their doors in black.

Nebraska better have good coffee or you’re going to have one really angry reporter in your midst.