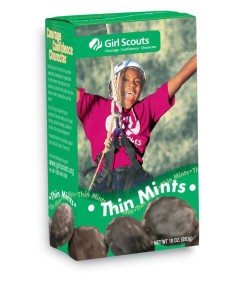 I was listening on the internet to our affiliate in Joplin, KZRG, as I have been almost every workday morning since the May 22nd tornado and I heard that some Girl Scouts had taken a cache of cookies to the staff. Included in that cache were the most magical of Girl Scout cookies: Thin Mints.

Thin Mints are important parts of the operations here at the Missourinet. But they have to be respected in their care and used appropriately.

I am known as the Thin Mint King in our office and each year, mothers of Girl Scouts make sure that I have ordered my annual case of Thin Mints. I keep my Thin Mints under my desk and parcel them out to the news staff as rewards when we have been working hard or have had a stressful day. Sometimes I share them with other people in our building, such as those days when we have carry-in lunches. I’m not real good t making vegetable plates or little weenies in crock pots, so I carry-in some Thin Mints from the vault under my desk.

It is important to remain rather strict in what qualifies for those rewards for hard work and stressful days. That is why I still have several cases under my desk or in a storage room downstairs or even in my den at home. The other day I opened a case from 2004.

You might be astonished to hear that my Thin Mints vault has held some of these magical cookies since 2004 but I have always felt that hoarding Thin Mints was important to my survival. If there is ever an atomic attack, I will have the only large supply of Thin Mints anywhere in this area and I can use them to bribe my way into somebody’s fallout shelter.

I am sure you are surprised to learn that Thin Mints from 2004 are still good. They are more than good. They are scrumptious!!! Thin Mints keep well at room temperature. In fact, the worst think you can do with Thin Mints is freeze them for any extended time. If you’re going to freeze Thin Mints, do so only for a short time. Freezing dries them out and makes them stick together. They break and flake when you try to take them apart and their mintiness seems to diminish. So freeze your Thin Mints only for short times if at all. Room temperature preservation works just fine.

And there seem to be no adverse health effects from consuming long-term stored Thin Mints other than the fact that Thin Mints, I have been told, have a lot of fat in them, which is what helps make them taste so good. But my colleagues throughout the office tell me that it is as easy to devour an entire column of seven or eight-year old Thin Mints in one sitting as it is to devour the ones that are brand new.

It was good to hear that the Girl Scouts had delivered some Thin Mints to the gang at KZRG that continues to do so much to help Joplin recover from the tornado. Thin Mint Therapy might not be recognized by professionals in the counseling field but I am convinced that it can be a strongly positive factor in helping people deal with long hours, high levels of stress, and fatigue. I could tell just by listening to the guys on the air this morning that they were proving this hypothesis.

Perhaps organizations that respond to future disasters should not only send truckloads of water but they should send some truckloads of Thin Mints, too.