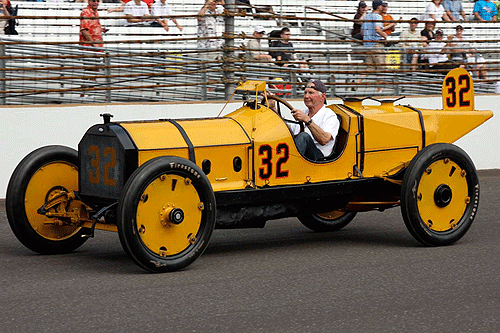 This guy looks like he’s having a blast, isn’t he? You bet he is. The car is the Marmon Wasp that Ray Harroun drove to victory in the first Indianapolis 500 on May 30, 1911. Harroun and his relief driver Cyrus Patschke (who drove about 32 laps in the middle third of the race) averaged 74.6 miles an hour.

This past weekend was the big centennial celebration for the Indianapolis 500 and several of the previous winning cars were taken out of the speedway museum, fired up, and driven around the track as part of the celebration. The century-old Marmon looked great and sounded great with its deep roar as it “sped” past the crowd at nowhere near the speed it attained in 1911. But just seeing it as something other than a static museum display and HEARING it was a stirring thing.

And the guy with his hat on backwards having fun behind the wheel is Parnelli Jones, who was the first driver to turn a lap at 150 miles an hour at the speedway, the 1963 winner in a car that carried the number 98 and was owned by J. C. Agajanian.
This was a weekend of history and it reached a climax in a most fitting way.

The Indianapolis Speedway is a special place for a lot of reasons that vary from individual to individual. It’s the place I go because my father took me there for the first time when I was 12, as I took my son there to see his first automobile race of any kind when he was 11. It has become more than a family tradition, though.

Spring begins when I get out of the car and step onto the grass of the speedway infield every May. The legislative session with all of its pressures, complications, and craziness is finished. I am at last free of all of that. The grass is green. The sun is shining (usually). And men and women are going frighteningly fast around a race track more than a century old. The trip to Indianapolis is the sign than life is back to normal.

Normally, I wouldn’t expect to hear anything about Missouri politics, Missouri campaigns, or any of the stuff that we at the Missourinet spend our lives focusing on. But I almost immediately l got an idea of how transcendent the Joplin tornado is. As I listened to an Indianapolis sports radio station Friday evening on the way to the city, I heard a discussion of the relief efforts for Joplin by the Indianapolis Colts NFL team. And from time to time as I wandered through various crowded venues at the speedway on Saturday, the day before the race, I heard the word “Joplin” bubbling up several times in various ways.

Interesting. Thousands of racing fans are celebrating the centennial of the Indianapolis 500, lining up for autographs, checking out a parking lot full of pace cars, a couple of lines of midgets and sprint cars from the 20s through the 70s on display in the plaza—–and I catch out of the corner of my ear the word “Joplin.”

Every year I go to Indianapolis in May hoping to find a Missouri connection to the 500. That’s difficult because many of the drivers are from other countries and only a few Missourians have driven in the 500 in the last century. One year I did a story on Missouri-made ethanol that provided the fuel for the cars that year. This year there were three possibilities. One is based on a line in a new book about the race. I talked to the author on Saturday and am going to save that story for next year, maybe. A second story involves the Missouri connection with A. J. Foyt, considered by some folks the greatest driver in the race’s history.

The third possibility was Robby McGehee, the last Missourian to drive in the Indianapolis 500.

Saturday, the day before the race, I tucked my press credentials into my vest pocket and became just another fan for several hours. Fourteen winners of the race were available for autographs for a short time in the morning. As a reporter, I normally notice them in the pits or the garage area but don’t bother them. But they were out in the public plaza. Fans lined up to get their autographs. And one of those fans (temporary fans in my case) I was in one of those lines, clutching a book about the first 100 years of the Indianapolis 500 by Indianapolis Star racing writer Curt Cavin, who had signed it for me the night before at his annual Burger Bash fund-raiser for people with hearing difficulties. At the front of my line were Johnny Rutherford, who won the race three times, and Parnelli Jones, who had his cap on the right way around that day. I remember these guys from the days when they and their cars were running hot and fast on that track out there, setting new speed records and winning races in an era when the racing world changed from front-engine cars to rear-engine cars.

The speedway also had arranged a four-hour session that afternoon with 100 former drivers invited. Two of them had some ties to Missouri–Robby McGehee and Jimmy Kite. Kite had owned a hobby store in Farmington but told me when I got to his table that he’d sold it a couple of years ago and was living in Indianapolis.

We had talked to Robby McGehee a few times when he was competing. He was the race’s Rookie of the Year when he finished fifth in 1999 ahead of people such as Buddy Lazier, the 1996 race winner; Tony Stewart, now a two-time NASCAR champion; Eddie Cheever, who won the race in 1998; Scott Goodyear, who almost won the race twice and is now part of the television broadcast crew.

Robby gave his Rookie of the Year trophy to his crew chief, Steve Fried, who was critically hurt when the cars of Jeret Schroeder and Jimmy Kite caused Kite’s car to hit Fried, causing serious injuries to Fried. The next year, he had eventual winner Juan Pablo Montoya in sight when a broken spark plug dropped him back to 21st. In all, he ran in five races. In his next to last race he qualified at better than 224 mph for Panther Racing—the team that owned the car J. R. Hildebrand drove this year and almost won with.

He gave up the racing career after that, went into the family insurance brokerage business, married andis now the father of two-year old triplets. He still has his helmets, is fit enough to still get into one of his racing suits (The St. Louis Post-Dispatch last Friday the 27th), and looks like he could still get into one of those cars and have it up to 220-plus pretty quickly. And it was good to be back at the Speedway for the centennial.

The reference to the SAFER barrier refers to his crash at the speedway in 2002, the year the speedway installed new safer walls that cushion the impact when a car hits them. The crash nonetheless broke his leg and a small bone in his back but the results would have been much worse if his car had backed into the regular concrete wall. He missed the race that year.

Robby signed my Cavin book and about 75 of the other former drivers did, too. That was enough for being a fan for one day.

We weren’t expecting a Missouri connection on Sunday, race day. But lo and behold there was one. National Guard Jets had flown over the speedway a couple of times Saturday in what we thought were practice runs fo the pre-race ceremonies on Sunday. But on Sunday, a surprise came in over the north end, flew the length of the track and turned left—just as the race cars do—and disappeared into the distance. One of the fans caught it on his cell phone and in the process caught the excitement of the moment….

“The Spirit of Indiana,” based at Whiteman AFB, made a big impression on this young fan–and on the crowd.

Parnelli drove the roaring Wasp, Jim Nabors sang “Back Home Again in Indiana,” which is almost as sure a sign that the race will start as the green flag is. Foyt drove the pace car to get the field set and in moments 33 drivers started doing things in automobiles that take your breath away. Less than three hours later, Dan Wheldon led the last 600 yards or so when Hildebrand hit the wall on the last turn and won his second Indianapolis 500 driving a car with the number 98 owned by Bryan Herta with Curb/Agajanian Motorsports. The history of the race–the annual story of triumph and heartbreak—was wrapped up in those 600 yards.

It was quite a weekend for fans and reporters alike. And for one person who was both last weekend, when Missouri politics were completely forgotten but Missouri events were in the minds of many, it was pretty darn near incredible.

The Wasp is headed back to the speedway museum. Robby McGehee is back in his Clayton office. I’m back in the newsroom. All three of us needed this weekend. And boy, did the Indianapolis Motor Speedway deliver.