Eighty-four years ago today, Missouri National Guard member Charles Lindbergh climbed into a little airplane paid for by some supporters in St. Louis and took off into the rising sun bound for Paris. Thirty-three hours and some minutes later he landed at a darkened airfield in Paris. 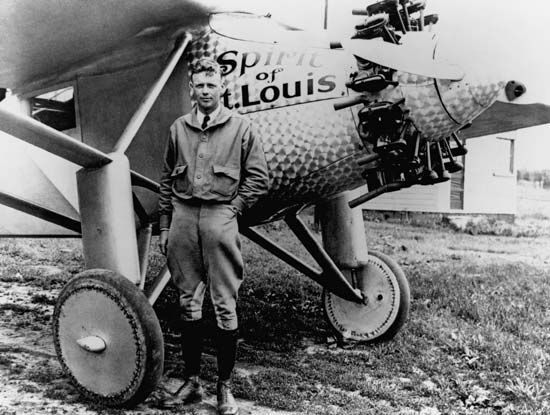 We tell the story on Across Our Wide Missouri today. But we didn’t have time to talk about a lot of things.

The airplane was a little thing without a windshield because a fuel tank occupied the space where the windshield would be. Lindbergh sat in a cockpit that would give some people claustrophobia or cramps and would not be any place you’d want to be for almost a day and a half. His seating space was 36 inches by 32 inches by 51 inches. He could not straighten his legs. And we whine when we have to take a seat in tourist class on a modern airliner for two or three hours. .

Lindbergh was a mail pilot who had trouble flying between St. Louis and Chicago; he parachuted out of two crashing planes in that part of his career.

The History Museum in St. Louis’ Forest Park has an extensive collection of Lindbergh memorabilia. A replica of The Spirit of St. Louis hangs from the ceiling. The original is in the Air and Space Museum in Washington. The replica used in the Jimmy Stewart movie is at the airport in St. Paul, MN.

The first transatlantic flight was made, also in May, eight years before Lindbergh flew to Paris by Lt. Cdr Albert Read and the crew of the NC-4, a Curtiss flying boat owned by the Navy. It was a huge thing for its time, so big that it remains too big to fit in the Air and Space Museum in Washington. Read shares the distinction with his navigators, Walter Hinton and Elmer Stone, pilots James L. Breese and Eugene “Smokey” Rhoads, and radio operator Herbert C. Rodd. The trip took 19 days with water landings for refueling and servicing. The Navy stationed a series of ships along the flight route. Although the Smithsonian owns the NC-4, the plane is on permanent display at the National Museum of Naval Aviation in Pensacola, Florida.

Just a month later, RAF Captain John Alcock and Lt. Arthur Whitten Brown flew from Newfoundland to Ireland. A month after THAT, several people flew nonstop from Scotland to New York in a British dirigible.

And there were others. In fact, a popular newspaper column called “The Straight Dope” recorded in 2003 that as many as 90 or more people had flown the Atlantic before Lindbergh. The column was able to identify 84 who made the flights, 66 by dirigible and the other 18 by airplane.

But Lindbergh did it alone, in a single engine plane named for a Missouri city and financed by supporters in that city, nonstop, New York to Paris.

Lindbergh landed in Paris on May 21. Five years to the day after Lindbergh landed Amelia Earhart, whose hometown of Atchison, Kansas is within sneezing distance of Missouri’s northwest border (it’s named for U. S. Senator David Rice Atchison of Missouri), took off from Newfoundland and completed the first trans-Atlantic flight by a woman when she landed in Ireland the next day.

But Lindbergh is OUR flyer. And this is the day he made his greatest flight.