Wendell Bailey strolled up to our book-signing table Tuesday. He’s older now, kind of shaggy at the chin, but still a talker, still a story-teller.

He was the last Missouri Congressman ousted from his seat because of congressional redistricting. In 1980, when Democrats controlled the redistricting process and Missouri had to drop from ten districts to nine, first-term Republican Bailey found himself thrown into the same district as three-term Democrat Ike Skelton in 1982. He was the Russ Carnahan of his day.

The first time I ever ran across Wendell Bailey was when he was serving in the Missouri House, just after the Missourinet had started operations in 1975. He was a car dealer from Willow Springs at the time. As I recall, he was a member of the House Consumer Affairs Committee. During a committee meeting, this fellow sitting off to the side asked an assistant attorney general, “Is it legal to re-groove used tires?’ I don’t remember the answer but I do remember a question of my own went through my mind, “Who IS this guy?”

It was Wendell being Wendell. He’s the same guy who once opined that he hated going through one of the small towns on Highway 63 between Rolla and Jefferson City that was a notorious speed trap in its day. “I feel like I ought to get out and lead my car through there,” he once remarked.

Wendell called our newsroom one day. I answered the phone. “Put up a tape, I’ve got an announcement to make. I’m running,” he said, not even bothering to say “Hello,” first. “Running for what, Wendell?” I asked him. “I haven’t made up my mind yet,” he said, “but I’m running.”

One year when he was campaigning for state treasurer, his campaign vehicle was an armored truck. Another year it was an old taxicab. State representative, treasurer, congressman, candidate for governor, private citizen, Wendell has always been an irrepressible spirit and it’s always fun to bump into him.

Politics would be a whole lot more fun if all of these people who take themselves so damned seriously had a wide streak of Bailey in them.

This is starting to sound like a eulogy and it isn’t. Wendell looks like he has a lot more miles to go, leading his armored car on re-grooved tires through speed traps.

Other communities losing department facilities are not taking the news well, either. And the hundreds of department employees are facing great uncertainty because the department will be making major staff cuts.

Why is the department in this position? How could a department that has spent billions fixing roads and bridges in the last decade suddenly find itslf in such dire financial straits that it has to take these steps?

The fault, dear reader, lies in ourselves. 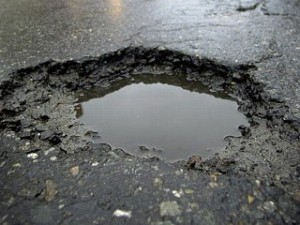 It has been repeated over and over and over. Missouri has one of the largest highway systems in the nation. And the lowest fuel tax. It’s been several years since Missourians were asked to increase their fuel taxes. Missouri voters shouted “no” at the ballot box that year.

The legislature has put off finding a long-term solution by taking short-term actions (the legislature is notable for seeking short-term gratification while delaying or ignoring long-term issues). A few years ago it decided, with voter help, to have all sales taxes on vehicle sales go to the transportation department. It also, with voter help, approved a big bond issue that provided the funds the department used to patch up bad roads and put new, smooth overlays on top of deteriorating road bases. It launched a program to do something about the 800 worst bridges in the state.

Now it’s time to pay the piper. The gas tax is still the lowest. The road system is still one of the biggest. Now the department has to divert millions of dollars from its already inadequate funding to pay off the big loan it got through that bond issue. That means there’s not enough money for hundreds of workers or the district office in Willow Springs and similar offices in some other cities. That means a lot of other things, none of them good.

The legislature has no more temporary funding rabbits in its budget hat for the transportation department. Our lawmakers, rather than taking the lead on finding additional funding for this and other issues, easily speak “living within our means” and of “job-killing tax increases.”

Some in the transportation department faced with loss of employment because the department is living within its means might be thinking in terms of “job killing LACK of tax increases.”

For years our lawmakers have told us that any new financing ideas for transportation are going to have to come from industry groups, not from the legislature. Industry groups have not shown any great flashes of brilliance when it comes to raising the money the state needs to keep their own companies–and the jobs they provide— busy pouring asphalt and building bridges.

And Missouri voters, who seem by their reactions at the ballot box, do not seem to be interested in paying for many of the things they think government should provide them, things like transportation department district offices in places like Willow Springs.

We apologize if this sounds like it was written by another one of those liberal tax and spend journalists. Actually it was written by a journalist who hates potholes and who doesn’t expect something for nothing, which sounds kind of like some of the attitudes he hears from the conservatives he covers. He has done, as he has heard legislators say so often “more with less.” But sooner or later, the fact of the matter is, or the reality is, (other well-worn phrases often spoken in debate) there comes a time when you can only do less with less. The transportation department has reached that point. That’s what brought Wendell Bailey to the capitol this week.

It was good to see him again. Too bad we can’t fill a pothole with irrepressible spirit.

One thought on “Pay me now or pay for it later”