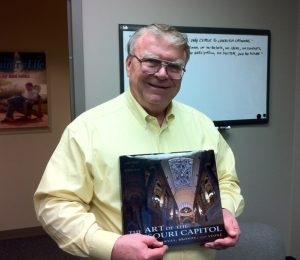 The Book is out. The first fifty copies arrived in Jefferson City Saturday. Several hundred more are coming today.

No, The Book in this case is not the Bible. It’s the Capitol book that co-author Jeffrey Ball and I have worked on for a decade. The University of Missouri Press has taken our words, combined them with some outstanding photography by Jefferson City photographer Lloyd Grotjan, and legislative photographers Tim Bommel and Harrison Sweazea, as well as archival photographs borrowed from London to Taos, New Mexico to publish a stunningly beautiful book, THE ART OF THE MISSOURI CAPITOL; HISTORY IN CANVAS, BRONZE, AND STONE.

Pardon the gushing, please. Even if we had not invested all this time in chasing research leads and composing the manuscript, we would be impressed by the incredible editing and layout done by the folks at UMP.

Of course, they had some pretty incredible visuals to work with. I’ve been in a majority of the state capitols and none can match the decorations of Missouri’s capitol either in quantity or in quality.

So after all this time, there is this beautiful 5-pound, 11.5-ounce, 400 page book. Our capitol deserves such a book. Somebody had to write one. Destiny, circumstance, predestination, the alignment of the planets, divine guidance–whatever word or phrase is appropriate to your philosophy—made us the somebodies.

The book’s coming-out event will be tomorrow, Tuesday, May 10th, when Jeff and I do a signing of the first copies in the third-floor rotunda at the capitol, an area many think of as the most beautiful part of the building, surrounded by Sir Frank Brangwyn’s towering (22×45 feet) murals. There’s another signing next Saturday at the Salt River Festival at Mark Twain Lake and a third one at Downtown Book and Toy in Jefferson City on the 18th.

The good Lord has seen to it, however, that I not become too inflated about this book. Earlier this morning I was showing it to one of our dear friends, a secretary in our company who has helped in so many ways by copying photos and postcards and documents that were part of the research for all these years. I listed her in the acknowledgements.

And I misspelled her name.

Authors live with the lurking fear that the final, finished, permanent product will contain a mistake that hides throughout the editing process regardless of the care that is exercised in repeated reviews of the material and waits to spring from the printed and bound page, snarling about the writer’s incompetence.

This day, a day I planned to spend basking in the praise of others, begins cloaked in guilt. It’s all so… Lutheran.

(I say that not because I’m a Lutheran–I am not—but because I have listened to Garrison Keillor’s interpretation of Lutheranism for so many years.)

We live in a state that has a capitol unique among statehouses. Jeff and I hope this book encourages pride in it, in its art and in the history captured in that art. We hope readers will come to understand that these are not mere paintings by some local folks who learned their techniques from schools that used to advertise on the inside of matchbook covers but are paintings, sculptures, stained glass windows, and tapestries created by some of the greatest names in American art, with a big assist from one of the United Kingdom’s greatest muralists.

There are some in the capitol who do not recognize the greatness around them, perhaps because they are so absorbed by the greatness they might erroneously believe exists within themselves. In adopting that attitude they fail to realize the value of the capitol as a symbol of our state and fail to realize that amidst the greatness of its art there are serious flaws in the building that need repair and correction. Maybe this book, if they care to read it, will encourage them to recognize that combination of greatness and flaws that make our capitol a true symbol of our state and its people. And perhaps they will, while acknowledging the greatness of both the building and the state, become more motivated to correct the flaws in both.